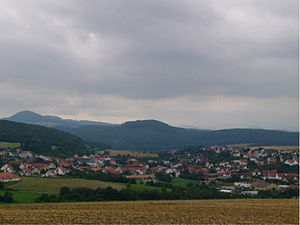 Hofbieber is the capital of the large community of Hofbieber , which has existed since December 31, 1971, and a recognized climatic health resort in the Rhön Nature Park .

The derivation of the name of the place is controversial. Two variants turn out to be the most likely:

The first documented message about a villa Bibarahu comes from the 9th century , according to which a certain Egilmar († 850) and a certain Meginolt († 864 ) the Fulda Monastery , which at that time was under the direction of the well-known abbot and later Archbishop of Mainz Rabanus Maurus , donated a cleared area on September 10, 825. However, the specified area is not actually located exactly at the location of Hofbieber, but rather at that of Niederbieber or Langenbieber , so that one of the latter two locations can be regarded as the oldest location in the Hofbieber municipality, while Hofbieber itself is considered to be younger got to. Incidentally, for a long time the town of Niederbieber was undisputedly the 'original place' in research, but since 2003 at the latest, Hofbieber and Langenbieber have also been fighting for the crown - however, it seems to be the least achievable for Hofbieber, which is supported by the following reasons:

When the places Obirenbiberaha were renamed in Hofbieber and Biberaha in Langenbieber and why this happened, remains to be seen at the moment.

The documents of the von Eberstein family, who were probably in possession of this area for a long time, provide actual evidence of the place under the name Hofbieber . The first written mention seems to come from November 11, 1300, when the name Hovebibera is mentioned. Another reference comes from the end of the 14th century (1388), Apel von Eberstein is said to have owned the hoff tzu Bibra under Bibersteyn . Another documentary mention comes from the year 1404, when there is talk of good ones that are located in Hofbybra .

History of the Court of Justice Hofbieber

The lower court , the village court , was held under the village linden tree. In the center of the village, the Lindenplatz near the church, the rectory and an old tavern, there is still an imposing linden tree , which, however, was built in 1913 by students from the village school under the direction of teacher Franz Xaver Beck on the occasion of the 100th anniversary of the Battle of Nations was planted near Leipzig . The tree was supposed to call for peace, and the First World War began a year later.

For centuries, Hofbieber was the seat of the central court of the Bieberstein office belonging to Fulda . The Central Court was responsible for the high level of jurisdiction , i.e. the jurisdiction for more serious offenses with the ban on blood .

The court was held in the open "on the mountain byneben dem dorff". The field name Die Zehnt (derived from Cent or Zentgericht ) reminds of this. A stone table, surrounded by stone benches, is said to have stood there. Twelve lay judges , who were initially elected and later appointed by the abbot of Fulda, sat in court over the defendants from the village population under the chairmanship of the centgrave . It was reserved for the lay judges to pass the judgments , but they had to be confirmed by the Bieberstein Oberamt before they could be enforced. For the court at Hofbieber there were at least two, maybe even three gallows mountains with an associated gallows field . One was very close to the place of the court on a hill opposite (today Georgshöhe). The second was on the other side of the village, also on a hill (today Hofberg). A third location of a gallows is believed to be in a forest near the village of Rödergrund (today the Black Cross ).

The Zentgraf or Oberamtmann was the representative of the Fulda abbot who, as the holder of the office of Bieberstein and as the prince abbot, also held secular jurisdiction. The Zentgraf originally had his place of residence in the village of Hofbieber. It is believed that the property was roughly at the site of today's TeGut supermarket, i.e. in the center of the village. Since 1665 he lived in to Langenbieber belonging, Schloss Bieberstein .

A well-known Zentgraf from Hofbieber

Balthasar Nuss , who was Count Count von Hofbieber from 1592 , achieved a gruesome degree of fame . As a quasi right hand of the Fulda abbot Balthasar von Dernbach , he followed him to Fulda in 1603 to take the place of the count. Balthasar von Dernbach also entrusted him with carrying out the witch trials in the entire bishopric . For three years he raged in the most gruesome way and managed in this short period of time to torture around 300 alleged witches and warlocks and then to have them executed. That he was still in contact with Hofbieber during this time can be seen from the fact that he owned two Hintersiedlergüter and some fields and meadows here. This can be seen from the trial files that stem from the trial against him for enrichment in connection with the witch trials.

Wine growing and serving in Hofbieber

In the early modern period , the landlord zu Hofbieber, as the main place of the central court, also held the concession of the sole wine bar in the entire district. This privilege had been granted to him by the sovereign, i.e. the abbot of Fulda. It included the exclusive right to certain festivities, e.g. B. Kirchweih , wedding celebrations , "baptism, wine and purchase collieries" , serving wine.

Although this naturally aroused the resentment of the landlords in the surrounding villages and there were repeated breaks and arguments, this privilege was confirmed again and again. B. in 1703.

The economy of the village Hofbieber was right next to the rectory on the place of the village court (today Lindenplatz ). With today's restaurant Sondergeld, there is still an inn at this point. The original, still z. The foundations of the building, some of which have been preserved, may even date back to the Middle Ages.

In this context, a message from 1842 from a chronicle of Hofbieber is interesting. Here the pastor Schmitt reports the following: “The summer was very dry, but individual thunderstorms in the local area meant that the fruit harvest was very good in grain and quality, and there was a lack of hay and straw. The harvest came home very early. The vine also delivers only very good quality, but small quantities. ” (Quoted from: Kronik from Hofbieber beginning with 1788, recorded by Pastor Joseph Anton Schmitt, translated and illustrated by A. Spors, in: Hofbieber 1093–2003, p. 89 .) - It is hard to imagine today, but once you could harvest grapes in Hofbieber.

"The Rhön Cathedral" at Hofbieber

Hofbieber is a Catholic place because it is in the area affected by the bishopric of Fulda . It is believed that the first church in Hofbieber was built around the 11th or 12th century. It is very likely that an old Germanic sacrificial site or thing site was chosen as the location . However, it was not until the 13th century that there was reliable evidence of the existence of a Christian church (a sketchy list of Hofbieber's pastors).

The oldest surviving testimony from an old church in Hofbieber - probably from a building that was built around 1500 - is the font from 1520, which still occupies a central place in the subsequent building. An enlargement of the church for the year 1604 is documented for the period of the late Middle Ages and the early modern period . At that time, the transept was added to the north-south direction and a chancel was added to the east, so that a cruciform church was created.

Hofbieber had to be content with this building until the late 19th century - and the older the building got, the more the place suffered from the dilapidation and crampedness of its church. It even got to the point that, due to the acute danger of collapse in the 1870s, services were held on Sundays and public holidays in the church of the neighboring Niederbieber, while the weekday services were held in the rectory. The church was poorly repaired and then returned to its intended use.

The lack of money was to blame for the fact that the old Kreuzkirche zu Hofbieber, consecrated to St. George, was only demolished shortly before the turn of the century and replaced by a new building. At that time, too, the demolition of the old church could only be financed through donations and the new building was only possible because many Hofbieberers personally helped. It is reported that bricks were burned themselves, that harness owners not only made their teams available, but also drove them themselves, sand pit owners donated the necessary sand free of charge, and forest owners provided lumber. Thanks to the active help of the Hofbieberers, the new church, the foundation stone of which was laid on August 12, 1898, was consecrated on June 30, 1901. In Hofbieber people like to speak of the Rhön Cathedral - but there are other churches in the Rhön that claim this title for themselves.