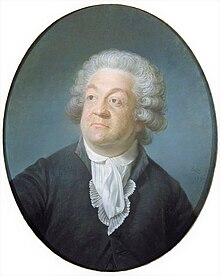 The Fort de Joux , one of his detention centers

The house in Paris where Mirabeau died

Mirabeau's father was the French economist ( physiocrat ) and writer Victor Riquetti , Marquis de Mirabeau . His younger brother André Boniface Louis Riquetti de Mirabeau was a loyal colonel and an opponent of the revolution. When he was three years old, Mirabeau contracted smallpox , and he wore the scars on his face all his life. He received neither donation nor financial support from his father and joined the military as a young man.

During his legal studies at the University of Aix-en-Provence , Mirabeau made the acquaintance of Jean-Étienne-Marie Portalis , one of the future editors of the Civil Code . He lived in Paris from 1771, where he married Marie Emilie de Marignane in 1772. At the announcement of his father he was of Louis XV. banished from his possessions.

In 1774, his father demanded his imprisonment in the Château d'If near Marseille, where he was imprisoned for almost a year , in order to “put him on the right path” . In order to remove him from the control of his creditors, his father had him installed several times in the donjon of Vincennes Castle and finally spent him in the Château de Joux in the Jura. Here Mirabeau asked the governor several times for leave of detention and on these occasions went to Pontarlier , where he, on the occasion of the celebrations for the coronation of Louis XVI. Marie Thérèse de Monnier, who was married to a marquis fifty years her senior . Mirabeau and de Monnier fell in love and fled to Switzerland . He was sentenced to death in absentia for kidnapping and adultery and arrested again in 1777. He managed to have his death sentence annulled. However, he soon had to go back into exile after intervening in a lawsuit between his parents. From January 1786 to January 1787 he stayed twice in Potsdam and Berlin for several months . In Braunschweig he is said to have become a member of the Illuminati Order with the order name Adramelech / Leonidas , but this is not clearly proven. He then stayed in Holland , where he became a Freemason in Amsterdam . He later moved to London .

During the early days of the French Revolution , Mirabeau was a deputy and spokesman for the Third Estate in the Estates General and a member of the Society of Thirty . The nobility assembly of Provence had refused to allow him to be elected as a member of the second estate, as he lacked a fiefdom, so that he stood for election in Aix-en-Provence and Marseille for the third estate. When the Estates General opened, he published his own uncensored newspaper, the Journal des Etats-Généraux . In 1790 he became president of the Jacobin Club and in 1791 held the presidential chairmanship of the constituent national assembly .

Mirabeau died suddenly on April 2, 1791, so that one suspected poisoning. He was buried in a state funeral in the Panthéon after a ceremony in the Saint-Eustache church. After further evidence of his connections to the royal court of Louis XVI. had been found, his body was removed from the Panthéon on September 21, 1794, replaced by the Jean Paul Marats and buried in the cemetery of St-Étienne-du-Mont . In 1798 Mirabeau's sister obtained his exhumation and had him buried in a mass grave in Paris. Despite research in 1889 to mark the centenary of the revolution, the body has not yet been found.

The political and literary work

Like other enlighteners , Mirabeau presented the British constitutional monarchy with the Bill of Rights as a model for a model of society to be striven for. Jewish emancipation also belonged to his ideas of a civilized society . This was particularly evident in his essay, published in 1786, “About Moses Mendelssohn and the betterment of the Jews” . In it, the atheist Mirabeau used himself on behalf of the devout Jew and German enlightener Mendelssohn in order to make him known in France. He discusses his career and merits, goes into the persecution of Jews in Europe and castigates racial hatred as a perversion of the spirit. The quintessence of his human rights plea:

“Are there no natural rights that are older and more sacred than all social conventions? It could only bring salvation to the human race if one finally forgot the difference between citizens and strangers and saw people first and foremost in all. "

In the elections to the Estates General in May 1789, Mirabeau was a member of the Third Estate. From the new perspective after his stay in England he saw the nobility and the church as the main obstacles to freedom. He was instrumental in the abolition of the privileges of the nobility and in the confiscation of church property. However, he continued to regard a king bound by the constitution as a necessary part of the political system. On January 29, 1791, the deputies elected him President of the National Assembly . Mirabeau's popularity suffered a setback when his close ties with the king, whom he had secretly advised and from whom he had funded his lifestyle with considerable sums, became known posthumously.

Mirabeau's reply to the master of ceremonies on June 23, 1789, Alphonse Lamotte after Jules Dalou

Mirabeau is known, among other things, for the answer with which he rejected the royal master of ceremonies on June 23, 1789 when he wanted to dissolve the meeting of the Estates-General.

Heinrich von Kleist describes Mirabeau's appearance very clearly in his essay On the Gradual Production of Thoughts While Talking :

(...) I remember that “thunderbolt” of Mirabeau, with which he dispatched the master of ceremonies, who after the last monarchical meeting of the king on June 23rd, in which he had ordered the estates to separate, in the meeting room in which the estates lingered, returned, and asked whether they had heard the king's command? "Yes," replied Mirabeau, "we have heard the king's orders" - I am certain that, with this humane beginning, he did not yet think of the bayonets with which he closed: "Yes, sir," he repeated, “We heard him” - you can see that he still doesn't quite know what he wants. “But what entitles you” - he continued, and now suddenly a source of tremendous ideas dawns on him - “to imply orders to us here? We are the representatives of the nation. ”- That was what he needed! “The nation gives orders and receives none” - to jump straight to the top of presumptuousness. “And so that I can explain myself to you very clearly” - and only now does he find what expresses the whole resistance to which his soul stands ready: “So tell your king that we have no other places than to the violence of the Bayonets are abandoned. "- Whereupon he sat down on a chair, complacent. (...)