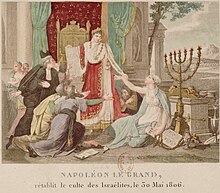 Napoleon the Great restores the cult of the Israelites. May 30, 1806.

As Jewish emancipation is the distance of the Jews from the edge of the Christian majority society, where they were legally, religiously and socially discriminated minority, in the center of society. Their incorporation began with recognition as equal citizens since the Age of Enlightenment .

The term “Jewish emancipation ” appears from 1817 onwards. Until then, the subject was described as "civil improvement", " naturalization " or " equality " of the Jews.

Discussions about the civil integration of Jews already existed in England at the beginning of the 18th century. In 1714, John Toland wrote Reasons for Naturalizing the Jews in Great Britain and Ireland . In 1753 both houses in London approved the Naturalizing Bill , which however had to be withdrawn under pressure from public opinion.

Human rights granted regardless of religious affiliation became a hallmark of the secularized nation state : first in the USA with the Bill of Rights 1776, then in France after the French Revolution of 1789. On September 27, 1791, the French National Assembly proclaimed the equality of all French Jews. In the German areas under French influence by Napoleon , the Jews were emancipated without reservation, for example in the Grand Duchy of Berg , in the Kingdom of Westphalia and in the areas on the left bank of the Rhine .

In the German-speaking countries, the legal equality of the Jews was not achieved in a single state act of sovereignty , but gradually and in many individual steps from 1797 to 1918. Concessions to the Jews were often restricted again and made dependent on the success of the "educational policy" towards the Jewish subjects .

For centuries, Jews in Europe were marginalized. Even after they were granted citizenship status by the constituent national assembly of France in 1791, they still had little chance of entering civil professions and remained primarily moneylenders and small traders. This should be counteracted by further decrees in 1808. However, they went hand in hand with encroachments on Jewish community life, restrictions on previous freedom of movement, control and licensing of commercial activities, and restrictions on the means to assert Jewish legal claims. These measures should remain in force for ten years. They were not intended to disrupt the emancipation process, but to accelerate integration into Napoleonic society. After Prussia took possession of the Rhineland in 1815, these provisions were extended again and again and thus led to ongoing restrictions on citizenship rights for Jews.

With the Jewish edict of 1812 , the last of the reforms introduced by Karl August von Hardenberg , Prussia granted the Jews citizenship. In Baden the process of legal equality began with the Jewish edict of 1809 , but did not come to an end until 1862, in Bavaria with the Jewish edict of 1813 , and in Württemberg in 1828 with the law on the public relations of fellow Israelites . In the last two territories mentioned, however, after intermittent setbacks, development did not come to an end until 1871 with the constitution of the German Empire . In Austria, in 1867, the Basic Law on the General Rights of Citizens established legal equality for Jews. In revised versions of the Swiss Federal Constitution , Jews were granted freedom of settlement in Switzerland in 1866 and finally in 1874 the right to exercise their religion freely. From 1874 onwards, all Jews in Western and Central Europe were citizens of their states with equal rights.

During the Nazi era , the Nuremberg Laws of 1935 deprived Jews of all basic rights in Germany after they had been discriminated against since 1933. From the Wannsee Conference in 1942 at the latest , the extermination of the Jews was the aim of the National Socialists.

Even during the time of enlightened absolutism , the first decrees improved the situation of Jews in Europe. The “ tolerance patent ” of Emperor Joseph II of January 2, 1782 issued Austrian Jews the “ body toll ” (a poll tax ), abolished the “Jewish houses” ( ghettos ) and granted them freedom of trade without citizenship and master craftsman rights. To do this, they had to send their children to German-speaking, mostly Christian schools. They were also only allowed to learn their trades from Christian masters. The Yiddish- speaking Jews were also supposed to be adapted to the Christian-German culture in order to come closer to Joseph's goal of a centrally administered Habsburg monarchy with the German state language. He wanted to make Jews more useful and useful to the state , as the patent specifically emphasized.

Typical of this phase of utilitarianism is the influential work on the bourgeois improvement of the Jews (1781) by the Prussian lawyer Christian Wilhelm von Dohm . His friend, the Jewish philosopher Moses Mendelssohn , and his publisher Friedrich Nicolai prompted Dohm to write this book. The enlightener discusses the idea of ​​integrating Jews into the nation and thus making them useful for society. Guided by the enlightenment thought of natural law , he describes possible measures to "improve" the Jews. However, Dohm did not interpret the “greater corruption” of the Jews in a racist way, but rather as a result of their discriminatory, constitutionally enshrined social position. The concept was based on the general hypothesis , which was also shared by the Enlightenment, that Jews were socially harmful to the state and relied on their upbringing and assimilation as a precondition for legal concessions to them. From Dohm's point of view, civil rights for the Jews were a necessary step in order to help the idea of ​​a homogeneous nation state achieve a breakthrough. This became the model for reforms in many European countries.

From the French Revolution to the Congress of Vienna (1815)

The profound social change to a bourgeois society broke the political, philosophical and religious fetters of the traditional class societies . The idea of ​​a nation of citizens with equal rights and duties, which was enforced in the French Revolution , naturally raised the question of how to deal with the Jews.

First of all, the constituent national assembly excluded Jews from the declaration of human and civil rights of August 26, 1789 and discussed heatedly whether they should be naturalized or expelled. In 1791, however, it then almost unanimously granted all Jews in France the status of citizens ( citoyen ) if, in return, they renounced their status as a community. This brought the Jews civil rights for the first time in a European country. They lost their previous partial autonomy and had to do military service.

With the introduction of consistory in 1808, Napoleon underpinned the administrative equality of Jews and enforced it in the conquered areas on the left bank of the Rhine, but met resistance on the right bank of the Rhine. Nevertheless, from 1800 to 1812 almost all German states followed Dohm's demands.

As part of the Prussian state reforms, Friedrich Wilhelm III. 1812 the edict concerning the civil conditions of the Jews . It gave Jews state and municipal citizenship, the right to vote, freedom of trade and freedom of establishment, and also allowed them to take up academic professions. It continued to exclude her from the higher civil service; moreover, it was only valid in old Prussian, not newly conquered areas and only for the Jews who were already resident, not for newcomers and Jews without a residence permit. According to a report by Friedrich Schleiermacher from 1810, Jews also had to take part in Christian denominational religious instruction in Prussia in order to be allowed to study at universities .

German Jews often took part voluntarily in the anti-Napoleonic wars of liberation and then tried to petition to claim their full civil rights. At the Congress of Vienna in 1814, Wilhelm von Humboldt tried unsuccessfully to extend the Prussian Jewish edict of 1812 to the German Confederation . The southern German states and the northern German Hanseatic cities in particular prevented this and instead passed laws that allowed the emancipation measures decreed under French rule to be withdrawn.

Further development in Germany until 1871

In the next decade, many states of the German Confederation revoked at least some of their previous concessions. In the wake of the Hep-Hep riots of 1819, there were even expulsions again ( Lübeck ). In 1822 the king banned Jews from apprenticeships in Prussia and dismissed them from all civil service. This made the assimilated, educated Jews in particular unemployed. The Prussian professional bans remained in force until 1850 , so that Jews continued to only have despised professions such as junk trading, peddling, pawnbroking, cattle and grain trading. Then they were allowed to do small businesses: many Jews were now glasses and watchmakers, jewelers, sellers at trade fairs, and leather and textile dealers.

From 1830 the liberal democrats demanded the "bourgeois improvement" of both Jews and peasants in order to abolish the feudal class society . In particular, the intellectual and already assimilated Jews were now baptized many times in order to gain access to educational opportunities and secure income. Even Heinrich Heine saw in baptism the "Entreebillet to European culture." Around 30,000 out of a total of 590,000 German-speaking Jews chose this route by 1900.

Jewish publicists, journalists and politicians such as Gabriel Riesser , who had published works on the emancipation of the Jews from 1831, opposed conversion and emigration and instead fought for full equality. He ensured that the Frankfurt National Assembly in 1848 included a passage on religious freedom in the basic rights of the German people :

"The enjoyment of civil and civic rights is neither conditioned nor restricted by religious denomination."

Between 1849 and 1871 there was almost no literary discussion about the emancipation of the Jews. This took place mainly in the state parliaments. The Catholic faction in Prussia, which was also a minority there, stood up for the basic rights of the Jews. This led to protests from their supporters in the Rhineland and Westphalia. From 1858 she changed her “Jew-friendly” attitude, which led to the anti-Jewish attitude of the center in the Kulturkampf .

In 1862 the liberally governed Grand Duchy of Baden was the first German state to grant Jews unrestricted equal rights. The Free City of Frankfurt followed in 1864 . In the Austro-Hungarian Compromise of 1867, the legal equality of Jews in Austria and Hungary was anchored. In July 1869 Otto von Bismarck signed the “Law concerning the equality of denominations in civil and civic relationships”, which was passed in the North German Confederation by the Rostock lawyer and democrat Moritz Wiggers , which put Judaism on an equal footing with all other denominations:

“All remaining restrictions on civil and civic rights that are derived from the difference in religious beliefs are hereby lifted. In particular, the ability to participate in community and state representation and to hold public offices should be independent of religious denomination. "

After the accession of the southern German states in 1870/71, the law on Article 80 of the Federal Constitution of January 1, 1871, also applied there.