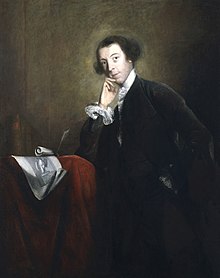 Horace Walpole, 4th Earl of Orford (born September 24, 1717 in London , † March 2, 1797 ibid) was a British writer , politician and artist . He is considered both the founder of the Gothic Novel and the English landscape garden . In 1754 he coined the neologism Serendipity in his letters , which the sociologist Robert K. Merton then naturalized in scientific linguistic usage.

Horace Walpole was born the fourth child of the first Prime Minister of Great Britain (the first Prime Minister of Great Britain to be named Prime Minister), Sir Robert Walpole (1676–1745), and his wife Catherine. He grew up with his mother, who was practically separated from her husband, who was openly cheating on her. After she died in 1737, Robert Walpole immediately married his mistress. From 1727 Walpole attended, as usual in the British upper class, the Eton College , where he made friends with the poet Thomas Gray (1716–1771) and the poet Richard West, who later became very popular with his contemporaries . From 1734 he attended King's College in Cambridge , where he studied music , mathematics and anatomy , but, as was common among noble gentlemen at the time, did not graduate.

In 1739 he started with Thomas Gray on his Grand Tour , a tradition common among rich young men of the British upper class, to "cast off the horns" and to visit sights on a round trip across the continent . They left Dover on March 29th and reached Calais late in the evening. They traveled via Boulogne-sur-Mer , Amiens and Saint-Denis until they finally arrived in Paris on April 4th .

He soon fell out with Gray, but later remained on friendly terms with his childhood friend. Some authors suggest that Walpole was homosexual and already got involved in Eton and Cambridge with Henry Pelham-Clinton, 9th Earl of Lincoln . When they met in Italy, that aroused Gray's jealousy. But this is controversial. In Florence he met the well-known travel writer Lady Mary Wortley Montagu and made friends with the British ambassador Horace Mann , whom he later kept up to date on the events in the United Kingdom in a lively correspondence.

On his return to Britain, his father provided him with a number of electoral districts and he sat in the House of Commons from 1741 to 1768 . His father also made him a number of well-paid government posts. In 1791 he inherited the title of Earl of Orford after the death of his nephew . Walpole remained unmarried.

In 1747 Walpole bought a small country house in Twickenham on the Thames (near London ) called Strawberry Hill . He converted this house into a bizarre Gothic castle in several phases until 1776. His style founded the neo-Gothic and was, for example, a model for the Gothic House in Wörlitzer Park . He gave a small villa nearby, which he also owned, to his friend, the well-known English actress and soprano Kitty Clive , whereupon it was named Little Strawberry Hill . Strawberry Hill is now owned by a foundation and can be visited.

Walpole as a writer

In 1764 Walpole published the novel The Castle of Otranto under a pseudonym as an alleged translation of an Italian text from 1529. When this novel achieved an unusual success, Walpole confessed to authorship in the second edition in 1765.

In The Castle of Otranto , the destructive work of a powerful father figure (Manfred) is portrayed for his family, who tyrannically and scheming worries about the genealogical succession when her weak son is slain by a mysterious giant helmet. Manfred, now without a son and heir, then follows the son of the promised bride Isabella, whom he had abducted for him beforehand in order to establish a connection between his principality of Otranto and the domain of the Marches of Vicenza, whose daughter is the bride. Now Manfred wants to rape Isabella, then expel his submissive wife Hippolyta in order to be able to marry Isabella. Isabella, however, dreads her old, sinister persecutor and tries to flee from the castle of Otranto shortly after Manfred's "application", where she is helped by a noble farm boy who is sentenced to death by Manfred's tyrannical indecision and injustice.

As in architecture, Horace Walpole opened a new chapter in literature with his text, the horror novel (English: Gothic Novel ). The castle of Otranto is considered to be the prototype of the genre of horror romance , but is still fully committed to the enlightenment of reason and morality. It was Matthew Lewis ' The Monk (1794) that broke with the values ​​of the Enlightenment.

The castle of Otranto is set in Italy at the time of the Crusades, but the model for the castle is not in Otranto ( Apulia ). As Walpole explained in one of his many letters, it is his country house Strawberry Hill , which through the years of renovation had become a winding castle with many halls and corridors.

His second great success and a large part of his fame came with the book “About English Garden Art” ( Essay on modern gardening), published in 1794 , in which he describes the concept of the English landscape garden.

His nearly 3,000 letters are considered an important source for 18th century Britain. Walpole had its own print shop, in which his works and also those of Thomas Gray appeared. Other books by him are a catalog of the extensive art collection left by his father, Catalog of the Royal and Noble Authors of England (1758), the play Mysterious Mother (1768), which is about incest and which was never performed during his lifetime was, Historical doubts on the life and reign of Richard III. (1768), Letters of Xo Ho to his friend Lien Chi at Pekin (1757), Memoirs of the last 10 years of George II. , Memoirs of the reign of George III. and Anecdotes of painting in England (in 4 volumes 1762–1771).

The Letters of Horace Walpole, Earl of Oxford: incl. Numerous letters now first published from the originals as a six-volume complete edition of his letters was published posthumously by Richard Bentley in London in 1864 .

"The world is a comedy for the thinker, but a tragedy for the feeling."