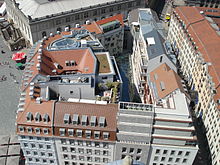 Inner-city block at Neumarkt in Dresden 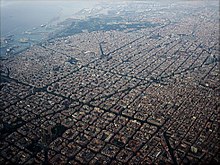 The Eixample in Barcelona : An example of a city ​​district that is predominantly characterized by closed blocks of houses

A block of houses ( apartment block , square , also street block ) describes a built-up area in a settlement area, which is surrounded by the network of paths and roads or by topographical conditions (e.g. railway line, river) and consists of several directly adjoining properties or parcels and their exterior Block margins . The building block represents a typical inner-city design . It is formed by multi-storey apartment buildings , residential and commercial buildings or terraced houses in a closed construction . This type of construction is also known as perimeter block development .

The block development is a typical urban design . This design was already used in the medieval European city centers of the Hanseatic cities. The design can also be found in baroque inner cities such as the Dutch Quarter in Potsdam. It is particularly typical of absolutist urban planning and the tenement districts of major German cities that were built after 1870 during the Wilhelminian era . In response to the housing shortage of the 1920s, housing associations built apartment blocks with large courtyards and small social apartments. At the same time, however , city ​​planners were also looking for alternatives to the then largely dominant perimeter block development and found these in the row construction method , i.e. H. in the parallel arrangement of several rows of houses. The advantages of this type of construction, which were particularly widespread in Germany during the reconstruction period in the 1950s and 1960s, are primarily the even tanning of all apartments and the better ventilation of the neighborhoods .

While blocks of houses emerged throughout the Middle Ages through the usually unplanned juxtaposition of neighboring buildings , they were already built in antiquity (examples of this are Miletus and the Roman City model , which follow a checkerboard pattern ), and since the Baroque era, urban planners have reinforced them "on the drawing board “Designed as a large geometric shape and then parceled out for development .

Building blocks also form the basic spatial structure for collecting statistical data on the population structure . When visualizing 3D city models, one often works with simplified solid bodies that are supposed to correspond to the real building blocks .