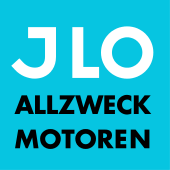 The term ILO comes from the artificial language Esperanto and means "tool". 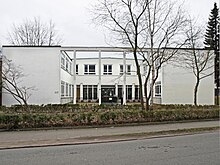 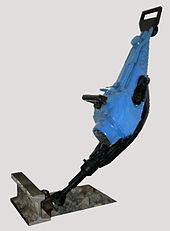 Motorbike around 1930 with an ILO engine 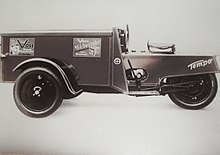 The company was founded in 1911 in Altona (Hamburg) . There the founder Heinrich Christiansen bought a machine factory that had gone bankrupt . Under the company Norddeutsche Maschinenfabrik GmbH , he initially employed around 25  people . In particular, devices for the track and bridge construction of the Prussian state railways were manufactured . Two years after the company was founded, the premises in Altona had become too small. Christiansen bought a site at the railway station of Pinneberg . A small hall was built there for production and the office space was located in the extension. The track tamping machine developed for railway construction continued to be built during the First World War . This was a device that was used to compact the ballast between the sleepers . Around 1918 a two-stroke engine was developed that made the device independent of other power sources. This was practically the first ILO engine.

Development between the wars

Now the company concentrated on the construction of two-stroke engines for motorcycles and small trucks . Almost all major German manufacturer of motorcycles built the engines in their vehicles. Around 1927, a bicycle auxiliary motor was developed, which was one of the first powerful drives for bicycles. From 1929 two-stroke engines were offered for agriculture; there were, for example, tillers and pumps with ILO engines. Since 1922, the company has grown steadily until around 1930 the name ILO was above the entrance.

In the 1930s, the two-stroke engines for three-wheel delivery vans were a big hit. The models Tempo (Vidal & Sohn) and Goliath ( Borgward ) ran engines from ILO. In 1931, a unicycle carriage pusher for moving railway wagons was launched. It was sold successfully for many years. The ILO two-wheeled engines found it increasingly difficult to prevail against the competition from DKW , NSU and Sachs . The Bastert-Werke in Bielefeld, on the other hand, obtained their entire range of engines from ILO. By the Second World War , the number of employees grew to 300.

During the Second World War, engines were almost exclusively manufactured. Since these were mainly used for military purposes, the factory was declared an armaments factory and Christiansen was appointed military manager. Around 160 slave laborers were used during the war . They lived in barracks on the factory premises. The factory facilities remained intact during the war; no bombs hit the plant.

After the Second World War, the ILO plant was fully operational and Heinrich Christiansen jun. took over the management of the plant. There was also hardly any dismantling by the British occupying forces . They started making crutches , egg cups , lighters and other items that were urgently needed after the end of the war. The engine construction was out of the question, but engines of the British Army on the Rhine were repaired and the first orders for vehicle engines also came from the occupying forces. 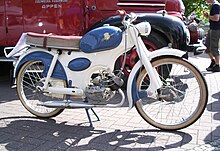 The first two-stroke engines for civil purposes were manufactured again from 1947. The Hamburg company Vidal & Sohn was one of the first customers. It started again with the production of the TEMPO three-wheeled trucks and continued to build ILO engines. From 1948 onwards, a wave of motorization began. For most, it started with the purchase of a motorcycle . In the following years, ILO experienced a boom in orders, but they were well equipped for this challenge, as the plant was almost completely intact. The engines from the pre-war years were continuously improved. Many motorcycle manufacturers opted for the ILO engine. Among them were well-known motorcycle manufacturers such as Bücker , Dürkopp , Geier , Göricke , Hercules , Hoffmann , Maico , Rixe and Tornax . A few small automobile manufacturers, such as Kleinschnittger , Staunau and Wendax , also equipped their small cars with ILO engines. By 1950 the number of engines produced had risen to around 56,000 units and the number of employees had risen to around 600. They started working in three shifts to keep up with demand. But the existing production area was no longer sufficient. In 1950 the factory was enlarged to 8,750 m². At the same time, another plant was built in Munich , the ILO-Werke Süd. 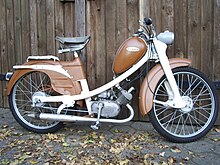 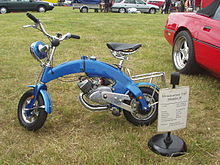 Mainly Mokick motors and the famous ILO piano motor were built there, which was called piano (Italian = quiet) because there was no loud chain running in the motor, but a quiet toothed belt. Probably the best known and most successful engine was the ILO Twin (M 2 × 125) with 250 cm³, which was manufactured in Pinneberg.

In mid-1954, around 1,500 people worked in both plants and produced around 184,000 engines. This made ILO not only the largest employer in the Pinneberg district , but also the largest manufacturer of two-stroke engines in Germany. Furthermore, the unicycle wagon gate valve, which was developed and improved even before the war, was built.

But the boom for motorized two-wheelers ended in the mid-1950s. Numerous motorcycle manufacturers filed for bankruptcy because the car became the favorite of the Germans. The production of motorcycle and scooter engines ended around 1959. The company had to lay off around 600 employees.

At the end of 1959 a buyer was found in the Rockwell Manufacturing Company . Christiansen jun. remained in the company as managing director until 1960 . A new production hall for fittings was built. The business with neglected industrial engines developed positively and the number of employees rose again to 1200. From 1963 the production halls were no longer sufficient and the valve manufacturing was relocated to Prisdorf .

Around 1960, the development of snow sled motors for the North American and Scandinavian market began, as the snow sled had become a piece of sports equipment in the USA and Canada . From 1963 the company invested in snow sled motors. A wide range of engines was soon available and success was inevitable. ILO engines were also installed in go-karts that were used at public festivals.

In the mid-1960s, new sales and production records came for ILO. Sales of snowmobile motors to the USA and Canada rose to over 39,000 units, which represented about half of the total ILO exports . From 1965, sales increased in larger numbers. By the end of 1969, ILO had produced around 283,000 engines. In 1968 a new die-casting foundry was finally built. This increased the production area to over 20,000 m². The investment reached record levels in 1969, they amounted to 10 million DM. But the renovation and expansion of the social rooms cost 500,000 DM and the construction of a fully automated high-bay warehouse cost 1.5 million DM. It was planned sales to more than 100 million To increase DM.

In 1971, however, sales of snowmobile motors fell drastically because the Japanese competition had become too big. As almost everywhere, they bothered German and European manufacturers with good quality and inexpensive products. In addition, overcapacities in engine production led to a drop in prices worldwide. The appreciation of the DM made foreign business difficult. In 1969 ILO delivered 283,000 engines. A year later there were only 128,300. The sale of industrial engines had continued in parallel during the years of the snow sled boom. But there were no new products, because the focus was too much on the snow sled motors. Years of short-time work and downsizing followed. The number of employees fell to 800. In mid-1975, the ILO ceased production of snowmobile motors. The die-casting foundry was closed in early 1976. At that time, 320 employees were still working in the large halls.

In 1977 the company was sold to the American Tecumseh Products Company . The new company built compressors , transmissions and, as in the past, two- and four-stroke engines . The acquisition of the ILO plant was intended to provide a "pillar" on the European market and strengthen the position as an engine supplier. A spare parts warehouse was set up to supply the European Tecumseh engine customers. ILO now built all-purpose engines for agriculture , construction and industry . ILO engines now ran in sweepers , lawn mowers , compressors and earth compactors . Now further technical improvements to the engine range have been worked on. A slight increase in engine sales is also achieved again. The contract manufacturing and delivery of crankshafts for other manufacturers brought hardly any profits. Empty halls were rented to Toyota Germany, which operated a central spare parts warehouse there , and they were in the black.

ILO engine collection from the city museum in Uetersen

In 1986 ILO celebrated its 75th company anniversary. In front of employees and guests of honor, the management was optimistic that the order situation could be improved in the following years. But in 1988 all employees realized that it wasn't. After several important customers went bankrupt, sales fell to 6 million DM by 1989. A newly developed lawnmower motor had to be taken off the market due to technical problems. Since 1987 the company has been making losses. In mid-1990, Tecumseh decided to close the plant in Pinneberg because there was overcapacity in engine production worldwide. The remaining 186 employees received severance pay according to a social plan . The entitlement to a company pension was also secured.

On December 31, 1990, the factory gates closed forever. On March 13, 1991, the machine park, the factory equipment and large parts of the factory museum of the ILO plants were auctioned . This is how an eighty-year company history came to an end.

Part of the engine collection came to the Pinneberg City Museum and the Uetersen City History Museum in Uetersen . The Pinneberg Mobil has been held every May since 1999 . It is a veterans' meeting with a trip through the Pinneberg district for automobiles , motorcycles and tractors in memory of the ILO works, with meetings of former ILO employees.

In the “good” times, the ILO plant was still concerned with promoting the mechanical engineering trade. Guided tours were often carried out for interested school classes. A relic of this collaboration is part of a large, ton-heavy, decommissioned ILO production line that is still in the main entrance of the vocational schools in the Pinneberg district in Pinneberg.