The small computers of the series KC 85 / 2-4 were from 1984 in the GDR by the state- owned company VEB Mikroelektronik "Wilhelm Pieck" Mühlhausen from the Kombinat Mikroelektronik Erfurt in the models HC 900, KC 85/2, KC 85/3 and KC 85 / 4 built. The manufacturer initially thought of the hobby and private sector, but most of the computers for popular education were complained about . Until shortly before the end of the GDR (around 1988), these computers were difficult to obtain for private individuals. The high price (3,900 M for the KC 85/3 - later reduced to 1,750 M, 4,600 M for the KC 85/4 - later reduced to 2,150 M) ensured that the "small computers" hardly found their way into private households.

The 1985 renaming from Z 9001 to KC 85/1 and from HC 900 to KC 85/2 was due to the change in the application, because the KCs should not be used as home computers, but as small computers in schools and other training facilities.

The system architecture of the HC 900 was anything but perfect: The screen control implemented with counter circuits was laborious to program. Essential system functions were implemented with PIOs (e.g. bank switching) and CTCs (cassette interface, flashing, sound output). The sound was generated by two CTC channels with a downstream flip-flop . Extras such as blitters or sprites were completely missing. The operating system CAOS (Cassette Aided Operating System) and HC-BASIC were quite comfortable, but slowly. With the original Mühlhausen operating system, scrolling the screen took 0.6 seconds and clearing the screen took 1.75 seconds. This improved significantly with the KC 85/4. The KC 85 / 2-4 implemented some standard interfaces such as Centronics for parallel printers, and serial interfaces (such as RS232C or V.24 ) via additional modules . From 1989 there were floppy disc drives as an additional device for the series, which represented its own CP / M computer and used the basic device as a terminal .

It was based on the 8-bit CPU U880 (a Zilog Z80 - Clone ) 1.75 MHz (HC 900 = KC 85/2, 85/3 KC) or 1.7734475 MHz (KC 85/4) processor clock. The typical application of the Mühlhausen computers was a KC 85/3 with 32 KByte RAM (expandable with additional modules ), 16 KByte ROM - BASIC , connected cassette recorder for data storage and connection to a television used as a monitor (via UHF modulator, FBAS output or RGB output). The KC 85/2, it only had 4 KByte ROM, lacked the ROM-BASIC and the lower case letters. The KC 85/4 came with 128 KB of RAM and improved graphics options, but these were hardly used due to the collapse of the GDR . All KC 85s from Mühlhausen were graphics capable; the screen resolution was 320 × 256 pixels. However, the “color resolution” was significantly lower: In a pixel rectangle of 4 × 8 pixels, there could only be one foreground color (out of 16 possible) and one background color (out of 8 possible). With the KC 85/4, this restriction was reduced to a line of 1 × 8 pixels, and a “real” color mode with 4 colors and no limitation could also be switched on. It was not until the KC 85/4 that the disruptive characteristic of the Mühlhäuser KC series that memory accesses by the CPU to the screen memory caused picture interference.

At the University of Leipzig , visiting students gain their first experience at KC 85/3 (1989)

The main extensions of the KC 85/4 were:

The biggest change was the expansion (with an organization incompatible with the KC 85/2 and KC 85/3) of the screen memory:

By reading from port xx80, the module identifier called "structure byte" was obtained:

This made it possible to achieve a certain degree of plug and play .

Modules could be activated and configured by writing to this address:

The Junost-402B black and white television set was often used as a monitor. The device only had one antenna input. The image quality was very mediocre, letters were provided with disturbing ghost images. The HF output provided no sound and no sound carrier; the volume control on the television had to be turned all the way to the left in order to suppress the loud noise.

Additional signals were available via a connector on the rear:

They allowed the connection of televisions with composite input (which enabled medium quality) or with RGB input. Since most televisions did not have such inputs, you had to

KC85 / 3 with documentation, software cassettes and peripheral devices, etc. a. the GC6020 as mass storage

Although the recording frequencies of 600 Hz to 2,400 Hz were quite low (the signal can be transmitted by phone), the azimuth adjustment of different devices was often quite different. Another problem was the drop-out rate of cartridges from the VEB ORWO Wolfen .

There have been a few approaches to speed this up:

The first software library was opened in Dresden in 1989

The KC 85 / 2-4 could be programmed in machine language and (before the KC 85/3 only with an additional module or RAM-BASIC from cassette) also with a BASIC dialect, which was significantly more extensive than the BASIC in the C64 . In contrast to most home computers , the system always started with the CAOS operating system (rather a better monitor ); BASIC had to be called explicitly from this monitor, if it was in the ROM at all. The monitor commands could easily be extended by assembler programmers.

Other, but not widely used, programming languages ​​for small computers were Pascal and Forth . In the last years of the GDR a floppy disk attachment was built for these computers. This enabled CP / M (Mühlhausen's name for it: “MicroDOS”) and software to be used.

The BASICODE programming language was also available for the KC 85 / 2-4 . It is a BASIC dialect that is compatible with a number of computers, with programs for BASICODE also being broadcast on the radio.

There were essentially two categories of games: 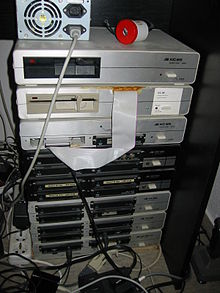 Popular self-construction projects were / are:

The CAOS operating system is subject to regular further development. There are also newly developed versions for the CP / M supplied with the floppy disk extension. A graphical user interface is being worked on. There were also model tests to implement industrial control tasks ( programmable logic controllers , PLC) for teaching purposes with the small computers. At the Breakpoint 2009 the KC 85/4 was used for a demo .

At the time of manufacture, the circuit board of the KC 85/4 was already prepared for the use of more powerful memory types. The use of these memories was no longer implemented by the manufacturer until the series was discontinued. The built-in 64Kbit DRAMs can easily be exchanged for 256Kbit types. The CAOS and BASIC ROMs can also be replaced by larger types with further developed program versions without the need for further changes to the original hardware. A KC 85/4 upgraded in this way is commonly referred to as a KC 85/5.

More small computers from the GDR