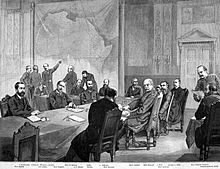 Contemporary engraving of the conference participants

The Congo Conference (or West Africa Conference ) took place from November 15, 1884 to February 26, 1885 at the invitation of the German Chancellor Bismarck in Berlin and was intended to regulate the freedom of trade in the Congo and Niger . It is also known as the Berlin Conference (but not to be confused with the Berlin Congress in 1878). Its final document, the Congo Act , formed the basis for the division of Africa into colonies in the subsequent race for Africa . 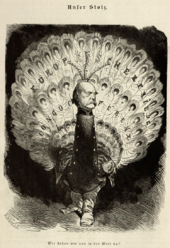 Caricature about Otto von Bismarck on the occasion of the Congo Conference in Kladderadatsch , 1884

Since the discovery of the sea ​​route to India at the end of the 15th century, initially Portugal and Spain , later also France and England , at times even Brandenburg , Denmark , Courland and Sweden had taken possession of bases on the coasts of Africa and on offshore islands. These were mainly used for trade, initially with spices and slaves , but also with ivory , tropical wood and other African products. No forays into the interior of Africa were undertaken; in the minds of Europeans, Africa remained the “dark continent”.

The tropical areas of Africa were less interesting for Europe, as slavery, not least because of the growing influence of the emerging abolition movement and the English prohibition of the slave trade of 1806/1807 ( Slave Trade Act ), which prohibited the trade in slaves, considered slavery but left the right in rem in a person unaffected, had become unattractive. The ban on the slave trade triggered numerous dynamics that led to far-reaching, highly contradicting changes on the African continent. Because of the increasing industrialization of the colonial powers , the demand for vegetable fats such as peanut kernels and palm oil for soap production increased , which led to an increase in slave labor due to the labor-intensive extraction (massive expansion of collecting activities, long transport routes, labor-intensive production of oils from fruit pulp and kernels). The decline in the transatlantic slave trade in the 19th century initially meant in (West) Africa that the labor of dependents and slaves increased.

After losing the American colonies , the British began to look for other new areas besides Australia . In 1795, Mungo Park was the first of a growing number of European Africa explorers who explored the interior of the continent in the course of the 19th century . Most researchers had scientific goals, later these were linked to the economic and political interests of their clients.

The first attempts at colonization began in the temperate areas in the south and north. In Cape had settled since 1652 Dutch settlers who after the occupation of the country by the United Kingdom (1806, 1815 finally British) dodged inland ( great trek 1835). In the north, France occupied Algeria in 1830 and largely controlled the country by 1857, turning it into a settlement colony for Europeans.

In Liberia a settlement colony of released American slaves was established in 1822 , which was constituted as a state in 1847. The Boer states Natalia , Transvaal and Orange Free State were founded in South Africa in 1843, 1852 and 1854 . In the interior of Africa numerous new empires were formed under European influence, which in West Africa were mostly ruled by Islamic dynasties. The Suez Canal was built from 1859 to 1869, bringing East Africa closer to Europe.

Prehistory of the conference

In the early 1880s, European interest in Africa increased sharply. With his exploration of the Congo Basin from 1874 to 1877, Henry Morton Stanley removed the last large "white spot" from the map of Africa. In 1878 he received an invitation from Leopold II , King of the Belgians, who had founded the International Africa Society ( French Association Internationale Africaine, AIA ) in 1876 with the aim of exploring and “civilizing” Africa. In 1879 the International Congo Society was founded with the aim of pursuing economic goals, but with which AIA was closely linked. Leopold secretly bought up the foreign shares of the Congo society , the philanthropic African society mainly served to conceal the imperialist goals of the Congo society .

From 1879 to 1884 Stanley traveled again to the Congo, this time not as a reporter, but as Leopold's envoy with the secret task of organizing the Congo state . At the same time, the French naval officer Pierre Savorgnan de Brazza traveled in the western Congo Basin and hoisted the French flag in the newly founded Brazzaville in 1881. Portugal, which also derived claims to the area from old treaties with the native Congo Empire, signed a treaty with Great Britain on February 26, 1884, which provided that the Congo society should not have access to the Atlantic.

At the same time, several European countries advanced into Africa and the “ race for Africa ” began: France occupied Tunisia in 1881 and what is now the Republic of the Congo, and in 1884 Guinea . Great Britain occupied the nominally Ottoman Egypt in 1882 , which in turn ruled over Sudan and parts of Somalia . Italy took possession of the first parts of Eritrea in 1870 and 1882 . In 1884 Germany placed the coasts of Togo and Cameroon as well as the Lüderitzland , later called German South West Africa , under its " protection ".

Leopold II of Belgium managed to convince France and the German Reich that joint action in Africa was in their interests. Otto von Bismarck , the German Chancellor, invited the representatives of the USA , the Ottoman Empire and the European powers Austria-Hungary , Belgium , Denmark , France , Great Britain , Italy , the Netherlands , Portugal , Russia , Spain and Sweden - Norway (until 1905 personal union ) to a conference in Berlin.

The conference met on November 15, 1884 in the Reich Chancellor's Palace on Wilhelmstrasse . Stanley participated as a technical advisor to the US delegation but had little influence. The conference ended on February 26, 1885 with the signing of the Congo Act . However, the USA did not ratify the treaty afterwards for domestic political reasons.

King Leopold II achieved a great triumph because he actually got his private state: With the Congo, the most resource-rich area in Africa had not passed into the possession of a great power, but to Belgium, which was of little importance for European continental policy. In addition, the interests of Great Britain and France in terms of colonial policy had turned out to be incompatible. Bismarck had once again proven himself to be an “honest broker”; his interest in colonial politics remained dominated by domestic and European considerations. 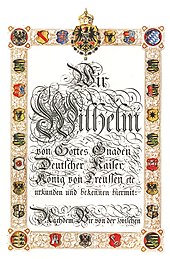 Title page of the German instrument of ratification for the final act of the Congo Conference of April 8, 1885 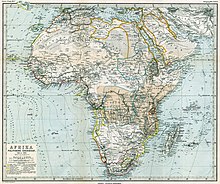 The Congo Act regulated the following points in 38 articles: 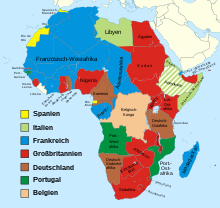 The race for Africa accelerated. Within a few years, sub-Saharan Africa was at least nominally divided, until 1895, apart from Abyssinia ( Ethiopia ), only the colonies of Liberia , Orange Free State and Transvaal were independent. Most of the Sahara became French, Sudan became a British-Egyptian condominium after the suppression of the Mahdi uprising and the settlement of the Faschoda crisis .

The Boer states were conquered by Great Britain during the Boer War between 1899 and 1902 . In 1911, France and Spain split up Morocco . Libya was conquered by Italy in 1912. The official declaration of Egypt in 1914 to the British protectorate concluded the colonial division of Africa.