Crimean shield in the style of a foundation

The Krimschild was a combat badge of the German Wehrmacht in the form of a sleeve shield , which was awarded during the Second World War .

Background to the creation of this award

The southern army group captured from autumn 1941 to summer 1942, the peninsula of Crimea . After the fighting ended, on July 25, 1942, the Crimean Shield was donated by Adolf Hitler to commemorate the fighting in the 11th Army under Field Marshal General Erich von Manstein .

Ordinance on the Foundation of the Crimean Shield of July 25, 1942

The Crimean shield could be awarded to all members of the Wehrmacht and persons subordinate to the Wehrmacht who participated in the fighting for the Crimea from September 21, 1941 to July 4, 1942. H. south of the Isthmus of Perekop , on land, in the air and on water, had "honored" participated and met one of the following conditions:

The map of the Crimean peninsula shown shows the battles mentioned in the Foundation Ordinance as well as the general award limit of the Crimean shield at the top of the picture. The award proposals for the Crimean Shield had to be submitted to the Army High Command by March 31, 1943 , and these had to be completed by October 1, 1943. The Crimean shield was also given to soldiers in the Romanian armed forces.

Crimean shield of the 57 version with 16 mm pin

The award took place “in the name of the Führer”, Field Marshal von Manstein. The entrusted also received a certificate of ownership. The sleeve shield could also be awarded posthumously . In this case, the Krimschild with the award certificate was sent to the bereaved. 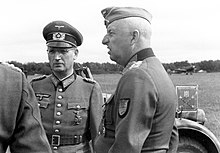 The Crimean shield, like all armored shields of the Wehrmacht, was worn with the uniform on the left upper arm. It could also be worn with all party and state uniforms. A reduced form (16 mm needle) of the Crimean shield on the left cloak of the skirt was allowed to be worn with bourgeois clothing. Soldiers with several arm shields ( Narvik shield , Cholm shield ) and the Krim shield mentioned here wore the first shield approx. 7 cm from the armhole seam of the left upper sleeve of the field blouse and coat. The second shield was placed 0.5 cm below the cloth pad of the first shield. Holders of three shields wore the Cholm and Krim shield side by side , 0.5 cm below the cloth underlay of the Narvik shield, namely the Cholm in front of the Crimean shield.

The exact number of awards, including those to Romanians, is no longer known as the documents are considered lost. It is believed that between 200,000 and 300,000 sleeve shields were issued. Including two gold-plated sleeve shields for:

The Crimean shield itself was mostly punched from simple sheet iron, later also made from fine zinc. The shield has a rounded shape and an imperial eagle is depicted on its upper edge . Under the wings of the eagle the year 1941 can be seen on the left and the year 1942 on the right . The main part of the shield is the raised, stamped geographical representation of the Crimea together with its northern foothills (today's names: Kherson and Zaporizhia ). In the relief of the Crimea, the word KRIM is stamped in capital letters running diagonally to the lower right.

According to the law on titles, medals and decorations of July 26, 1957, wearing the award in the Federal Republic of Germany is only permitted without National Socialist emblems.

Orders, decorations, awards for work and merit of the Wehrmacht and Waffen SS