The former Kynast winery with vineyard property, manor house and park as well as formerly the "Gartenpresse" is located on Zitzschewiger Flur in Radebeul , Saxony , in Kynastweg 26. The top of the Kynast lies at a height of 202.6  m above sea level. NN . The vineyard, whose name goes back to a Dresden council family, was first mentioned in a document in 1407. The Chojnik is located in the conservation area Historic vineyard landscape Radebeul , apply the open spaces of the five-hectare estate as a work of landscape and garden design .

Chestnut natural monument at the Kynast house, on the left an outer wall of the Talutanlage on the Krapenberg

The vineyards of the Krapenburg are immediately below the green spaces of the Kynast . To the northwest follow the Baurick house in the historic vineyard landscape and the areas of the former Paulsberg winery, which are also protected as a work of landscaping and gardening . 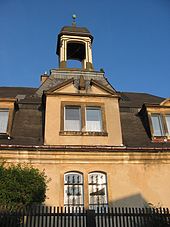 The property consists of various buildings that are now a listed building. Mention should be made of the manor house, tower house, gardener's house, gatehouse, baroque fountain or bath house, the portal system of the property entrance, park with water basin and sundial, terraced retaining walls of the associated vineyard, a grotto and water technology systems in the north. The monument protection has existed since GDR times , but the mansion and the tower house were listed in Gurlitt's art monuments from Dresden's surroundings as early as 1904 .

The massive mansion ( Haus Kynast ) built in 1746 was originally a five to five window axis building with two storeys and a large wine cellar, to which a single storey commercial building was attached. In 1888, following a building application from Clementine Roßberg, the Kötzschenbroda master builder, F. A. Bernhard Große, added a floor, so that the mansion now has a length of 10 axes, some of which are shown as blind windows. On top there is a high hipped roof with gable dormers . On the courtyard side there is a single-storey entrance porch, solid since 1935, originally made of wood. The plain stucco building, which set back gable constantly standing on the street, wearing numerous wine trellises, the windows are by robe edged sandstone and the courtyard by shutters. Around 1900 the interior of the manor house was redesigned in the old German style. Before the mansion stands on a Sandsteinpostament a sundial from the 18th century.

The tower house, built after 1750 as a summer house and garden house, stands at the eaves on the street. It has a length of three window axes, is two-story and has a mansard roof . In the middle of this stands the eponymous tower with an open lantern and curved hood with a point and pommel , which was added around 1800 for the postmaster Blüher . Under the tower facing the street there is a dwelling in the roof with a blown triangular gable, on both sides of which gables with coupling windows. The plastered building, presumably rebuilt around 1899 by the master builder Bernhard Große for the owner Heino Kretzschmar, also has sandstone walls around the windows, which are arched on the ground floor. Gurlitt describes the roof turret as "a pretty roof turret in the shape of around 1760", while Donath "recognizes echoes of the plait style , which suggests a date in the early 19th century." The early 19th century fits our current classification of Blühers , while the plait style (1760–1790) still refers to the end of the 18th century.

The gardener's house with wine cellar, built in 1845 instead of a stable, is attached to the tower house. It is five to two window axes, has two floors and a gable roof . The plastered building is structured by cornices and jointed corner pilasters.

This is followed by the single-storey gatehouse built in the first half of the 19th century. The building is made of half-timbering , it bends at an obtuse angle from the line and has a passage to the Kynastweg; There is a triangular gable above the passage.

The bath house, built around 1750, is a small, plastered quarry stone building with a mansard roof next to the rear of the main house. It served to collect the water brought in by means of a water pipe.

Entrance portal to the Kynast

In the upper part of the property, part of the vineyard terrace was rebuilt in the 1990s , the rest is still forested. Up there is a shell-shaped grotto that was created around 1750. It is a half-dome made of rubble stones, the interior of which is smoothly plastered. In the lower part of the manor house, in the park-like garden with stately chestnut trees , there is a semicircular sandstone pool.

The portal system of the property entrance consists of two sandstone pillars with a two-part, wrought-iron grille.

House Kynast. Architectural drawing in 1888 by F. A. Bernhard Große on the occasion of the extension of the single-storey extension

The once schriftsässige vineyard property Kynast , whose name goes back to a Council Dresdner gender, was in 1407 mentioned for the first time, the time of Dresdner councilman and mayor Mertin Kynast . In the hereditary interest register from 1547, the entry reads on "the cynast in the high mountains in the Zitzschewig corridor on which there is a press house". The owner at the time was Jacob Knebel zu Budissin . Knebel sold the vineyard along with the "garden press" to the Council of Budissin, who left it to the city judge Hieronymus Bergkmann and the treasurer Adam Ruprecht as a fief until a buyer was found. This found himself in 1578 with the Dresden magistrate Andreas Kynast, another member of the Kynast family.

As a result, the widow of Oberwachtmeister Gabriel Hölzmüller zu Wittenberg received ownership in 1638. A little later, she sold the vineyard, which was only fenced in with a fence, for 300 thalers to the secret chamber secretary and later councilor and councilor Gabriel Voigt, who had a simple building built in 1674 on the site of today's manor house. In 1687 his daughters sold the property for 3000 guilders (2/3 of a thaler) to Anna Rosine Vollbrecht. In addition to the vineyard, the property now included half a hoof of land and residential and other buildings with inventory and cattle, as well as a fish rights share in the pool .

In the same year Christiane Eleonore geb. Bose as heir to the will of the Cynast, who was married to Colonel Philipp Wilhelm von Bomsdorff. Between 1687 and 1821 (or at least until 1782) the winery belonged to the von Bomsdorff family , who created the current baroque winery complex. She expanded the property and built the manor house with a high hipped roof in the simple Baroque style over a large wine cellar. The half-timbered winegrower's house with barn was built around 1700. The tower house that dominates the complex today was built in the late 18th century, initially without a tower.

In the early 19th century, the winery was a meeting place for the Dresdner Liederkreis , to which Carl Maria von Weber belonged.

At the beginning of the 19th century, the tower house received the oversized roof turret from its owner, postmaster August Blüher from Tharandt .

The writer August von Witzleben was one of the other owners of that time between 1831 and 1839 .

In 1845, the gardener's house with wine cellar was built in place of a stable. Around 1850 the "lovely vineyard villa Kynast [...] with a splendid tower building" belonged to a Wilhelm Kämpffe.

After the kynast became ownerless , the Saxon state took it over.

In 1920 the cynast belonged to the widow general Else von Horn.

From 1921 (1920) the Secret Bergrat Ewald Hilger was owned by Kynast. An iron “greeting card” from 1934 for his 75th birthday, which the Gutehoffnungshütte sent to him, commemorates him . Hilger bequeathed the property to his daughter, who in turn bequeathed it to her daughter. Even when she and her children moved to West Germany in 1957 for personal reasons, the cynasty was not expropriated.

During the GDR era, the LDPD state party school was located in the manor house . The residents of the property included the politician and publicist Hans Marschall and his wife, the poet Maria Marschall-Solbrig .

In 1990 Hilger's great-grandchildren got the family property back. The manor house and the gardener's house have been renovated since the 1990s; the manor house has been inhabited again by Hilger's descendants since 2004.

The associated vineyards are now leased to the Schloss Wackerbarth state winery .