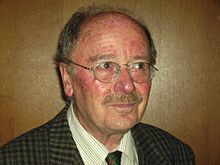 After an apprenticeship as a carpenter and a sculptor, he studied from 1951 to 1957 at the Academy of Fine Arts in Munich as a student in the sculpture class of Toni Stadler , who was considered an important representative of the “Munich archaic”. In 1957 he moved into a studio in Munich, from which he returned to St. Wendel in 1960. In 1978 he received a professorship at the chair for sculpture in connection with architecture at the Academy of Fine Arts in Munich, where he was also vice-rector from 1991 to 1993. He retired in the late 1990s. Leo Kornbrust was a member of the German Association of Artists .

Kornbrust was married to the Saarland writer and poet Felicitas Frischmuth , who died in 2009 at the age of 78 . He lived and worked in his house on the Damra , a natural and cultural landscape near St. Wendel . He died on July 20, 2021 at the age of 91 in his hometown of St. Wendel.

"Polygonal body" made of Krastal marble , set up in Europapark Klagenfurt , Carinthia, Austria

Stele with texts by Felicitas Frischmuth in front of the Saarland Museum, Saarbrücken

Basalt stele in the fountain system of the UKV building (Saarbrücken)

The starting point for his sculpture was the human figure in the early days of Munich. During his student days he modeled female nudes and human heads that were subject to the artistic influence of his teacher. After a phase of exclusively modeling with clay and other materials, Kornbrust turned to working with stones in the early 1960s. This was accompanied by his shift from previously vegetative forms to an abstract language of forms, to concrete, constructive elements that became more and more stringent in his artistic development phases. His preferred materials were basalt lava and dark granite .

Numerous sculptures by Kornbrust are in public space . Renowned commercial enterprises commissioned the artist to design the artistic environment for their administrative buildings. His sculpture "Hohes Siebeneck", completed in 1995 and a large sculpture on the building of Union Krankenversicherung AG (UKV) in Saarbrücken, can serve as an exemplary example .

In 1974 Kornbrust shot an episode of the television documentary series "Topography" for Südwest 3 together with his wife . The film with the title "Topography V - St. Wendel, Names and Faces 1974" (camera and director: Ohm Wegener) shows the development of his hometown under the then mayor Jakob Feller  and his predecessor Franz Gräff .

Street of the Sculptures

In the early 1970s, the artist and his wife created a series of so-called "font sculptures". Kornbrust incorporated texts from his wife into obelisk-like and cube sculptures with the help of a sandblast or a Vidia stylus. Probably the most important example from this phase of work, an approximately six meter high column made of polished granite, is placed in front of the building of the Modern Gallery in Saarbrücken.

From 1967 to 1970 Kornbrust was invited to take part in the symposium of European sculptors in St. Margarethen in Burgenland . There he got to know the sculptor colleague Karl Prantl and his idea of sculpture streets. In 1971, Kornbrust himself initiated the "International Stone Sculpture Symposium St. Wendel", which is now known throughout Europe, in the course of which numerous large-scale sculptures by international artists were created. In 1979 these and other new large sculptures were arranged in the natural environment of the "Damra" to form a " street of sculptures ", the Kornbrust as a homage to the artist Otto Freundlich , who he admired, and his pacifist idea of ​​a " street of peace ", a European sculpture street from Paris to Moscow, wanted to know. In 2002 the Street of Sculptures (St. Wendel) was connected to a similar Saarland project by the sculptor Paul Schneider , “ Stones on the Border ”; At the interface between the communities of Gehweiler (near Wadern ) and Oberlöstern, a sculpture by the two initiators Leo Kornbrust and Paul Schneider was placed as a visible sign of the connection.