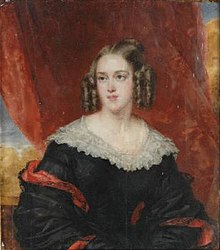 Louise Marie Thérèse d'Artois , royal princess of France (born September 21, 1819 in Paris , L'Élysée-Bourbon ; baptized December 16, 1819 in the chapel of the Tuileries Palace , † February 1, 1864 in Venice ), was one Princess of the Bourbon family , by marriage Duchess of Parma and subsequently regent of the Duchy of Parma .

Princess Louise was the only surviving daughter of Charles Ferdinand de Bourbon , Duke of Berry (1778-1820) and his wife Princess Maria Karolina of Naples-Sicily (1798-1870), daughter of King Francis I and his first wife Archduchess Maria Klementine of Austria . In February 1820 her father was fatally wounded by the former royal saddler and Bourbon hater, Louis-Pierre Louvel , in the face of hundreds of eyewitnesses on the stairs of what was then the Paris Opera (Salle Montansier, rue de la Loi, today Square Louvois) . Louise's mother gave birth to her son Henri d'Artois (1820–1883) seven months after her husband was murdered .

After the July Revolution of 1830 , Duchess Marie Caroline fled to Scotland with the royal family and their two children . In 1832 she returned to Paris to regain the crown for her son. The enterprise failed and the Duchess of Berry was arrested in Blaye near Bordeaux . After her secret marriage on December 14, 1831 in Rome to the unequal Count Ettore Lucchesi Palli , Duke della Grazia (1806-1864), she was released in June 1833 because she was no longer dangerous to the French government could. In the same year she was accepted into Austria with her second husband.

Separation from mother and marriage

Charles X of France refused his former daughter-in-the publication of her two children, as they claim to his only grandson Henri as a pretender to the throne stood in the way and he had not asked for permission to marry. The upbringing of Louise and Henri was instead taken over by their childless aunt, Duchess Marie Thérèse von Angoulême , who established a close relationship of trust with the two children.

Charles X died in exile in Gorizia in 1836 and the Duke of Angoulême now took up his seat there with his wife and his brother's children. After his death in 1844, Duchess Marie Thérèse acquired Schloss Frohsdorf as a residence, where the wedding of the 26-year-old Princess Louise with the Hereditary Duke of Parma, Ferdinand Karl (1823-1854), took place.

On March 14, 1849, Duke Charles II of Parma resigned the government in favor of his only son after the revolutionary uprisings. In August 1849 Louise moved with her husband Charles III. under the protection of Austrian troops in Parma , where the duke set up an arbitrary reactionary regime. All participants in the uprising were punished. The insurgents were executed after a brief trial and others were whipped. The country received strict police control and permanent Austrian occupation. This made the duke so hated that he was assassinated in Parma in March 1854. He died on March 27 from injuries from dagger stabs inflicted on him by a stranger on the street the previous day. After her father, Louise lost her husband in an assassination attempt.

Regent of the Duchy of Parma

Louise took over the government for the still minor heir to the throne, Louise's eldest son, who was proclaimed the new Duke Robert I in 1854 . In the spring of 1857 the Austrians left the duchy, only Piacenza remained under their contract. When the Italian movement broke out in 1859, the people of Parma demanded the connection to Sardinia-Piedmont . When, on April 30, the officers of Parma's troops themselves asked the regent to openly do common cause with Victor Emmanuel , in order to be able to maintain her neutrality, she and her son left the country and went to Mantua . She had scarcely left when most of the troops and almost the entire population declared themselves in favor of immediate union with Sardinia-Piedmont. Only a small part of the Parmesan troop corps was in favor of maintaining independence and called the Duchess back on May 4, 1859. The same responded immediately to the request and had the National Guard disarmed, but otherwise strictly tried to maintain its neutrality. However, part of the duchy revolted and was occupied by General Ribotti in the name of Victor Emmanuel II . The Duchess's children were brought to Switzerland on May 27th, and when the Austrians made arrangements to evacuate Piacenza after the Battle of Magenta , the regent released her troops from the oath of allegiance on June 9th and traveled to Switzerland on the same day Switzerland. The revolutionary authority established in the city of Parma on June 8th thereupon elected a provisional government of three members, and this now asked Victor Emanuel to take over the government of the duchy. The governor appointed by the Sardinian government arrived on June 16.

On September 15, 1859, the Bourbon dynasty was officially deposed in Parma . By decree of March 18, 1860, after a general referendum on the unification of Parma with Sardinia-Piedmont, Parmas joined the Kingdom of Sardinia .

Duchess Louise died in Venice on February 1, 1864 at the age of 44. She was buried in the Kostanjevica Monastery in Gorizia, Slovenia, at the time, the burial place of the exiled French Bourbons since the July Revolution of 1830 .

On November 10, 1845, Princess Louise Marie Therese married the future Duke Karl III at Schloss Frohsdorf in Austria . von Parma (1823–1854), son of Duke Charles II of Parma and his wife Princess Maria Theresa of Sardinia . After the marriage they lived in London. The marriage had four children:

⚭ 1867 Infant Charles of Spain from the House of Bourbon, Duke of Madrid