Maria Helena Kaczyńska (born August 21, 1942 in Machowo , now Belarus , as Maria Helena Mackiewicz ; † April 10, 2010 in Smolensk , Russia ) was the wife of the Polish President Lech Kaczyński and thus the "first lady" from 2005 until her death “( Polish Pierwsza Dama ) of the country.

Maria Kaczyńska was born Maria Mackiewicz in 1942 (according to other sources, 1943) . Her father Czesław Mackiewicz worked as a forester in Nowa Brda and made her familiar with nature. Her mother Lidia came from Saint Petersburg and was a teacher at a school near Złotów . She had a brother named Konrad. Her family originally came from the Vilna region . They returned to Poland as repatriates after the Second World War . As a member of the Polish Home Army, her father fought against German Wehrmacht soldiers in the Lithuanian city . Two of her paternal uncles were also involved in the war: one took part in the Battle of Monte Cassino (1944) as a member of the 2nd Polish Corps , the other was killed as an officer in the Katyn massacre (1940).

After the war, the family tried to find a new place in Poland and moved to Bydgoszcz and later to Człuchów . Maria Mackiewicz was born with a heart defect and her parents took special care of her. After a spa stay in Rabka-Zdrój , during which Mackiewicz's health improved, the family moved there and her mother found a job as a counselor in a children's sanatorium. She then attended elementary and high school in Rabka-Zdrój, where she began to be interested in languages. At the age of eleven she had a heart operation in Warsaw. Later she moved to the business school in Sopot , where she studied from 1961 at the Department of Sea Transport. After completing her studies in 1966, she worked at the Sea Institute in Gdansk . As part of her doctorate , she dealt with the topic of freight transport markets in the Far East.

Maria Kaczyńska together with her husband

In January 1976 Maria Mackiewicz met her future husband Lech Kaczyński , who at that time was working as a research assistant in the law department at the University of Gdansk . A friend asked her to find him an apartment in Sopot. Both married in 1978. From 1981 Kaczyński was one of the intellectual advisors of the Solidarność trade union movement in the Gdańsk Lenin Shipyard and was later interned. At that time, Maria Kaczyńska was on parental leave and should not return to her old job at the Seeinstitut. She dedicated herself to family life, supported her husband's political ambitions and also worked as a freelance translator for the languages ​​English and French. However, she herself had no ambitions to seek political office.

Kaczyńska's husband rose from being a Polish senator in the early 1990s to becoming mayor of Warsaw in 2002. Together with his twin brother Jarosław Kaczyński, he founded the national-conservative Law and Justice party (in Polish: Prawo i Sprawiedliwość ). 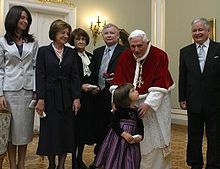 Pope Benedict XVI with Maria Kaczyńska and her family (2006)

In 2005, Kaczyński prevailed against Donald Tusk in the Polish presidential elections and became the country's president. Maria Kaczyńska accompanied her husband to representative appearances and got involved in various charitable and cultural initiatives, often for disabled people and especially children, as well as breast cancer screening for women. After the foundation of her predecessor hit the headlines in connection with a political affair, Kaczyńska refused to set up her own foundation. Among other things, she opened Polish cultural centers in Tel Aviv and Saint Petersburg and posthumously honored the Polish resistance fighter Irena Sendler on a visit to the United States .

Kaczyńska was very popular in Poland as the wife of the president. Although she was considered cautious in public, she distinguished herself through liberal positions and she was said to have a talent for balancing opposites. "She was very sensitive and had a great influence on her husband," said former Prime Minister Tadeusz Mazowiecki . Kaczyńska sympathized with environmentalists and spoke out in public for artificial insemination . In 2007 she and 50 other politically active women appealed to the Polish parliamentarians not to tighten the abortion law in Poland. People around Tadeusz Rydzyk then publicly referred to her as a "traitor".

The daughter Marta, born in 1980, came from his marriage to Lech Kaczyński. Maria Kaczyńska was considered to be fond of animals and owned two dogs and two cats in her apartment in the Polish presidential palace . Her other interests included music, ballet and theater. In addition to English and French, she also had language skills in Spanish and Russian. According to her own statements, Kaczyńska admired Margaret Thatcher , Hillary Clinton and Madeleine Albright , who worked with her for women's cancer prevention.

As it became known only after her death, Maria Kaczyńska kept a diary since the presidential election of her husband. Despite being offered large sums of money, her daughter Marta refused to publish the memoir.

Sarcophagus of Maria Kaczyńska and Lech Kaczyński in the Wawel Cathedral

Maria Kaczyńska made her last public appearance on April 9, 2010, when she received Polish families from Russia , Kazakhstan , Belarus and Ukraine in the Presidential Palace. A day later, Kaczyńska and her husband belonged to a Polish delegation that was to travel to the memorial in Russia on the occasion of the 70th anniversary of the Katyn massacre . In a plane crash near the Smolensk-Nord military airfield , the couple and other high-ranking representatives of Poland were killed.

Three days after the accident, Kaczyńska's body was transferred to Warsaw and publicly laid out in the presidential palace by her husband's side. On April 18, 2010, Maria Kaczyńska and Lech Kaczyński were brought in a solemn procession from Kraków's St. Mary's Church over the Royal Route to a crypt in Wawel Cathedral and buried there. About 20 heads of state and government, including Russian President Dmitri Medvedev , attended the state funeral. Around 150,000 people attended the funeral procession. Due to the dangers of volcanic ash after the eruption of Eyjafjallajökull in Iceland, air traffic in large parts of northern and central Europe was severely impaired at the time of the funeral ceremonies, which is why many heads of state were unable to travel. The place of the burial itself was considered controversial in Poland, as the Wawel is one of the most important national symbols and was once the political and religious center of Poland. Critics were of the opinion that the failed presidential couple should not have been buried next to kings and national heroes.

Kaczyńska has received numerous awards, including the Grand Cross of the Order of Malta (May 14, 2007) and the Polish television award Wiktor 2007 (May 31, 2008). In 2008 a new Dutch variety of tulips was named after her and she received the Order of Infante Dom Henrique (Grã-Cruz). Posthumously Kaczyńska received the Order of Polonia Restituta (Grand Cross) on April 16, 2010 . The friendly Georgian president's wife Sandra Roelofs was the national cancer screening center Varketili in Tbilisi after Kaczyńska name. Roelofs also dedicated the Polish edition of her autobiography to her, in which she reports on their mutual friendship, and launched a scholarship program for classical music and medicine that bears Kaczyńska's name.