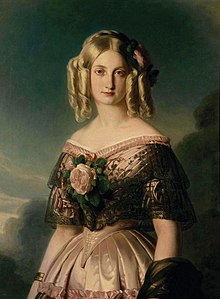 Maria Karolina Augusta of Naples and Sicily, detail from a portrait by Franz Xaver Winterhalter painted in 1848 in the Palace of Versailles

Maria Karolina Augusta of Naples-Sicily (born April 26, 1822 in Vienna , † December 6, 1869 in London -Twickenham) was a princess of Naples-Sicily from the House of Bourbon . By marriage, she was also Duchess of Aumale from 1844 until her death .

As a member of the French royal family, she and her husband Henri d'Orléans had to go into exile in England after the February Revolution in 1848 . Her fortune provided the family with a living for the first months after they left France.

Maria Karolina Augusta was the daughter of Leopold of Naples-Sicily , Prince of Salerno, and his wife, Archduchess Maria Clementine of Habsburg-Lothringen . She was also the granddaughter of the Austrian Emperor Franz I. His fourth wife, Karoline Charlotte Auguste von Bayern, was her godmother. Via her mother, Maria Karolina was also the niece of Marie Louise of Austria , Napoleon's second wife and Empress of the French.

In the family circle, Maria Karolina was only briefly called Lina .

She married her cousin Henri d'Orléans, Duke of Aumale, the fourth son of Louis-Philippe , King of the French, and his wife Maria Amalia of Naples-Sicily , who was also Maria Karolina's aunt, on November 25, 1844 in Naples . The couple had four children together, but only two of them reached adulthood: 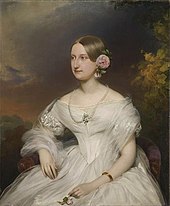 Maria Karolina Augusta at the age of 20; Painting by Franz Schrotzberg in the Musée Condé, Chantilly Castle

The princess spent the first years of her life under the supervision of her mother at the Austrian imperial court in Vienna and was officially introduced into society there. As a teenager she returned to Naples with her family.

In the 1830s and 1840s there were not many princesses from the European aristocracy who were of a marriageable age, and so there were various marriage candidates who vied for the hand of Maria Karolina. Ultimately, the choice fell on Henri d'Orléans, a son of the French King Louis-Philippe, who had made a big impression on her during a stay at her father's court. The marriage negotiations began at the end of August 1844, and the engagement of the two was announced in the Revue de Paris on September 17 of the same year . The connection was anything but a love affair. Henri d'Orléans described his wife in a letter to his teacher Alfred-Auguste de Cuvillier-Fleury as "not beautiful, but also not having anything unpleasant about her". The latter agreed, but also attested her “exquisite appearance” (“[…] n'est pas jolie, mais c'est une miniature exquise.”). Henri had only looked for possible marriage candidates under pressure from his parents and finally decided in favor of the small and petite Maria Karolina Augusta in order to forestall possible marriage proposals from other European princes.

The marriage took place on November 25, 1844 - the date corresponded to the wedding anniversary of the French royal couple - at the request of the groom in Naples, although Maria Carolina's future in-laws would have preferred it if the marriage had taken place in Paris . The place of the civil marriage was the royal palace of Ferdinand II. On the same day the church wedding was celebrated with great pomp. The bride brought the stately sum of 517,000 gold francs into the marriage. The festivities on the occasion of the wedding, such as balls, receptions, hunting events or theater galas, lasted for more than two weeks. However, Maria Karolina Augusta traveled by ship to Toulon with her husband on December 2, 1844 . From there, after a lavish reception, they went through the city to Paris, where the young couple moved into an apartment in the Tuileries Palace .

During the first third of 1845, which was determined for Maria Karolina by representation duties at official occasions such as balls, theatrical performances or meetings of the couple, the newly married couple finally had the opportunity to get to know each other better. A mutual esteem developed and throughout her life the princess was a loyal and devoted wife to her husband who never made demands. Thanks to her charming manner, her gentleness and her friendliness, she was also able to win over her husband's family for herself. Contemporaries described her as amiable and witty ("[...] on la dit gentille, spirituelle; [...]"). In May 1845 she and her husband moved into his Chantilly Castle , which Henri had rebuilt and modernized specially for this purpose.

Maria Karolina also stayed by her husband's side after he was appointed Governor General of Algeria in September 1847 and his presence in the country became necessary.

After the February Revolution of 1848, Henri d'Orléans went into exile in England and was banished from France by decree of May 16, 1848. Maria Carolina followed her husband to Claremont in the county of Surrey , where the couple temporarily in Claremont House settled. For the first few months they had to finance their living with the duchess selling parts of her valuable jewelry.

Maria Karolina soon belonged to the close circle of friends of the British Queen Victoria , whom she also visited in her residence Orleans House in Twickenham - now a part of London. The duke couple had moved there from Claremont on April 16, 1852. After a long journey from August 1864 across Europe - including Belgium, Germany, Austria, Hungary, Spain, Switzerland and the Orient - she preferred to spend her time at the Wood Norton Hall estate in Worcestershire .

The unexpected death of her first-born Louis Philippe in 1866 plunged the Duchess into a deep crisis from which she never fully recovered. After six weeks of illness caused by illness, Maria Karolina Augusta of Naples-Sicily died on December 6, 1869 at the age of 47 in Orleans House. After she was first buried on December 10th in the Catholic chapel of Weybridge , her body was transferred to Dreux in 1876 ​​by her husband, who had returned to France , and buried in the Chapelle royale de Dreux .