The New Playhouse, later a venue under the names Metropol and Goya

The Metropol , also known as Theater am Nollendorfplatz , Neues Schauspielhaus and Goya , is the most striking building next to the underground station at Nollendorfplatz 5 in the Schöneberg district of Berlin . It was built in 1905/1906 as a new theater with a theater and concert hall by the company Boswau & Knauer . The author and theater director Herman Haller ran the theater on Nollendorfplatz from 1914 to 1923. Erwin Piscator was in charge of the Piscator stage from September 1927 to September 1928 . In the post-war period , it housed a cinema and the Metropol nightclub for a long time before it was converted into the posh dining and dance club Goya in 2005 . In 2006 Goya AG filed for bankruptcy . From June 2007 to the beginning of 2010 it was renovated and rented out by the Treugast consultancy . From 2010 the Nollendorfplatz 5 operator GmbH operated the house as an exclusive event location with various types of use (restaurant, bar, club, event rooms etc.), it was closed again in 2014 and reopened as Metropol in 2019 .

Nollendorfplatz with the New Playhouse at the junction with Motzstrasse in the background. The tower on the right is the American Church in Berlin , built in 1903 (destroyed in 1944). The dome of the high station can be seen on the left edge of the picture , after 1905/1906 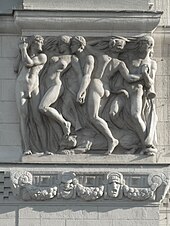 Figure decorations on the facade

The theater was built in 1905/1906 at the same time as the construction of the first elevated railway line . Initially, the new theater building designed by Albert Froelich in the Boswau & Knauer office was called the Neues Schauspielhaus . A theater with 1108 seats was built and in the same building the "Mozart Hall", completely clad in mahogany wood, which was intended as a concert hall and, with its pompous furnishings, was intended to appeal to the imperial court and the rich bourgeoisie.

The facade was designed in the clear style of the beginning modern , still connected with some echoes of the previously dominant Art Nouveau . A rounded protrusion over the main portal with arched windows forms the center of the building. Larger-than-life figures bring in pathetic elements. Just as the theater shows the whole spectrum of life, the dancing figures express feelings between happiness and fear. The lower section is adorned with smiling and sad stone masks. Two tower extensions, which extend beyond the house, support the effect of the vertical posts, pillars and extensions, which strive towards the sky. A receding gable forms the roof end . Some baroque elements, such as offset corners, are also present.

The building, which was criticized at the time of its construction because of its inconsistent and pompous facade decoration, has been a listed building since 1997 . 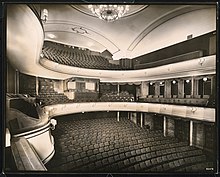 Opened with William Shakespeare's Storm , the house soon devoted itself to the light muse. In 1914 the operetta with music by Walter Kollo Der Juxbaron ran in the Theater am Nollendorfplatz , which had already been premiered on November 14, 1913 in the Carl Schultze Theater in Hamburg with the young Hans Albers . There were premieres with music by Walter Kollo, a. a. 1914 Always firm druff , 1917 the operetta Drei alten Schachteln . After the First World War one tried it with operettas. Works by Eduard Künneke , among others, were premiered : Die Vielgeliebte (1919), When Love Awaks (1920) and The Cousin from Dingsda (1921). In 1925 Arthur Schwelb, previously co-managing director of Meinhard - Bernauer 'sche Bühnen, took over the theater on Nollendorfplatz. On April 22, 1927, the operetta Three poor little girls with music by Walter Kollo was premiered in the Theater am Nollendorfplatz .

From September 1927 to September 1928 Erwin Piscator moved in with his political theater and now it was again called Theater am Nollendorfplatz . The opening happened through the mediation of the actress Tilla Durieux in Berlin with the staging of Ernst Toller's Oops, we live! (September 3, 1927). As a Piscator stage , the house gained national importance with time-critical productions and a new type of stage technology ( simultaneous stage , film projection, etc.). John Heartfield designed sets, George Grosz programs and Bertolt Brecht worked for some time in the dramaturgy.

Stage drawings by George Grosz for a Piscator production of the good soldier Schwejk were the trigger for a blasphemy trial against Grosz and the publisher Wieland Herzfelde in 1928/1931 . Among them was the famous image of Christ in the gas mask . The defendants were acquitted.

On December 22nd, 1928, the world premiere of an operetta with music by Walter Kollo Jettchen Gebert took place in the Theater am Nollendorfplatz. The premiere of Nico Dostal's operetta Clivia followed on December 23, 1933.

During the time of National Socialism the stage was used again for film and theater. At first it was subordinate to the Verband der Volksbühnen under the general director of Gustaf Gründgens . In March 1938, however, it was separated again and placed under the directorship of the popular actor Harald Paulsen , who subsequently had mainly operettas performed here.

Use as a cinema

The Mozart Hall was rebuilt as early as 1911 so that films could also be shown. The cinema achieved great popularity under the direction of Hanns Brodnitz, who was later murdered in Auschwitz (from 1922). The audience was surprised again and again by his wealth of ideas: For example, the ushers were always dressed in costumes that matched the respective film theme.

In 1925 there was the premiere of the first UFA - sound film The Girl with the woods , but it was a failure due to technical failures. In 1926 the UFA took over the cinema and reduced the capacity to 996 seats. In 1930 it was modernized under the architect Georg Leschnitzer .

On December 4, 1930, the German premiere of the film In the West, nothing new, based on the novel of the same name by Erich Maria Remarque, took place in front of an invited audience . Since this film the Nazi ideology did not fit, organized Gauleiter Joseph Goebbels day-long protests against the anti-war film: When this then next day delivery points, put SA -People of white mice and put stink bombs , rowdy Reichstag deputy of the NSDAP used their parliamentary immunity in order to disgust the audience from the house. On the following days, the performances in the Mozart Hall could only take place under massive police protection. The campaign was a success: on December 11, 1930, the Supreme Film Inspectorate , headed by Ernst Seeger, at the request of the state governments of Thuringia , Braunschweig , Saxony , Bavaria and Württemberg banned the screening of the film in the German Reich because of the “endangerment of the German Reputation ”and the“ degradation of the German Reichswehr ”.

In 1942 the Lichtspiele Mozart Hall was renamed Nollendorf-Palast. During the Second World War , the theater was badly damaged by Allied air raids . The facade, foyer and the Mozart hall were largely preserved.

In the post-war years , the Theater am Nollendorfplatz (temporarily also: Neues Theater am Nollendorfplatz ) continued the operettas and comedy productions of earlier years. It was initially played in alternative venues such as the Theater am Schiffbauerdamm , the Schöneberg Town Hall or the Titania Palace and only occasionally in the house on Nollendorfplatz. At times, the Mozart Hall , based on the nearby and also destroyed Scala , served as a general-purpose room under the name Neue Scala (rarely: Neue Skala ), in which, in addition to film screenings, less successful variety and revue performances were given. From 1952 it was again exclusively a film theater and got its name Metropol, which is still known today . In the 1970s there was a specialization in pornographic films.

The game was stopped in 1977 and a discotheque was held for a long time. In the late 1980s, the Metropol was one of the most famous nightclubs in Berlin with its unique laser show. Celebrities were there too: Neil Tennant ( Pet Shop Boys ), Derek William Dick alias Fish ( Marillion ), Einstürzende Neubauten and Bela B. ( The Doctors ) were seen there. Concerts often took place during the week: Depeche Mode played the first Berlin concert for their debut LP here. Also Human League , OMD , Front 242 , U2 , The Sisters of Mercy , Killing Joke , Red Lorry Yellow Lorry and numerous bands from the UK performed here, among other things, as well as national careers like Nena and her band started in metropolitan or in the first floor loft club. After peaking in the early 1990s, its fame completely faded in the years that followed.

In 2000 the taboo- breaking KitKatClub moved into the Metropol. Due to irreconcilable differences between the owner (landlord) and the club, the club moved out again in the same year and looked for another venue.

In 2005, the Metropol was converted into the classy Goya dining and dance club with great media interest . The renovation cost eleven million euros and was designed by Hans Kollhoff . The project was financed in the form of a stock corporation , and numerous celebrities had participated. Due to a lack of visitors, the club filed for bankruptcy in March 2006 after five months of operation . It was reopened on June 16, 2007. The operator, the management consultancy Treugast Solutions Holding GmbH , which also runs the Tempodrom , has rented the property for ten years.

In 2008 Miley Cyrus gave her first concert in Germany in the Goya Club .

From March 2010 the Nollendorfplatz 5 operator GmbH managed the Goya and the house was mainly used as an exclusive event location with regular club operations. In May 2014 the Goya was closed again. Events under the name Metropol have been taking place again since April 2019 .

From the end of the 1950s, the Berlin Jesus People congregation, an interdenominational free church congregation that later became popular under Pastor Volkhard Spitzer , met regularly in the Metropol . In the winter of 1961/1962, the theater was used as a location for the film The invisible claws of Dr. Mabuse .