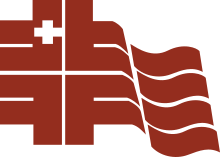 The National League A is the top division in Swiss handball . The NLA and the NLB comprise the Swiss Handball League (SHL).

The Swiss champion was determined in tournament mode. The six regional champions played against each other.

The league was increased to 8 teams. A single round was played, in which the bottom of the table was relegated to National League B at the end of the season. From the 1962/63 season, the double round was introduced.

The league was increased to 10 teams. A double round was still played. The winner became Swiss champions, the teams in ranks 9 and 10 were relegated to the National League B.

Due to the World Cup in Switzerland, only a shortened championship was held. This comprised a total of only 18 laps.

After the main round, a championship round was still played. The worst four teams are divided up and play in 2 promotion / relegation groups to stay / relegate in the NLA with the best 8 representatives of the NLB. A double round of 10 games each is played.

The league was enlarged to 12 teams. After a qualifying round with 14 games, the teams ranked 1 to 8 play a final round. The teams in ranks 1 to 4 play a playoff (1st vs 4th, 2nd vs 3rd). The winner of the playoffs becomes Swiss champions.

The league was reduced to 8 teams. The final round has been abolished. For this, the teams played a 4-professional round of 28 games each. The ranks 1-4 qualified for the playoff. The teams in ranks 7 and 8 play a promotion / relegation round against the first of the NLB East and West.

Final and relegation round

While the first six teams are fighting for the championship title, the last six clubs are playing against relegation, again in a round-trip round (10 rounds).

The first four of the relegation round remain in the NLA, while the last two have to move into the NLB.

Ten clubs have been playing for the title in the NLA since the 2012/13 season. After a simple round-trip round (18 rounds), the league is divided.

Final and relegation round

The teams in ranks 1-6 take all points and all goals from the main round with them to the final round. The six teams play a double round. Then all teams play best-of-5 against each other in playoff mode. There are quarter finals, semifinals and a final.

The teams in ranks 7-10 take all points and all goals from the main round with them to the relegation round and play 10 games. The first and second of the relegation round take part in the playoff quarter-finals. The two last placed play a playout final best-of-5. The loser is relegated to the NLB.

The 10 teams play a main round of 14 games each based on the composition determined by the SHL.

Then a final round is played as a double round with the best 6 teams from the main round (10 games each).

The NLA teams want a simplification of the mode. From the 2019/20 season, the final and relegation round will be abolished. The main round is played as a triple round (27 games). There are also the playoffs of the 8 best teams and the playout of the 9th and 10th place.