Pietzpuhl is a village in the municipality of Möser in the Jerichower Land district in Saxony-Anhalt .

The village can be reached via a spur road that branches off from Bundesstraße 1 and is only a few kilometers away from an entrance to Autobahn 2 . To the west of the place are agricultural areas, to the east the place is framed by forests. To the northwest rise the Kapaunberg at 105 meters and the Kapaunenberg at 102 meters, which with these heights are among the highest points in West Fleming. In the first half of the 19th century there was one of 62 stations on a Prussian optical telegraph line that connected Berlin with the Rhine Province to Koblenz.

A place Putzpul was mentioned for the first time in a document dated January 6, 1306, which sealed the change of ownership from the cathedral chapter of Magdeburg to the diocese of Brandenburg . After that, the place for a long time was without form, and only at the end of the 15th century was in its place a Vorwerk now Pitzpful hereby established. This was destroyed during the Thirty Years War . 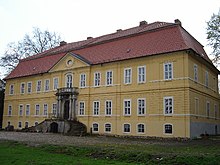 At the beginning of the 18th century there was already a castle, which had to give way to a new building in the Baroque style in 1730 , which Werner von Wulffen , also Canon von Halberstadt , had built. The von Wulffen family had previously acquired Pietzpuhl in order to set up a manor there. The palace and palace complex were extensively expanded by subsequent generations. The rich artistic equipment from the time of origin, such as B. stuccoing, doors, chimneys, parquet and wall paneling as well as the staircase with its asymmetrical balusters in the railing has largely been preserved. Since the end of the Silesian Wars from 1748 onwards, Frederick the Great had annual revues held between May 25 and 28 on the site between Pietzpuhl and Körbelitz , a kind of military show and maneuvers by the Prussian army . The fields were not allowed to be tilled at this time, the farmers received compensation. Since 1715 there had been general revues carried out by his father every year. The infantry and cavalry of the Duchy of Magdeburg, the Principality of Halberstadt and the Altmark took part in the revues. The king dismounted for this in Pietzpuhler Schloss. Around 1750, two Wulffen brothers had the entrance to the mighty manor house flanked by two large baroque gentlemen's houses on the manor, each of which was only a little smaller than the castle itself and each could have been a stately manor house in order to accommodate the high officers . Frederick the Great is said to have been so angry about this useless opulence that he then took another good from the Wulffen and made it a state domain; from then on he stayed in modest quarters in Körbelitz, where he also gave the big dinners for the senior officers at the end of the maneuvers.

Queen Luise of Prussia was also a guest at Pietzpuhl Castle in 1803 on the occasion of a troop revue. She was accommodated there with other guests due to a troop revue. When such a meeting took place for the last time in 1805, the French Marshal Bernadotte , accompanied by Generals Gérard , Berthier , Eblé and Kellermann, was one of the maneuvering guests; a little later they were to return as occupiers in the Napoleonic Wars . The von Wulffen family's regular contacts with the Prussian royal family resulted in a close connection that culminated in the fact that the Prussian king and the princes and princesses often became godparents of the Wulffen children. A display board on the Schanzenberg and a replica of the earlier memorial on the Schanzenberg in Körbelitz reminds of the troop revues; the Körbelitz firing range was used for military exercises for 300 years.

The castle courtyard is closed on the village side with bars and vase-crowned pillars. In the years 1808 to 1828 Carl von Wulffen laid out a castle park in the English style that merged south into the forest ; Behind a rectangular parterre flanked by linden trees, an avenue followed in the central axis, which later led as a wide aisle through the bosket. Carl von Wulffen became known as one of the founders of modern agriculture. He taught at the Prussian Agricultural Academy in Möglin and implemented the theories he had developed for soil improvement on the poor soils of his estate.

In the course of the Prussian territorial reform of 1818, Pietzpuhl, which at that time had about 160 inhabitants, was incorporated into the Jerichow I district with the district town of Burg. From around 1840 an alcohol distillery was housed in the western cavalier house.

Lothar von Wulffen (1873-1945), a former member of the Prussian House of Representatives, was the last entrant on Pietzpuhl. With the land reform in 1945, the von Wulffen family was expropriated and the castle was transferred to the Pietzpuhl communal community. The community initially assigned refugee families and used the cellar and basement itself. After the last residents left the castle in 1965, it stood empty.

In 1997 the von Wulffen family managed to regain their former ownership of the palace and park. In 2001, the local community acquired one of the cavalier houses belonging to the castle grounds , rebuilt the dilapidated building true to the original and set up an excursion restaurant, seminar rooms, wedding rooms, painting school and rooms for exhibitions. The other cavalier house is still in ruins. The palace and palace park were placed under monument protection.

The last mayor of the municipality of Pietzpuhl was Anke Rasch. She has been the local mayor since the incorporation .

Blazon : “Under a shield head quartered with silver and black ; a silver lupine in blue. "

The colors of Pietzpuhl - derived from the tinging of the coat of arms - are silver (white) - blue.

The coat of arms was designed in 2004 by the municipal heraldist Jörg Mantzsch .

The flag is striped blue - white - blue (1: 4: 1). In the longitudinal form the stripes run vertically, in the transverse form horizontally, the coat of arms is in the middle.

From the spring of 2008 until the incorporation into the community of Möser on January 1st, 2010 there was a compulsory fire brigade in the village, after the volunteer fire brigade could no longer find enough members.

Born in the village

Localities of the community of Möser