Map of the Polish Spiš

Niedzica Castle on the reservoir 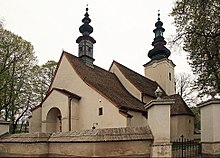 The Polish Zips ( Polish Polski Spisz ; Slovak: Poľský Spiš ) is a region in southern Poland on the border with Slovakia in the Lesser Poland Voivodeship . In Polish and Slovak the name Zamagurze is also common for the northern Spiš. In addition to the Polish Spiš, Zamagurze also includes the northern area of ​​the Slovak Spiš on the border river Dunajec .

The Polish Spiš lies in the northeast of the Spiš . It is bounded to the north and west by the historical border of the Białka River , which forms the border with the Podhale Region . The area around Nowa Biała is an exception ; this is on the other side of the Białka, as the river changed its course after flooding in the 17th century. In the northeast, the Jezioro Czorsztyńskie reservoir and the Dunajec river are the border with the Gorce , Pieninen and Sandezer Land regions . In the south and southeast the mountain range of the Spis Magura forms the border with Slovakia. The area of ​​the area is 195.5 km².

In the northern part of the Polish Spiš, the mountain range of the Spis Pienines runs in an east-west direction . To the south of it lies the valley of the mountain streams Łapszanka and Trybski Potok . South of the valley is the mountain range of the Pogórze Spiskie , which also runs in an east-west direction , a part of the Pogórze Spisko-Gubałowskie , which merges into the Spiš Magura in the east and south and forms the border with Slovakia. In Pogórze Spiskie lies the Kuraszowski Wierch at 1040 m above sea level, the highest mountain in the Polish Spiš.

The area includes the following 14 villages:

The area was forested in the early Middle Ages and only very sparsely populated. In 1004 Bolesław I. Chrobry joined the whole of today's Slovakia to the Polish state. In the middle of the 11th century their south came to the Kingdom of Hungary. In 1209 the Hungarian king entrusted the Berzeviczy family with the Zamagurze region . Since 1320 she ruled this region from the Niedzica Castle . In the 16th century Zamagurze came to the families of the Łaski , Horvath , Giovanelli , Salamon and Jungsfeld , who all ruled from the Niedzica Zamagurze castle. Polish Górals from the Sandezer Land, German settlers from Saxony , Lemken from Ruthenia and Wallachians from Wallachia were settled in Zamagurze . The region suffered from the incursions of the Tatars in the 13th, the Hussites in the 15th, the religious wars of the 17th and the world wars of the 20th century.

The area remained in the Spiš region in the Kingdom of Hungary until 1918 . In the 19th century, Slovak became the language of the church and schools, but the local Gorals spoke Goral , a Polish dialect that was always considered Slovak in the Hungarian censuses, unlike the Goral villages of the Orava .

After the end of the First World War , Poland made historical claims to parts of the Spiš at the Paris Peace Conference . The current limit was largely set at the Spa Conference on July 28, 1920. Edvard Beneš , in his former function as Foreign Minister, agreed to the assignment of 14 localities in the north-west of the Spiš (especially Nowa Biała , Jurgów and Niedzica with an area of ​​195 km² and 8,747 inhabitants), the so-called Polish Spiš.

Between 1920 and 1925 the Polish Spiš belonged to the powiat Spisko-Orawski , from July 1, 1925 to the powiat Nowotarski. In 1921 the thirteen communities had a total of 8,263 inhabitants, of which 8,062 Poles, four Ruthenians, 43 Germans, 21 Jews, 133 of other nationalities (of which eleven Czechs, four Russians, 76 other Slavs), 8141 Roman Catholics, five Greek Catholics, five evangelicals, four other Christians, 108 Israelite.

After the German attack on Poland (also with the help of Slovak troops) and its defeat, Slovakia annexed the area again (officially on November 21, 1939), but had to give it back in 1945. Polish troops occupied the area on June 17, 1945, and a 1947 treaty reaffirmed the pre-war borders.

The inhabitants of the Polish Spiš are Góralen , and their folklore is similar to the folklore of the other Gorals in Podhale as well as the Beskids. However, they have their own costume, which they wear, among other things, when rafting through the Dunajec Gorge . The architecture of the Spiš Góralen is also unique. The churches are often, but not always, built of stone, for example in Frydman , Niedzica , Trybsz , Łapsze Niżne and Kacwin , whereas the Podhal and Beskid Góralen built their churches mostly of wood. The construction of the alpine huts, farms and granaries is also specific. In the Polish Spiš there are open-air museums in Jurgów , which illustrate the construction of the Spis Góralen. The baroque wooden church in the same place is also worth seeing. The most important monument of the Polish Spiš is certainly the Niedzica Castle .

Numerous hiking, riding and cycling trails lead through the mountain ranges of the Polish Spiš. From the peaks and passes there are panoramic views of the surrounding mountains, especially the Tatra Mountains . You can practice water sports on the Białka River and the Jezioro Czorsztyńskie Lake . Czarna Góra is also popular with paragliders . There are several ski resorts in Jurgów, Czarna Góra , Niedzica and Kacwin, of which the ski resorts in Jurgów and Czarna Góra are the largest: