Quetzalcoatlite is a very rare mineral from the mineral class of " oxides and hydroxides ". It crystallizes in the trigonal crystal system with the chemical composition Cu 3 2+ Te 2 6+ Zn 6 [O 12 | (OH) 6 ] · (Ag, Pb, □) Cl. The elements silver and lead indicated in the round brackets can represent each other in the formula ( substitution , diadochie), but are always in the same proportion to the other components of the mineral. The symbol □ indicates that this structure place is not fully occupied, the crystal lattice so voids contains.

Quetzalcoatlite was first discovered in the "Bambollita Mine" (also "Oriental Mine") near Moctezuma in the Mexican state of Sonora and described in 1973 by Sidney A. Williams, who named the mineral Quetzalcoatl after the creator and sky god of the Toltecs, Aztecs and Maya .

In the meanwhile outdated, but still in use 8th edition of the mineral classification according to Strunz , the quetzalcoatlite belonged to the mineral class of "oxides and hydroxides" and to the department of " sulfites , selenites and tellurites ", where it was found together with francisite , keystoneit , kinichilit and zemannite formed the unnamed group IV / K.10 .

The 9th edition of Strunz's mineral systematics , which has been in effect since 2001 and is used by the International Mineralogical Association (IMA), also assigns the quetzalcoatlite to the class of "oxides and hydroxides", but in the category of "hydroxides (without V or U)" . This section is further subdivided according to the possible presence of OH or H 2 O and the crystal structure, so that the mineral is classified according to its composition and structure in the sub-section of “hydroxides with OH, without H 2 O; Layers of edge-linked octahedra ”can be found, where it is the only member of the unnamed group 4.FE.45 .

In contrast to the Strunz systematics, the systematics of minerals according to Dana , which is mainly used in the English-speaking world, assigns quetzalcoatlite to the class of " sulfates , chromates and molybdates " and there in the category of "selenites, tellurites and sulfites". Here he is to be found as the only member of the unnamed group 06/34/03 within the sub-section “ Selenites - Tellurites - Sulphites ”. 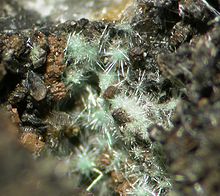 In Mexico, apart from the type locality "Bambollita Mine" near Moctezuma, no other location is known, but the mineral could still be found in various states of the USA. In Arizona these are the “Empire Mine” and the “Old Guard Mine” (Royal Guard Mine) near Tombstone , in California the “Blue Bell Pit Field” (Hard Luck pit field) near Baker (California) and in Utah the “Centennial Eureka Mine” "In Juab County and the" Trixie Mine "in Utah County .