Ralf Reski (born November 18, 1958 in Gelsenkirchen ) is a German professor of plant biotechnology and former dean of the Faculty of Biology at the Albert Ludwig University of Freiburg .

Ralf Reski studied biology , chemistry and education at the Universities of Giessen and Hamburg . He completed his doctorate in genetics in 1990 at the University of Hamburg, his habilitation in general botany followed in 1994. From 1996 to 1999 he was a Heisenberg fellow of the German Research Foundation (DFG) . He is married and has two sons

Following offers from domestic and foreign universities, he was appointed professor and full professor at the University of Freiburg in 1999 and was given the newly founded chair for plant biotechnology. Since 2004 he has also been teaching at the École supérieure de biotechnologie Strasbourg (ESBS). From 2001 to 2011 he was director of the plant biotechnology section at the Center for Applied Biosciences (ZAB). In 2004 he became a member of the International Moosgenom Consortium. Reski is also a founding member of four institutions funded by the Excellence Initiative: Spemann Graduate School for Biology and Medicine (SGBM), the Center for Integrative Biological Signaling Studies (CIBSS) , the Cluster Living, Adaptive and Energy-Autonomous Materials Systems (livMATs) and the Excellence Cluster Center for Biological Signaling Studies (bioss). Reski is also a founding member of the Freiburg Initiative for Systems Biology (FRISYS) funded by the BMBF as part of FORSYS . In 2003 Ralf Reski became a member of the Supervisory Board of BIOPRO Baden-Württemberg GmbH and was appointed by Finance Minister Willi Stächele for a further term of office in 2009, which ended in 2012. From 2007 to 2010 Reski was a member of the Baden-Württemberg Innovation Council of the then Prime Minister and current EU Commissioner Günther Oettinger .

From March 2008 to March 2012 Reski was chairman of the DNK, the German National Biology Committee . In this position he was a member of the advisory board of the Association of Biology, Biosciences and Biomedicine in Germany (VBIO) from September 2008 to March 2012 . At the 30th General Assembly of the International Union of Biological Sciences (IUBS) Reski was elected to the extended board of this non-profit organization , of which he was a member until 2012. In 2011 Ralf Reski was appointed as a fellow at the Freiburg Institute for Advanced Studies (FRIAS) and was elected for life as a member of the Heidelberg Academy of Sciences .

Reski is one of the co-founders of the Trinational Institute for Plant Research. Since 2010 he has been the elected senator and speaker of the professors in the Academic Senate of the University of Freiburg. In 2012 Ralf Reski organized the Plant Biology Congress, which was attended by over 1000 scientists from 60 countries. Reski has been a fellow at the University of Strasbourg at the Institute for Advanced Study (Institut d'Etudes Avancées, USIAS) since 2013 . Since 2015 he has been coordinating the international Erasmus program "Trans-regional environmental awareness for sustainable usage of water resources" - or TREASURE-WATER for short of the European Union , which is used for university education and knowledge transfer in order to sustainably increase the common water resources of Russia and Kazakhstan use. 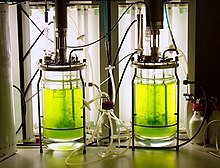 In his scientific work, Ralf Reski mainly deals with moss plants and examines genetics , proteins , metabolism and special features in the cell development of mosses and uses the very efficient homologous recombination to produce knockout mosses . With over 250 scientific publications, he has played a key role in ensuring that mosses are recognized worldwide as model organisms in biological research. The complete genetic material of the small bladder cap moss ( Physcomitrella patens ) was deciphered in December 2007. This work was largely funded by the US Department of Energy and the DFG . In 2010 he founded the International Moss Stock Center (IMSC), a biobank that stores and distributes moss plants from all over the world. This resource center issues “accession numbers” for the stored mosses, which can be used for publication purposes.

As biotechnologists, Reski and colleagues identify previously unknown genes and their role in agriculture and forestry . But also the production of complex biopharmaceuticals in the moss bioreactor , the so-called molecular pharming , and their use for the pharmaceutical industry are among his main research areas. The working group uses methods from bioinformatics , systems biology and synthetic biology , for example in the bioss excellence cluster and in the FORSYS program launched by the BMBF .

Ralf Reski coined the term “ plastoskeleton ” in 2000 in analogy to the term “ cytoskeleton ” and thus presented a new concept for cell biology , how chloroplasts , the green cell organelles of plants, change their shape and divide.

In 1999, BASF invested more than DM 30 million in an initially four-year cooperation with Reski to jointly discover new genes that can make crops more resistant to drought , cold and pest infestation . But plants with improved ingredients such as vitamins and polyunsaturated fatty acids were also in the joint research interest.

Also in 1999 Ralf Reski co-founded the biotechnology company greenovation Biotech GmbH in Freiburg im Breisgau . greenovation has developed a moss bioreactor for the biotechnological production of active pharmaceutical ingredients, which is a safe and cost-effective alternative to other production systems. In 2017, the first clinical phase 1 study for the analysis of the enzyme α-galactosidase A produced in mosses for the treatment of the metabolic disorder Fabry disease was completed.

In 2010 Reski and colleagues discovered a new mechanism of gene regulation in eukaryotes, epigenetic gene silencing by microRNAs

Reski is involved in the Mossclone project, a European funding program that is funded in the FP7 research framework program. In it, scientists are researching a new biotechnological process to monitor air quality with mosses . This should serve to improve the previous pollutant monitoring in the air.

In 2018 Reski and other researchers investigated six RecQ helicases in the little bladder cap moss ( Physcomitrella patens ) and in the cress wall ( Arabidopsis thaliana ). They found that the RecQ4 protein in moss is orthologous to the Bloom syndrome protein . It acts as a repressor of homologous recombination , protects the genome from mutations and is crucial for the development of the embryo and the subsequent development of the plant . In contrast, the RecQ6 protein in moss improves gene targeting .

Membership in the editorial board of professional journals