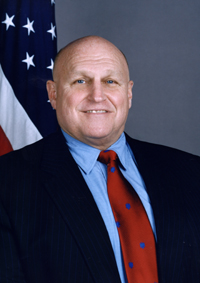 Richard Lee Armitage KCMG AC CNZM (born April 26, 1945 in Boston , Massachusetts ) is an American diplomat and politician ( Republican Party ). He served as Vice Secretary of State of the United States from March 26, 2001 to February 22, 2005 .

Armitage graduated from the United States Naval Academy in 1967 and took part in the Vietnam War, after which he worked for the US Department of Defense in various countries and various roles. From 1976 to 1978 he worked in the private sector. Between 1978 and 1980 he worked for the US Senator Bob Dole as his assistant. After that he was one of Ronald Reagan's advisors .

From 1981 to 1983 Armitage was Deputy Assistant Secretary of Defense ; in this function he was responsible for East Asia and the Pacific region. He then rose to the position of State Secretary for International Security Policy ( Assistant Secretary of Defense for International Security Policy ). He held this post until 1989. This year he was scheduled for the office of State Secretary in the Ministry of Foreign Affairs ; however, the nomination was withdrawn. He later served as a government negotiator in the Philippines , the Middle East and Europe . Since 1993 he has been working again for the private sector.

From March 2001, Armitage served as US Deputy Secretary of State under George W. Bush. After the terrorist attacks of September 11, 2001 and the planned operations against the radical Islamic Taliban in Afghanistan , it became a priority for the American government to secure the support of Pakistan , which until then had been considered a supporter of the Taliban regime. In an attempt to force this cooperation, Armitage is said to have threatened the Pakistani intelligence chief to attack the country if it did not bow to the demands of the US government.

According to his own statement on his website, he resigned the public office in order to found the company Armitage International, LC together with four partners.

In 2006 he confessed himself to being the source for the exposure of CIA agent Valerie Plame . He had launched Valerie Plame's secret service activities in 2003 as US Vice Secretary of State to the arch-conservative columnist Robert Novak - disreputed as the "Prince of Darkness" - and to the Watergate legend Bob Woodward of the Washington Post . This treason constituted a serious criminal offense under US law.

In March 2006 he was appointed to the Board of Directors of the US energy and oil company ConocoPhillips .

Vice Secretary of State of the United States