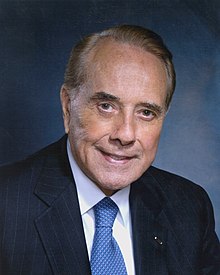 In 1941, shortly before he was called up for military service, Dole began studying medicine at the University of Kansas (KU). He served as a lieutenant in the 10th Mountain Division during World War II . On April 14, 1945, he was seriously wounded by German machine gun fire during combat operations on the Italian front near Bologna . After a 39-month hospital stay, he was able to continue his studies. However, Dole lost a kidney and his right arm was permanently paralyzed. He has now studied law at the University of Arizona and the University of Kansas. As early as 1950, Dole was elected to the Kansas House of Representatives for two years . After graduation, he was district attorney ( County Attorney , the US also elective office) of his home district Russell County. He married Phyllis Holden in 1948, with whom he has a daughter named Robin, but divorced in 1972.

In 1961, Dole was elected to the House of Representatives for the Republican Party . Since 1968 he was a member of the Senate for Kansas. In 1976 he was a Republican vice-presidential candidate , but lost along with Gerald Ford to Democrats Jimmy Carter and Walter Mondale . In 1980 and 1988, their own presidential candidacies failed in the primaries. From 1981 to 1985 he was Chairman of the Committee on Finance and from 1985 to 1987 Chairman of the Special Committee on Security and Cooperation in Europe. From 1985 to 1987 and from 1995 to 1996 he was also the majority leader in the Senate. In 1987, together with Senator Jesse Helms, he mobilized US support for the RENAMO Liberation Army in Mozambique . In 1996 he was the Republican presidential candidate , for which he even gave up his Senate seat in early June 1996, but failed again in an election, this time against Bill Clinton .

Bob Dole is still working as a lawyer in Washington at over 90 years of age . In February 1999 he was sent to the Rambouillet negotiations by then US Secretary of State Madeleine Albright . He has now remarried, his second wife is Elizabeth Dole , who was the United States Secretary of Transportation and Labor and the US Senator for North Carolina .

Since 1999 there has been at the Kansas University in Lawrence, Kansas, the Robert J. Dole Institute for Public Policy, which holds conferences on political topics (presidency, international politics, ...) and to which an archive is attached that contains the papers from Dole's political Career managed and evaluated (similar to the so-called Presidential Libraries of the former US presidents).

In 2013 Dole criticized the Republicans for not being able to pass laws or a budget together. He also said: “Ronald Reagan would not have suffered in the party today, nor would Richard Nixon because he had ideas. I doubt if I would be welcome there. ”He said of Democratic President Barack Obama that he was a very articulate speaker, but criticized Obama for not being careful enough to engage in dialogue with Congress.

Dole received in 2008 along with the Democrats George McGovern the World Food Prize .

In January 2018, Dole received the Congress Gold Medal of Honor .

Bob Dole made a guest appearance on the sitcom Susan . Often seen on television was a mishap during the 1996 presidential campaign when a railing broke at an event and Dole fell from the speaker's platform.

Members of the United States House of Representatives for Kansas

Chair of the Republican National Committee