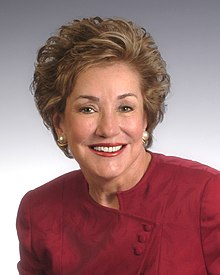 Mary Elizabeth Hanford Dole (* 29. July 1936 in Salisbury , Rowan County , North Carolina ) is an American politician of the Republican Party that the state of North Carolina from 2003 to 2009 in the US Senate represented. Before that, she was a member of the Federal Cabinet as Minister of Transport and Labor .

Elizabeth Hanford Dole has been married since December 1975 to former US Senator for Kansas, Gerald Ford 1976 Vice Presidential nominee, and 1996 Republican Party presidential candidate Robert Joseph "Bob" Dole . There are no children from this marriage.

Elizabeth Dole studied law at Duke University and political science at Oxford and Harvard University . She was the Special Assistant to Virginia Knauer, the consumer affairs adviser in the Nixon government. From December 4, 1973 to March 9, 1979 she was a member of the Federal Trade Commission .

In 1983 she became US Secretary of Transportation in the cabinet of President Ronald Reagan and remained so until September 30, 1987. In this role, she legally introduced the so-called “Dole light”, the third brake light in the car's rear window. Between January 1989 and November 1990 she was Secretary of Labor in President George Bush's cabinet .

From 1991 to 1999 she served as President of the American Red Cross . In 1996 she took a year off from her post to help her husband Bob Dole with his presidential campaign against Bill Clinton , which was unsuccessful. In 1999 she gave up the presidency to explore her chances of running for the US presidency for the Republican Party. In October 1999, she gave up these ambitions.

In 2002 she was elected to the US Senate for North Carolina . There she sat on the Armed Forces Committee, among other things . In the re-election to the Senate on November 4, 2008 she was defeated by the Democratic candidate Kay Hagan . As a result, she had to leave Congress on January 3, 2009.