The Sognefjord in the Norwegian Fylke Vestland is the longest (204 kilometers) and at the same time the deepest (1308 meters) fjord in Europe (the longest and deepest fjord in the world is the Scoresbysund in Greenland with 340-350 km length and 1450 meters depth). It branches into many smaller branches such as the Aurlandsfjord , the Lustrafjord or the Nærøyfjord (the narrowest fjord in Europe).

Its western end is about 80 km north of Bergen near Sygnefest , its eastern end is Årdalstangen (on Årdalsfjord ). The furthest away from the open sea by water, however, is Skjolden at the northern end of the Lustrafjord.

The landscape along the fjord, except in the vicinity of the outer coastline, has the character of high low mountains with transition to high mountains . Along two thirds of the main fjord and most of its branches, heights of over 1000 m above sea level are reached. The high altitudes are above the tree line . The slopes are mostly forested, but in some places the bank is formed by high rock walls made of dark stone. 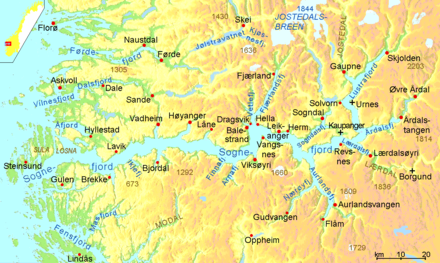 The inner part of the fjord lies on the leeward side of high mountains such as Breheimen (with the Jostedalsbreen glacier ). That is why there is a clear climate difference between the pronounced maritime climate at the point where it flows into the open sea and the more continental climate at the inner end of the fjord and its side arms. In front of the mouth of the fjord there is a rock sill underwater that only allows the warm surface water of the Gulf Stream to flow into the fjord from the North Sea . As a result, the climate is mild overall and enables extensive fruit growing, especially on the north bank.

In four places on the banks of the Sognefjord are stave churches in Urnes is the oldest ever received , another in Kaupanger . Borgund Stave Church , 30 kilometers upstream from Lærdalsøyri fjord harbor, is even more important . The smallest stave church in Scandinavia (with around 40 seats) is the Undredal stave church . The Hopperstad Stave Church in the village of Vik is one of the very early churches of the region. 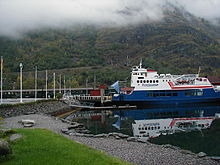 Ferry and train station in Flåm

Almost the entire length of the north bank is followed by a road that runs through a tunnel between Høyanger and Låne and mostly inland between Sogndal and Gaupne. In the south-east, the Lærdal , Aurland and neighboring Flåm and Gudvangen valleys adjoining the ends of the side fjords are connected by road tunnels each over 20 km in length. Ferries cross the fjord at several points, for example from Rutledal to Rysjedalsvika, from Brekke to Lavik, Balestrand – Hella, Hella – Dragsvik and Dragsvik – Vangsnes, Kaupanger – Revsnes, Kaupanger – Årdalsvangen (longitudinal connection), Solvorn – Urnes.

The ferry service between Lavik and Oppedal has been guaranteed by an electric lightweight ferry since summer 2015. The ampere was developed by Siemens together with the Norwegian shipyard Fjellstrand. She covers the 6 km long route every 20 minutes 34 times a day. It is the world's first electric ferry in scheduled service.

Flåm on the Aurlandsfjord is connected to the Bergen Railway by the 20 km long, steep but full- gauge Flåm Railway and thus has a connection to the international rail network. 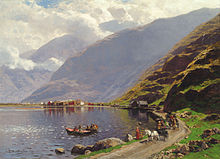 The Sognefjord region is a UNESCO World Heritage Site and has long been attractive to tourists. It offers various national parks, such as the Jotunheimen National Park , the Jostedalsbreen Glacier National Park and the Aurlandsdalen and Utladalen valleys. The highest mountain pass in Northern Europe, the Sognefjellsveien, runs through the Jotunheimen National Park . Another attraction is the Vettisfossen in Øvre Årdal, one of the highest waterfalls in Norway with a free fall of 275 meters.

In addition to scenic features, there are numerous culturally interesting offers. The award-winning Norwegian Glacier Museum in Fjærland , a wild salmon center and Norway's oldest stave church, Urnes stave church, are among them.

In terms of landscape, this part of Norway is one of the most popular hiking regions in Norway. Glacier hikes, kayaking on fjords and glacial lakes, and boat trips or fjord cruises are popular outdoor activities.