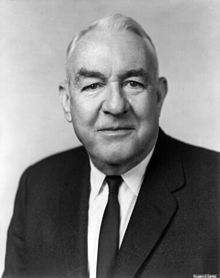 Samuel James "Sam" Ervin Jr. (born September 27, 1896 in Morganton , North Carolina , †  April 23, 1985 in Winston-Salem , North Carolina) was an American lawyer and politician of the Democratic Party of the state of North Carolina represented in both houses of Congress . During his tenure as a Senator , he chaired the Watergate Committee of Inquiry.

Sam Ervin attended public schools in his home country and then the University of North Carolina at Chapel Hill , from which he graduated in 1917. During the First World War he served in France . He received the Distinguished Service Cross , the Silver Star and two Purple Hearts . He passed his law exam in 1922 at Harvard University ; in the same year he began practicing as a lawyer in Morganton. In 1924 he married Margaret Bruce Bell.

In 1922, 1924, and 1930, Ervin was elected to the North Carolina House of Representatives. From 1935 to 1937 he served as a judge on the Criminal Court in Burke County before moving to the Superior Court of North Carolina, where he remained until 1943. On January 22, 1946, he was elected to the United States House of Representatives, replacing his late brother Joseph . He represented North Carolina's tenth constituency until January 3, 1947; he did not stand for re-election.

Ervin then resumed his legal practice. He served as a judge on the North Carolina Supreme Court from 1948 to 1954 before returning to Congress as a senator. On June 5, 1954, he was appointed to succeed the late Clyde R. Hoey ; he also won the by-election due in November of that year. Thereafter, Ervin was confirmed three more times in his mandate, which he was able to exercise until his resignation on December 31, 1974. During this time he gained a reputation as a liberal senator who campaigned for the observance of civil rights and the protection of privacy. As early as 1954 he was a member of the McCarthy Committee. In 1956, he was one of 19 Southern Senators who signed the Southern Manifesto , a document against racial integration in public institutions and equal rights for blacks. At the end of Ervin's senatorial career, he was named chairman of the Committee to Investigate the Watergate Affair in 1973. This was also called the "Ervin Committee". The committee provided the necessary educational work on the Watergate affair, which led to the resignation of President Richard Nixon and the sentencing of his accomplices to prison terms.

As chairman of the Watergate Committee of Inquiry, Ervin earned a high reputation for his integrity and fairness, also and especially in those circles that were not politically close to him:

“Amid all the dirt that Watergate has washed to the surface, Sam Ervin is like a lonely island of cleanliness and credibility. His admirers do not mind that his entire habitus actually belongs to the past century. Quite the opposite: his old-fashioned demeanor, his straightforwardness, his anger, his humor, even his old age - all this seems to turn out to be a particularly impressive register of virtues in this situation. [...] It is these old-fashioned virtues that have made Sam Ervin an idol. "

After his departure from Congress, Sam Ervin worked again as a lawyer and in the literary field. He died on April 23, 1985, leaving behind his wife, two daughters, a son and seven grandchildren.