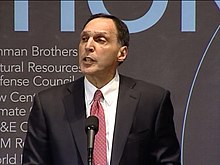 Richard "Dick" Severin Fuld, Jr. (born April 26, 1946 in New York City ) is an American bank manager and was the last chairman and chief executive officer of the investment bank Lehman Brothers . He held his position from 1994 with Joseph M. Gregory as deputy until the company's bankruptcy in 2008.

Fuld was born the son of Jewish descent to his father of the same name and mother Elizabeth Schwab (* 1919) in New York City. He is the great cousin of Oakland Athletics ' outfielder Sam Fuld. Fuld graduated from the University of Colorado at Boulder in 1969 . He received his MBA from New York University ’s Stern School of Business in 1973 . Fuld's first career as a United States Air Force pilot ended abruptly because of a fist fight with his superior. He himself commented that he had "defended a young cadet" who was humiliated by the officer.

In 1969, Fuld joined Lehman Brothers as a securities dealer and quickly became well known within the company for his good work in fixed income . At the age of 37, Fuld was promoted to supervisor in the “Fixed Income” and “ Equity ” departments. Its main role was to oversee all trading operations of the bank. The US-American author and journalist Ken Auletta stated that Fuld was “an extremely successful trader” and that his “skills as a manager [however] were unsatisfactory” : “His interaction with colleagues [was] always dedicated” , so Auletta. "And when [Fuld] talked, everything was very monotonous . " Auletta went on to say that precisely because Fuld was such a gifted trader - especially before the computer - "[the bank manager] [began] to digitize himself and was no longer a human being" . In the early 1980s, Fuld controlled 22 managers from core areas of the bank and was responsible for two-thirds of 1982 profits.

Manager and boss of the bank

After Shearson and Lehman Brothers had been split, Fuld was shared with James Tomilson Hill on the dual leadership of the bank. Fuld promoted a friend and internally controversial employee, Thomas Christopher Pettit , to the management of Lehman Brothers. After the American Express money house was dissolved, an internal crisis broke out in the bank and in its top management. Fuld's "Fixed Income" division was the only core area of ​​revenue for the bank. In April 1994, Fuld was named chairman of the bank, replacing almost all of the team around him. So he also downgraded Pettit, who could no longer convince Fuld with his tactics and previously acted as president of the money house. A few months after his downgrade in April 1996, Pettit was killed in a snowmobile accident. Since the friendship between Fuld and Pettit had broken before the accident, Fuld refused to speak about it in public. Under Fuld's leadership, Lehman Brothers returned 14 percent equity - 11 percent more than in 1995. Finance professor Roy C. Smith of New York University's Stern School of Business called Lehman Brothers "a cat with 19 lives . " Smith compared the financial institution to an accordion : "[...] you can squeeze when you want. [...] You are incredibly flexible. That is also due to Richard Fuld ” .

As chairman of the board, Fuld renewed the bank's management and employees in the three new core areas: "investment banking", "equity" and "fixed income". Most of the money house under Fuld's direction focused on investment banking with high leeway and high income, which he himself called "high-margin businesses". To ensure maximum profits, Fuld hired the most expensive traders and experts. In January 1997, the bank generated $ 48.4 million . Fuld provided $ 46 million of this to pay upper management and left only $ 2 million for Lehman Brothers lower-level employees. During the terrorist attacks on September 11, 2001 , the bank lost its offices in the World Trade Center , just as Fuld's investment banking concept was making huge profits. In an interview with Business Week , Fuld praised the fact that Lehman Brothers was only able to cope with this crisis thanks to the great staff. That same year, Fuld received approximately $ 105 million in compensation, earning him fourth place on the 2001 list of highest paid chief executive officers.

Fuld continued to gain reputation due to his strong personality as a bank manager. In 2004, he implemented an internal agreement that stipulated, among other things, how the company's employees should be remunerated. Now his motto was “remuneration equals income”. Fuld also changed the relationship between wages in cash and shares . In 1994, four percent of Lehman Brothers was owned by employees. Ten years later the percentage rose to 35. A year earlier, Fuld was responsible for the takeover of Neuberger Berman : “Neuberger Berman is one of the largest and most renowned independent asset managers. If Neuberger cooperates with our wealth management , Lehman Brothers will become a market leader for a very desirable trading place. ”Due to his enormous success, Fuld hired his new employees with the sentence:“ If you come to us, we will make you rich - maybe very rich ” . Almost all millionaires now worked for Lehman Brothers.

Bankruptcy of the house

In 2007, Fuld, who self-deprecated his nickname “ Gorilla ” through humor (“I'm the only banker whose arms reach the floor”) and a stuffed gorilla in his office, reportedly made $ 45 million, his earnings in the years 1993 to 2007 are estimated to total up to $ 500 million. During his entire tenure at Lehman Brothers, Fuld is said to have received $ 1 billion in compensation. Similar to the case of Barings Bank , the corporate profits on which the compensation is based were increased through excessive leveraging . Lehman Brothers, under Fuld's leadership, was charged with lending $ 35 for every US dollar of equity. In connection with the massive drop in prices for American real estate, this resulted in many bad loans in 2008 . After the US government had supported three large banks ( Bear Stearns , Fannie Mae and Freddie Mac ) with billions of dollars, political pressure not to absorb more banks had grown so great that the then US Treasury Secretary Henry Paulson asked for the The UK Barclays Bank's refusal to acquire a stake in Lehman Brothers did not provide any further support, which - contrary to the previous principle of Too Big to Fail - led to Lehman Brothers insolvency. A few days after the bankruptcy, only 170 employees were working for Lehman Brothers, 24,988 had been terminated. At the time of bankruptcy, Fuld held 10.9 million Lehman shares, which are said to have been valued at $ 1 billion.

In 2009, Fuld started his own consulting firm called Matrix Private Capital Group. Only ten people reportedly work for the company. The main tasks of Matrix include advising private and business customers on the current economic situation, investments, strategies and risk management. According to his own account, Fuld started the new company because he loves to start new organizations. Critics refer to the company as well as its employees and businesses disparagingly as " Pennystock " and highly speculative.

The bank manager is married to Kathleen Fuld and has three children with her, Chrissie, Jacqueline and Richie. His estimated income throughout his tenure at Lehman Brothers is approximately $ 1 billion. During the public hearings, Fuld protested that at the time of the Lehman Brothers bankruptcy he had lost eight million shares valued at $ 800 million and advised MPs that he had made just under $ 250 million. On November 10, 2008, he signed his property on Jupiter Island off Florida to his wife for 100 US dollars. The purchase price for the property was previously $ 13.75 million. The top manager also owns a property in Greenwich that is said to be valued at 10.8 million US dollars. Fuld tried a buyer for his holiday home in Sun Valley , which has a total value of 27 million US dollars to find and sold previously his penthouse on Park Avenue for 26 million US dollars. Fuld also owns an art collection with his wife valued at $ 20 million.

Due to Lehman Brothers' enormous profit increases, which in retrospect were associated with incalculable increases in risk, Fuld became a member, partly on a voluntary basis, in numerous institutions. Before Lehman Brothers announced bankruptcy, Fuld served on the board of directors of the Federal Reserve Bank of New York for some time . After the financial institution closed, Fuld stepped down from the board of directors of the Robin Hood Foundation . Furthermore, Fuld was a member of the Board of Trustees at the New York Presbyterian Hospital , a member of the World Economic Forum and the Business Council.

In 2009, Fuld was portrayed by Corey Johnson in the BBC film " The Last Days of Lehman Brothers " . In the same year the BBC aired a documentary about the bank's case. Main focus was also on Fuld, his business practices and biography. A year later, the bank manager appeared in the Oscar- winning documentary Inside Job . Also in 2010, the Arab news channel Al Jazeera broadcast the educational program Meltdown: The Men Who Crashed The World . In the film, Fuld is described as "the cruel Wall Street robber". In 2011, Fuld was portrayed by James Woods for the HBO release Too Big to Fail . In the same year the film The Big Crash - Margin Call was released . The character "John Tuld" is based on Fuld and was played by Jeremy Irons .