The church was probably built in the 8th century, possibly a little earlier. The church was named as a diakonia at the end of Pope Gregory II's pontificate . It is also mentioned in some documents from the 10th and 11th centuries, where it is mentioned as “in platana” (between the plane trees ), which refers to the trees in the garden of the holy martyr Eustance. The Emperor Constantine I had built an oratory on the same site . This church was called " ad Pantheon in regione nona e iuxta templum Agrippae " (at the Pantheon in the IXth quarter and near the temple of Agrippa).

The church was restored and a campanile was built next to it. At the end of the 12th century during the pontificate of Pope Celestine III. (1191–1198) the relics of the saint were deposited there. In the 16th century the church was Philipp Neri's preferred place to pray. It was completely rebuilt in the 17th and 18th centuries. Only the campanile remained from the old church. The church was built in the Roman Baroque style. The architects Cesare Corvara and Giovanni Battista Contini (1641–1723), who added chapels and the portico , Antonio Canevari (1681–1750), Nicola Salvi (1697–1751) and finally from 1728 Giovanni Domenico Navone carried out the work. The new altar was designed in 1739 by Nicola Salvi from bronze and multicolored marble and Ferdinando Fuga built a canopy over it in 1749 . The choir and sacristy were designed by Canevari and built by Giovani Moscati.

In 1918 the church was elevated to a minor basilica.

The facade, built under the direction of Cesare Corvara († 1703) and with the help of other architects, consists of two sections, with the upper part set back a little. The lower part has four pilasters and two columns , all with an Ionic capital and a small deer head in the middle. The spirals of the volutes are connected with small laurel wreaths. On the right side a plaque was placed in memory of the Tiber flood, which reached as far as the basilica, in 1495.

The upper section is divided by four pilasters with a large spiral on each side. Above is a triangular pediment with circular windows in the middle, surrounded by palm branches and overlooked by a crown. A deer's head on the gable carries a cross between the antlers.

The square Romanesque campanile is on the left at the rear of the church. It was built in 1196. The lower part is older and is dated to around 1090.

The nave has a cruciform floor plan . It was executed by Cesare Corvara and Antonio Canevari in the high baroque style. The nave is framed on each side by three pilasters adorned with fluted white marble and finished with composite capitals . 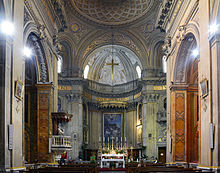 The rib vault is decorated with flowers and leaves. The Holy Spirit is depicted at the intersection of the dome.

The high altar was commissioned by Cardinal Neri Maria Corsini from the architect Nicola Salvi. The altar is made of an elegant and refined synthesis of marble and gilded metal. The altar plate rests on a porphyry vessel with the relics of St. Eustachius. Francesco Ferdinandi (1679–1740) painted the altarpiece in 1727, which is called l'Imperiali . It depicts the martyrdom of Saint Eustachius and his family who were boiled to death in a bronze bull sculpture in 118 with boiling water. The gilded wooden canopy was made around 1747 by Ferdinando Fuga (1699–1781).

The rear of the church is completely occupied by the organ, which was built by Johann Conrad Werle in 1767. The gilded balustrade and the wooden front of the organ were made in the Rococo style by Bernardiono Mammucar, Francesco Michetti and Calo Pacilli. The repentant Magdalena by Gabriel and Lois gesta di Tolosa from the last decade of the 19th century is shown in a glass window above the organ .

The pulpit was made from multi-colored marble in 1937. 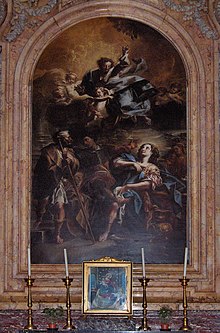 For the other titleholders see: List of Cardinal Deacons of Sant'Eustachio