The title of this article is ambiguous. Further meanings are listed under Schlesier (disambiguation) . 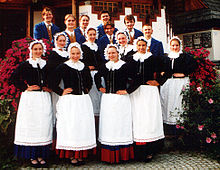 A Silesian ( Polish Ślązacy ; Silesian Schläsinger ; Schlonsakisch Ślůnzoki ; Czech Slezané ) is a person of German , Austrian , Polish or Czech nationality who comes from the Silesia region and the former Austrian Silesia .

In the second half of the 2nd millennium BC The late Bronze Age Lusatian culture existed in Silesia , which cannot be clearly assigned to any ancient ethnic group . At the turn of the times, Silesia was populated by the Vandals immigrating from the north , the main tribes of which were the Hasdinger , Lugier and Silinger . Roman authors of this time included these peoples in their reports on the Magna Germania . Archaeological finds testify that Celts were also at home in this area in pre-Germanic times . Later sites show that Celtic and Germanic cultural styles merged. Most of the Vandals withdrew in the course of the migration towards the south, with many clans remaining in Silesia. The advancing Slavs initially lived next to the remaining Vandals. Here, too, archaeological sites testify that both peoples have merged with one another. Places of major armed conflict are not known.

After antiquity, the rulers changed. At first, Silesia belonged to the Great Moravian Empire , but was then ruled from Bohemia by Duke Boleslav II, appointed by the German Emperor . Around 990, Silesia came to Mieszko, the first Duke of the Polans and also a vassal of the German Emperor Otto III. The country was very sparsely populated, and after four fifths of the population had perished in the Mongol storm, the Silesian Piasts tried to recruit German colonists in the 13th century, so that until the Germans were expelled in 1945–1947, the largest part in Lower Silesia and Upper Silesia a not inconsiderable part of the areas had a German majority. With the annexation to the Crown of Bohemia in 1348, Silesia became part of the Holy Roman Empire .

Large parts of the population in Lower Silesia joined the Reformation. In Upper Silesia, where the border between the peoples was fluid, the majority of German and Slavic Silesians remained Catholic. Since the Silesian Wars , most of Silesia has belonged to the Kingdom of Prussia and since 1871 to the German Empire . During the time of the Empire, the German and Polish or Silesian languages ​​were widespread in Silesia; German was generally spoken in Lower Silesia, and the population in Upper Silesia was bilingual (German and Silesian).

From 1922 to 1939, Eastern Upper Silesia, separated from the German Reich, was part of Poland as the Autonomous Silesian Voivodeship . After a referendum in 1921, only a few German-speaking Silesians remained there. According to the 1931 census, the population there was 1,533,500, of which 92.3% of the population stated the Silesian-Polish dialect Schlonsakisch as their first language, Polish and Silesian dialects of Polish as a second language and 7% German as their mother tongue . Shlonsak was (and is) spoken only in Upper Silesia and the extreme north-eastern edge of Lower Silesia, while Lower Silesia, which is now Polish, was purely German-speaking with the exception of tiny Czech language islands.

More Silesia arrived in 1950 as emigrants or after 1990 as repatriates in the Federal Republic. To the west of the Oder-Neisse border , in the Görlitz area, they make up the majority. They are also displaced from their homes in the diaspora .

Czech Silesians live mainly in Czech Silesia . The share of the Silesians in the total population of the Czech Republic is around three to five percent today. There were Czech language islands in Silesian territory. a. also at Wartenberg , Strehlen , Glatz and based on the rest of the Czech language area between Leobschütz and Ratibor . Some Czechs came to Upper Silesia from Bohemia as religious refugees and mostly settled in colonies. Some of these were expelled after 1945 or had to move to Czechoslovakia as so-called repatriates .

Silesians speak or spoke German or its Silesian dialects , Polish and the Silesian-Polish dialect , as well as Czech or Lachish as a Czech-Polish transition dialect.

(Upper) Silesians as a nationality

There is also a group of Upper Silesians in Poland who do not feel they belong to either German or Polish nationality. This was particularly evident in the 2002 census , when 173,200 citizens first indicated the unrecognized term Silesian as their nationality. In the 2011 census, a total of 817,000 citizens stated to be of Silesian nationality or / or to be Silesian. In 2002, 140,895 people (over 92% of the total) in the Voivodeships of Opole , Lower Silesia and Silesia stated their German nationality . In 2011 there were 26,000 people across Poland who referred to themselves exclusively as Germans, 23,000 who saw themselves primarily and 61,000 who saw themselves as Germans secondarily - alongside another nationality. As with other national minorities, the Silesian group of people can vary in size depending on the type of question (“predominantly Silesians” or “also Silesians”, understand or master Polish Silesian, understand or master German Silesian). It should be noted that the term “Silesia” or “Silesian” in everyday language is only applied to Upper Silesia or Upper Silesia. The discussion about a Silesian nationality has no impact whatsoever on the German self-image of the almost completely expelled Lower Silesians or Poles who have settled in Lower Silesia and define themselves as Polish Lower Silesians in the regional sense.