Esterházy Palace , also called Fertőd Palace and often referred to as Esterháza in Austria to distinguish it from the Eisenstadt family palace , is a western Hungarian palace owned by the earlier Esterházy princes . It is located near the Austrian border, a few kilometers southeast of Lake Neusiedl , in a fertile plain on the outskirts of the town of Fertőd (Fertő-tó = Lake Neusiedl).

It is one of the largest rococo castles in Hungary, is part of the world cultural heritage and at the same time is part of the Fertő-Hanság National Park . It can be reached from the west via Eisenstadt ( Burgenland ) or Sopron (Ödenburg) (25 km) or from the north via the Austrian Seewinkel east of Lake Neusiedl (Pamhagen 10 km), from the east via the Hungarian district town of Kapuvár (15 km). The Grenzland cycle path around Lake Neusiedl leads directly past the castle park .

The main building of the castle form a three-wing system with rounded connection of the side wings, so that a hoof-like structure is created. Farm buildings are attached to the side wings, arranged in a semicircle and interrupted by the wrought-iron main portal of the complex. The resulting castle courtyard has an area of ​​over 7000 m². It is adorned by geometrically laid out lawns and flower plantings. In the middle there is a fountain with a dragon-killing scene.

While the farm buildings are single-storey, the main buildings have two upper floors. The central building with eleven window axes has a three-axis central risalit , which is surmounted by another floor, the Belvedere . A two-armed fixed staircase decorated with putti leads to the balcony in front of the rooms on the first floor, supported by columns .

The rounded transition parts have seven, the adjoining side wings thirteen window axes. All windows on the upper floors have small decorative balconies and rococo decorative elements. All facades are structured by pilaster strips and have balustrades , some of which are crowned by figures and other architectural decorations . The side wings have three-axis balconies supported by columns in the middle of the first floor, under which there are fountains.

At the end of the side wings, the outward-facing single-storey tracts adjoin the farm buildings, the former winter garden to the east and the picture gallery to the west.

The middle building contains the Sala terrena on the ground floor , a one-story hall with several pillars supporting a vault decorated with ceiling frescoes . With its direct access to the park, it serves as a refreshment room in summer, but with its floral rococo stucco it also has the character of a winter garden. On the floor above are the State Hall and the Haydn Hall, each of which extends over two floors. The state hall, which is equipped with numerous mirrors, shows ample gilded Rococo ornamentation and a ceiling painting by Josef Ignaz Mildorfer (1719–1775) depicting the triumph of Apollo . In the corner niches, the life-size mythological figures Flora , Ceres , Diana and Boreas made of painted limestone by the Viennese sculptor Johann Joseph Resler (1702–1772) symbolize the four seasons. The walls of the neighboring Haydn or Music Hall are made of white and pink artificial marble. The gilded wall stucco shows putti with multi-armed candlesticks. Two large faience ovens face each other. Joseph Haydn (1732–1809) gave concerts here with his court orchestra for over two decades .

The rooms adjoining the central rooms were organized in such a way that those of the ladies followed on the east side, the princess's apartment on the ground floor and a sovereign one on the upper floor, for example for the visit of the queen. To the west, the equivalent of the gentlemen followed. The families related to the prince lived in the more remote rooms of the side wings. Today's furniture is no longer the original. The castle chapel is located in the western part of the arch. It has an oval base and there are galleries on the first and second floors. The ceiling fresco in the dome, like that of the ballroom, was designed by Josef Ignaz Mildorfer. The dome has a skylight that leads into a small tower, which marks the location of the chapel to the outside.

Park and other buildings

The castle is surrounded by a park on three sides, except to the north. In the 18th century, the baroque park with statues and strictly geometrically arranged flower beds extended to the south. The three lines of sight from the center of the main building are still there today as paths. They are lined with geometrically shaped shrubs, which are also distributed as spheres or pyramids in a geometrical arrangement on the now large meadow. The strict shape of the plants and their arrangement make reference to the baroque past. The only figure in this part of the park is a recent bronze sculpture by Joseph Haydn, who seems to be rushing to his client with a bundle of notes. The visual axis paths are around 1.7 km long, but today only lead through forest in the more distant parts. The parts of the park to the east and west of the castle are designed in the English style .

In the heyday of the palace, the opera house stood on the west side of the park and the puppet theater on the east side. There is nothing left of the opera house, which burned down in 1779 and was rebuilt after two years. The puppet theater, which has been rebuilt several times and used for other purposes, has been used as an event hall after its reconstruction. The so-called “small castle” is attached to the puppet theater, a one-storey U-shaped building that was formerly used for the estate administration and is now intended for offices as well as rooms and rehearsal rooms for participants in music courses. Other park structures such as fountains, temples and Chinese pavilions no longer exist.

An exception is the somewhat remote, about 700 meters from the castle and restored pavilion in the form of an octagon with the name Bagatelle . It was specially built for the visit of Maria Theresa (1717–1780) and was named after Nicholas I's answer to Maria Theresa's question about the construction costs, which he described as a bagatelle for himself.

In the two former houses of the castle guard opposite the main gate with their seven-arched arcades, there are now restaurants, and the former residential complex for the musicians of the court orchestra at the former eastern end of the park area now serves as Fertöd's town hall and houses a Haydn memorial room and a music school a library. 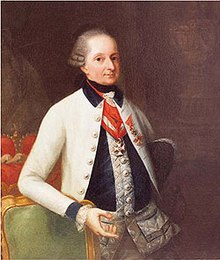 Prince Michael Esterházy (1671–1721) had built a small hunting lodge at the site of the later palace at the beginning of the 18th century . After Nikolaus I (1714–1790) had become head of the family after the death of his older brother Paul II Anton (1711–1762) and had received the title of prince, he had the hunting lodge converted into a large, magnificent summer residence.

Drawing for the former opera house

The plans came from the Viennese court builders Johann Ferdinand Mödlhammer († 1767) and Melchior Hefele (1716–1794). Material for the stone carving came mainly from the quarries in Kaiserstein and St. Margarethen , the latter belonging to the Esterházys. The main part of the construction work took place between 1763 and 1766. But there was also further construction work after that.

The royal family's need for representation was expressed in the very self-confident architecture as well as in the interior design of the palace. Similarities with the imperial summer residence at Schönbrunn Palace in Vienna are no coincidence. B. the similar middle stairs to the main floor in the main wing. The Habsburgs, in turn, had Versailles as a model for Schönbrunn , which Nicholas I had also visited. Esterházy Palace is therefore also known as the "Hungarian Versailles".

In his summer residence Nicholas I developed a splendid, expensive life with opera and theater performances, balls, hunts and celebrations of various kinds. Joseph Haydn, who composed numerous works for the opera house, was responsible for the musical side as director of the court orchestra. Concerts took place in the castle. In 1772 Haydn's later very popular “Farewell Symphony ” was premiered, in which the orchestral musicians whose part has ended leave the stage until only two violinists have finished. The archduchess of Austria and Queen of Hungary Maria Theresa was among the numerous guests of the palace, mostly belonging to the nobility . The castle was guarded by over 150 bodyguards, and there was space for 110 horses in the stables. Nicholas I earned the nickname "the splendor lover".

After his death, his heir Anton I and his successor left the castle because of the debts that had accrued and dissolved the court. The building and park fell into disrepair. It was only 100 years later, around 1900, that Nicholas IV (1869–1920), when he had overcome the family's financial crisis, was able to start revitalizing the palace. Eventually the family and the children moved into the renovated castle.

The Second World War and its outcome put an end to this. After war damage, the plant, like other Esterházy property in Hungary, was expropriated by the state after 1945. And decay began again. The renovation of the castle began in 1959 and was intensified again by an EU project from 2009.

Today the middle part of the castle can be visited as a state museum . In one side part there is a horticultural college and a commercial school that cooperates with the Austrian commercial academy Frauenkirchen . Teachers from both countries teach bilingual in the schools.