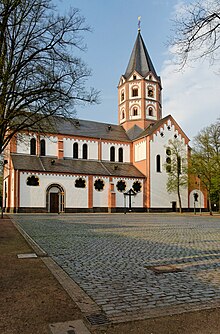 St. Margareta in Duesseldorf-Gerresheim, from the south

The women's community St. Hippolyt in Gerresheim was founded in the last third or towards the end of the 9th century , developed into a noble women's foundation and was abolished in 1803 .

The women's community in Gerresheim began as a foundation of the Franconian nobleman Gerricus towards the end of the 9th century, then came the Hungarian invasion of Gerresheim (probably 919) and the transfer of the independent church to the Archbishop of Cologne (922), and finally the difficult time the consolidation and reconstruction, which came to a preliminary conclusion with the consecration of a new church (970) and the confirmation of the Gerresheim customs (977) by Emperor Otto II (973–983). In the 11th century, the community may have been temporarily connected to the women's community in Essen under Abbess Theophanu (1039-1058) , but details are missing. Only the Theophanu will and a donation note indicate this.

Gerresheim's connections to the St. Ursula women's community at the gates of Cologne also existed up to the high Middle Ages; the Cologne institution was created after the escape of the Gerresheim sanctuary as a result of the Hungarian catastrophe. For the 12th century there is an abbess, Heizzecha, who, as head of St. Hippolytus and St. Ursula, complained to the Archbishop of Cologne about the attacks by the Gerresheim bailiffs (1107). The Gerresheim abbess Hadwig von Wied (from 1150) was also head of the Essen women's community (1150-before 1176?) And founded a women's community at the Schwarzrheindorf chapel donated by her brother, Archbishop of Cologne Arnold II (1151-1156) .

The high Middle Ages saw an economically and religiously stable community, as reflected in the land register written at the instigation of Abbess Guda (1212-1232) or in a liturgical ordo from the second half of the 14th century. In 1236 the collegiate church, a late Romanesque basilica with the current name Basilica of St. Margareta , was completed and consecrated. It is doubtful whether the famous Cistercian monk Caesarius von Heisterbach (1180–1240) mentions Gerresheim in his miracle stories.

From the year 1056 the name Adolf is listed as Vogt of the Gerresheim monastery. It stands to reason to see in him the ancestor of the Bergisches Grafhaus, who at the same time was Vogt of Werden Abbey , who called themselves hereditary bailiffs of Gerresheim when Gerresheim was raised to freedom in 1368.

In the 13th century, the women's monastery, guarded by the Bergisch counts, became increasingly dependent on these secular territorial lords; The women's community and the manorial rule of Gerresheim became part of the Bergisch regional rule.

This also brought about fundamental changes in the area of ​​the judiciary, which had previously been shaped by the pen. The bailiff of the monastery not only had to ensure his protection to the outside world, but also, as a judge, to ensure that the law within the monastery properties was observed. The collegiate court met three times a year under his chairmanship within the monastery area. In addition to the Vogteirecht, the abbesses of the Gerresheim monastery had set up a mayor's court in Gerresheim, which was responsible for minor legal cases, the chairman of which they were free to choose and which they occupied with a member of the Bergisch knighthood from close by. In 1363, Count Wilhelm von Berg confirmed the abbess the right to freely determine the mayor. After Gerresheim was elevated to the city, the mayor's court became the city court, which had to seek consultations in Ratingen . From 1435 at the latest, the mayor of the mayor was no longer the judge of the Mettmann office as chairman of the jury in Gerresheim, who was responsible for legal cases within the city.

At the same time, Gerresheimer Markt and Zollstelle developed into a merchants' and craftsmen's settlement, which was elevated to a (Bergisch rural) town in 1368 and increasingly pushed the pen to the edge. The Gerresheimer history of the end of the Middle Ages and the beginning of the early modern period is therefore predominantly urban, such as the construction of the city wall (15th century, 1st third), the urban Katharinenkonvent (before 1450), the Quadenhof as an open house for the Duke of Jülich-Berg (1459) or the municipal police regulations from 1561.

Over the centuries the monastery buildings were destroyed several times by fires. During the city fire of 1568, the fire spread so quickly that some members in the monastery were unable to escape in time and died.

At the beginning of the Reformation in the German Empire, the situation of the women's foundation deteriorated significantly, both personally and financially. In addition, the members of the monastery rarely stayed in the facilities, as a foreign residence was preferred. Because of the absence of the canonesses, most of the religious services had to be performed by vicars.

When in 1565, after the death of the incumbent abbess “Anna von Lohberg”, the previous “waitress of the foundation”, Felicitas Countess von Eberstein, took over the successor, the number of members of the monastery was already greatly reduced. In 1502 the monastery had 36 members, under Anna there were only five canonesses and they no longer lived in the monastery. The successor had to promise that in addition to the abbess at least four canonesses should belong to the monastery and that both the abbess and the canonesses would choose their place of residence in the monastery. However, both commitments were not kept. In 1574, at the instigation of Duke Wilhelm the Rich, the papal nuncio "Caspar Gröpper" checked the situation in the monastery. Because of the very negative result, Felicitas had to promise improvement and the search for new canons. But this time, too, this promise was not kept.

In the confusion of Archbishop Gebhard Truchseß von Waldburg's conversion to the evangelical faith (1582) and the Truchsessian War , Gebhard's marriage to Gerresheim's canon Agnes von Mansfeld fell . During this war, the sanctuary of St. Quirin in Neuss became homeless and, at the instigation of the sovereign, found a new home in the Niederberg monastery (1585). However, Felicitas initially blocked the refugees from entering the buildings of the monastery by locking them out. After negotiations, she gave admission and abdicated as abbess while granting a pension. The Gerresheim community, which had only been accessible to women from the high nobility since the later Middle Ages, was also open to inmates from the lower nobility from 1587, which was confirmed by the papal side in 1594.

Little is known about the conditions in the monastery during the 17th and 18th centuries. The community was probably affected during the Thirty Years' War (1624), but also subsequently had a sufficient economic basis to ensure the supply of the few canons and canons. After a fire in the monastery in 1751, the financial situation was already so tense that it was only possible to rebuild it with the help of a temporary collection approved by the Archbishop of Cologne.

The economic basis of the Gerresheimer women's community in the Middle Ages and early modern times were the possessions as they are handed down in the abovementioned land register from the time of Abbess Guda. Thereafter, the monastery had twelve Fronhöfe , three of which were assigned to the abbess and the remaining nine to the convent . The abbess's fron yards were the cattle yard in Gerresheim, a yard in (Duisburg-) Rheinheim and the Mintarder Hof (on the Ruhr near Essen-Kettwig), yards of the convent of the Derner Hof near Gerresheim, (Düsseldorf-) Hubbelrath , (Wuppertal- ) Sonnborn , Hösel (now in Ratingen), Erkrath, Eppinghoven (near Neuss), Keldenich (near Wesseling), another farm in Rheinheim and Gyffertheim (cannot be precisely located, but located near Dinslaken). The self-managed Fronhöfe with their Salland were subordinate to a number of farms from the loan country. Dependent farmers worked these hooves with their families, of which the pen owned a total of 264. The upper court of all Fronhöfe was the Derner Hof; this is where the fees for the pen came together. This manorial structure was to change in the course of the late Middle Ages to a rented manor.

The parish churches in Linz, (Mülheim-) Mintard and ( Duisburg-) Meiderich, incorporated in the course of the 13th and 14th centuries, also generated income .

The originally large fortune of the monastery decreased more and more after the 16th century. In the second half of the 18th century, in addition to other income, only 41 hooves were subject to tax and the income that could be achieved through this was low. With the approval of the Archbishop of Cologne, these performances of the hooves were sold in 1780. With the proceeds only a small farm in Hubbelrath could be bought. This new farm was leased in 1804 for 225 Reichsthalers.

The Gerresheimer Stiftskirche is well worth seeing with the late Ttonian wooden crucifix (early 11th century), with reliquary containers and monstrances as well as with a late Romanesque altar canteen and the High Gothic Gerricus sarcophagus. The “ Hidda Codex ”, which may be attributed to Abbess Ida from Cologne, comes from the collection of the monastery , a liturgical ordo from Gerresheim is attributed to the second half of the 14th century. The main state archive in Düsseldorf keeps 490 documents and 258 files from the Gerresheimer Stift.