Metternich was the name of two widely ramified noble families from the Rhineland , both of whose ancestral seats were in the village of Metternich . One family had three black seashells on a silver background in their coat of arms and had their ancestral seat at Haus Velbrück in Metternich, the other had a silver lion on a red and gold striped background and sat on the moated castle in Metternich. Both coats of arms are now combined in the Metternich coat of arms. The two sexes were of different tribes.

The von Metternich family with the shell coat of arms produced a number of bishops and archbishops . In the 17th century, various of its branches were elevated to the status of barons and counts of the Holy Roman Empire . From 1652, one line ruled the dominions of Winneburg and Beilstein directly and thus belonged to the high nobility . In 1803 she rose to the rank of prince. Its best-known representative was the Austrian State Chancellor Klemens Wenzel Lothar von Metternich . With Paul Alfons von Metternich-Winneburg (1917–1992), the male line died out.

The Wolff-Metternich zur Gracht do not belong to this sex, but were named after the marriage of an heir Metternich into the Hessian Wolff von Gudenberg family .

The von Metternich family with the shell coat of arms was originally a branch of the Middle Rhine noble family von Hemberg with its headquarters in Hemmerich near Bonn. This had its origin in the ministeriality and eventually exercised the hereditary office of the treasurer of the archbishopric of Cologne .

A branch of the von Hemberg family named itself after the place Metternich since the 13th century . There were two castles in Metternich. The seat of the Hemberger Metternich (with the shell coat of arms ) was the now destroyed house Velbrück , so named because it fell to the von Velbrüggen family through marriage in 1545. The other castle, the Metternich moated castle still standing today, was the ancestral seat of the Metternich with the lion coat of arms (see below). Between the two estates, whose courtyard areas are adjacent, the Swist runs in an east-west direction and the Roman road from Trier to the Rhine near Wesseling runs in a south-north direction.

After various lines had already expired before, there were still seven lines in the 16th century. These included:

Of these, the princely, Winneburg line was the last to go out in 1992.

Dieter von Metternich zu Zievel came into possession of the lordship and Burg Bourscheid in Luxembourg through marriage in 1494 . His grandson of the same name († 1600) was also Mr. von Mersch and Esch-Sauer .

His grandson Wolfgang Heinrich († 1699) bought Dodenburg , Neckarsteinach and Densborn . Linked to this was the Hereditary Marshal's Office of the Duchy of Luxembourg . His brother Lothar Friedrich was (1617–1675) Prince-Bishop of Speyer and Worms and Archbishop and Elector of Mainz. Through this, the Metternich family was in possession of the office of hereditary treasurer of the Electorate of Mainz.

With Lothar von Metternich from a branch that resided at Vettelhoven Castle , the family provided the Archbishop of Trier. In 1652 the acquisition of the imperial dominions Winneburg and Beilstein on the Moselle was made possible. Her possession led to the award of the title of count to this line in 1679, with a seat and vote in the Lower Rhine-Westphalian Imperial Counts College .

The nephews of Lothar Johann Reinhard von Metternich, Karl von Metternich and Emmerich von Metternich, all in high ecclesiastical offices, were supporters of the Habsburg opponents of the French-minded Archbishop of Trier Philipp Christoph von Sötern .

The Imperial Quartermaster General Lothar von Metternich and his brother Wilhelm acquired the rule of Königswart in Bohemia in 1623/30 . They also bought the Metternichschen Hof in Koblenz .

Wilhelm's eldest son, Karl Heinrich von Metternich-Winneburg , became Archbishop of Mainz and Prince-Bishop of Worms in 1679. The younger son Philipp Emmerich († 1698) was raised to the rank of count.

As compensation for the possession of Winneburg-Beilstein on the left bank of the Rhine, which was occupied in 1794 and fell to the First French Republic in 1801 , Franz Georg Carl Graf von Metternich-Winneburg (1746-1818, father of the famous Austrian State Chancellor Klemens Wenzel ) received the former imperial abbey of Ochsenhausen and the primogenic title in 1803 a prince of Ochsenhausen directly from the empire , while the other family members remained counts and countesses. However, the principality fell to the Kingdom of Württemberg as early as 1806 as a result of mediation , and in 1825 it also acquired the former monastery properties there from State Chancellor Metternich.

In 1813, the Austrian State Chancellor Klemens Wenzel Lothar (son of Count Metternich-Winneburg, who was raised to Prince of Ochsenhausen in 1803) was granted the unlimited hereditary Austrian prince status with the title of Prince of Metternich-Winneburg (i.e. apart from the respective first-born, the Prince of Ochsenhausen as heir all the other children were no longer just counts and countesses, but princes and princesses of Metternich). In 1818 he was also elevated to the position of Duke of Portella in Sicily . The State Chancellor and his family lived in Vienna in the Palais Metternich, which he had acquired and converted . In 1816 he received Johannisberg Castle in the Rheingau , a secularized monastery with a famous winery, from Emperor Franz I of Austria as a donation . It became the family's summer residence. In 1826 he bought in Bohemia, where he owned the royal castle he had inherited, and the abolished Plaß monastery near Pilsen. There he had a family crypt built, where he was buried in 1859. Since then, the monastery has also housed the princely family archive. Königswart and Plaß remained in the possession of the Princes Metternich-Winneburg, who also lived there, until they were expropriated in 1945.

Richard Klemens 3rd Prince von Metternich-Winneburg was a hereditary member of the manor in the Austrian Imperial Council from 1861. He was married to his niece Pauline von Metternich , b. Countess Sándor, the daughter of his half-sister Léontine.

Since the marriage had produced three daughters, but no son as ancestor, the title passed to his half-brother Paul von Metternich (1834–1906) after the death of Prince Richard Klemens. He was followed as prince by his son Klemens Wenzel (1869–1930).

His son was Paul Alfons (1917-1992). In 1945, after the end of the war and expulsion from Czechoslovakia, with the simultaneous expropriation of the property there in Königswart and Plaß, he and his family took up residence at Johannisberg Castle in the Rheingau, which had been in the family since 1816 but was destroyed in the war . He rebuilt the castle and the associated winery with his wife, but sold both to the Oetker Group in the late 1970s . He was, among other things, Großbailli of the Großballei Deutschland of the Order of Lazarus , racing driver, president and later honorary president of the Automobile Club of Germany (AvD) . With him, the von Metternich family died out in the male line. His wife Tatiana von Metternich-Winneburg was a patron, painter and writer.

The Metternich represented an important family of the nobility in the Holy Roman Empire . Since the 16th century there were representatives in the cathedral chapters of Mainz , Worms, Speyer, Münster, Liège and Bamberg. However, it was not represented in the highly aristocratic and noble Cologne cathedral chapter . But they also sat in various monastery chapters, for example in Bonn , Maastricht , Mainz , Münstereifel and Xanten . The Metternich family was represented in the Trier cathedral chapter between 1547 and 1778 without interruption. From 1648 a total of 137 family members were canons of a bishopric . There were also Knights of the Maltese and Teutonic Order as well as members of other church orders . Female family members belonged to a number of monasteries and foundations. Among these were several abbesses and prioresses. 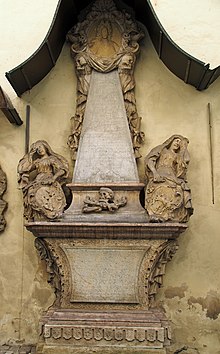 The founder of the Chursdorf line (today: Mostkowo near Barlinek ) in Brandenburg (Neumark) was Johann Reinhard Freiherr von Metternich. This converted to the Protestant faith and was administrator of the Halberstadt monastery. Of his four sons, two sons died as soldiers, Karl Ludwig von Metternich in 1675 at Fehrbellin and Karl von Metternich in 1689 during the siege of Bonn . The third son, Ernst von Metternich (* 1657 † 1727) and count since 1697, was the Prussian Privy Councilor of State and was sent to Regensburg in 1690 as an envoy to the Perpetual Diet . There he met the exile daughter Anna von Regal zu Kranichsfeld (* 1670 † 1737) and married her. In Vienna at the imperial court he negotiated the bestowal of the royal dignity to the elector Friedrich III. of Brandenburg . His eldest son, Ernst Eberhard von Metternich (* 1691 † 1717), negotiated successfully with his father in Switzerland in 1707 about the acquisition of the Principality of Neuchâtel for Prussia and was appointed his father's envoy to the Reichstag in Regensburg in gratitude for the success. The father Ernst von Metternich acted from 1713 as envoy to the peace negotiations in Utrecht . His son and fellow envoy Ernst Eberhard died in July 1717, only 27 years old, in Regensburg and was initially buried in the envoys' cemetery without a memorial. His sister Eleonore (* 1692) married her mother's cousin, Maximilian Ludwig von Regal zu Kranichsfeld (* 1668 † 1717), in Regensburg in 1708. This son-in-law of his father and envoy Ernst von Metternich also died in the same year during the siege of Belgrade , only shortly after the older son Ernst Eberhard had died in July 1717. Most recently, the younger son Ernst August von Metternich (* 1694 † 1720) died in 1720, also young like his older brother. Seven years later, at the end of December 1727, his father Ernst von Metternich died in Regensburg after converting to Catholicism the day before his death without the knowledge of his wife, but with the knowledge and help of his daughter Eleonore. The conversion caused a sensation and resulted in many pamphlets, because the deceased Prussian ambassador was buried with much pomp in the Catholic monastery church of St. Emmeram and a large epitaph with an inscription that provoked the Protestants was erected there. His wife was so outraged about her husband's conversion and about the epitaph that had been erected for him in a Catholic church that in 1728 she had an epitaph built for her son Ernst Eberhard, who died eleven years ago, in the envoys cemetery next to the Protestant Trinity Church . She also published a pamphlet in which she described her view of the events. The inscriptions on the two epitaphs of father and son document the religious dispute in the Chursdorf line.

The last living brother of the envoy Ernst von Metternich, Wolf von Metternich, Ansbachischer and Bayreuth secret council, was also Reichstag envoy in Regensburg and from 1726 Chancellor in the Principality of Schwarzburg. He also emerged as a theosophical-alchemical author. When he died unmarried and without children in 1731, the Chursdorf line of Metternich had died out.

The family coat of arms shows three (2: 1) black shells in silver. On the helmet with black and silver blankets, a silver gooseneck. 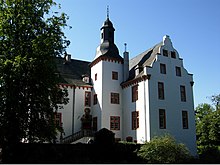 The von Metternich family with the lion coat of arms was a branch of the von Alfter family . On Castle Alfter they were first in 1117 as lords de Halechtre mentioned and were from 1188 Erbmarschälle of the Electorate of Cologne . After the acquisition of the moated castle in Metternich, which still exists today, the branch there called itself von (and zu) Metternich and was first mentioned as such in 1316. The castle remained in this family until it was sold in 1692.