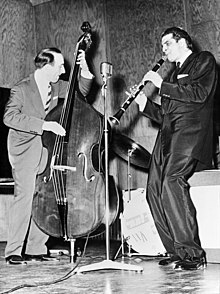 Scott was born the son of Sicilian immigrants in New Jersey, sang from the age of seven and enjoyed success as an instrument imitator. He studied at the Juilliard School in New York from 1939 to 1942 , then with the composer Stefan Wolpe . He soon found jazz, was impressed by the ballads Ben Webster and the improvisations Dizzy Gillespies and Charly Parkers ("He is my idol") . In 1941 he took part in the bebop sessions in Minton's Playhouse. During his three years of military service he played in big bands , swing formations, but also Dixieland bands . Until 1953 he played as clarinetist, saxophonist and pianist with Buddy Rich , Ben Webster, Sid Catlett , Trummy Young , Earl Bostic , Charlie Ventura , Claude Thornhill and Duke Ellington .

From 1953 he led his own groups, but also accompanied Harry Belafonte , Billie Holiday and Sarah Vaughan , for whom he also arranged. He specialized in the clarinet, won the Down Beat Poll four times and cemented his reputation as an important new representative of the instrument. He was at the core of the New York jazz scene; he was said to have "the most powerful sound of all clarinetists". In 1957 he was on tour with his band for seven months (Europe and Africa). In 1959, Scott left the United States to live and work in the Far East for the next six years.

He played with musicians from the host countries in Japan, Indonesia, Thailand and South Vietnam, but was also active as a jazz teacher. He recorded the classical music of these countries and performed at the first Hong Kong jazz festival in 1961 and at the first Japanese jazz festival in 1962. In Bali he performed in temples with a gamelan orchestra; in Japan in 1964 he played the record Music for Zen Meditation with Hōzan Yamamoto on the Shakuhachi and Shinichi Yuize on the Koto , which is one of the first ethno-jazz productions and became a bestseller . This album made Scott, the pioneer of world music , known beyond the jazz scene.

Incidentally, his trio emerged from his quartet with Bill Evans.

In 1965 he returned to New York City , where he directed a jazz quartet that incorporated elements of ethnic music into its playing and performed at the Newport Jazz Festival . In 1967 he recorded a record of Indonesian-influenced jazz with the Indonesian All Stars around Bubi Chen , on the one hand, and on the other hand, he developed Indian-influenced jazz music with sitar and tabla player Collin Walcott and recorded the album Music for Yoga Meditation and Other Joys with him and in 1969 the album Homage To Lord Krishna , on which Attila Zoller and Richard Davis were also involved.

In the 1970s Scott went to Italy and settled in Rome in 1972, where he lived until his death and initially worked with the pianist Romano Mussolini . In the early eighties he presented an impressive musical study of Billy Strayhorn's composition Lush Life as a double CD, which he recorded in different constellations (including with Bill Frisell and Ed Schuller , but also with his daughter, Monica Sciacca) and on various instruments interpreted. In the late 1980s he dealt with electro-acoustic soundscapes. In the 1990s he performed regularly with jazz combos and a big band and made various records.