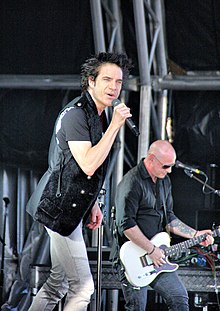 Train's Pat Monahan and Jimmy Stafford in one appearance (January 2011)

Train is an American alternative - band that in 1994 San Francisco was founded. Their music style is made up of country , rock and other genres.

The band was founded in 1994 in San Francisco by Rob Hotchkiss and Patrick Monahan. After they had decided to form a full band out of the duo, Jimmy Stafford came on as guitarist, Charlie Colin as bassist and later Scott Underwood on drums. In 1997 Train went on tour as the opening act with the Barenaked Ladies and the Counting Crows . Her first successful song was Drops of Jupiter (Tell Me) in 2001 , which won the awards for best rock song and best instrumental arrangement with vocal accompaniment at the 2002 Grammy Awards .

At the end of 2009 the fifth studio album called Save Me San Francisco was released . The first single was called Hey, Soul Sister and reached top positions in the international charts. From July 16, 2010, she toured the United States and Canada with John Mayer . In the 11th episode of the 6th season of CSI: NY the band came to a guest appearance, where they played their single Hey, Soul Sister in a studio . The singer Patrick Monahan played one of the main suspects. The episode, in which Kim Kardashian , Vanessa Minnillo and LaLa Vasquez, among others, had a guest appearance, was broadcast on ORF 1 for the first time on November 22, 2010 . At the end of the episode, which bears the title Overrolled , the band also played their 2003 single Calling All Angels . Train also has a guest appearance in series 90210 , season 4, episode 18. The sixth studio album, California 37 , was released on April 17, 2012 . The first single Drive By was previously released. Another three years later, the seventh studio album, Bulletproof Picasso, appeared with the hit single Angel in Blue Jeans . Another single, Play That Song , was released in 2016 . The accompanying album A Girl, a Bottle, a Boat was released in 2017.