Paul Michael Levesque (born July 27, 1969 in Nashua , New Hampshire ), better known by his ring name Triple H (acronym for Hunter Hearst Helmsley ), is an American wrestler , actor and producer. He is currently under contract with WWE , where he works as Executive Vice President of Talent and Live Events . In front of the cameras, he works as a wrestler and as Chief Operating Officer of the WWE. By marriage in 2003 he became a member of Vince McMahon's family, which founded the doctorate and continues to this day. He received the two highest titles in the league 14 times, making him one of the most successful players. Apart from wrestling, he had numerous appearances in film and television .

In private life, Levesque was in a tight relationship with his ring companion Chyna (Joanie Laurer) for a few years . However, the relationship was dissolved in 1999. At the same time, Levesque had married Stephanie McMahon, daughter of his boss Vince McMahon, as part of a storyline. The show relationship then carried over to their private lives.

Levesque and McMahon married in October 2003, and they have three daughters together (* 2006, * 2008, * 2010). The familiar relationship with the McMahon family thus acquired also gives Levesque some influence behind the scenes.

Levesque has also stayed loyal to the bodybuilding scene. He moderates the annual championship of the "Arnold Classics" and is the first wrestler with a front page and story in the bodybuilding magazine Flex .

He is a big fan of the hard rock and heavy metal band Motörhead , which also accompanied him musically on a number of performances (including Wrestlemania X-Seven 2001, Wrestlemania 21). They also recorded his performance music The Game and King of Kings, as well as the music from the Evolution table entitled Line in the Sand (written by Jim Johnston). On the 2002 album Hammered he can be heard in a duet with lead singer Lemmy Kilmister .

Levesque started bodybuilding at an early age . There he already achieved greater success as a teenager. In his youth he received many lucrative offers from various football and wrestling teams . But he turned down all offers because he wanted to realize the dream of becoming a wrestler since childhood. So he started after high school in Killer Kowalski's wrestling school to learn the basics of professional wrestling.

In March 1992 he made his debut in Kowalski's promotion IWF under the name Terra Ryzing , where he was allowed to win the Heavyweight Champion title a little later. Due to his stature, other doctorates soon became aware of him. For example World Championship Wrestling , which signed him in early 1994. Initially under his old ring name, and later as the snobbish French-Canadian Jean-Paul Levesque , he was only able to achieve few successes here. He left the WCW after just twelve months.

After leaving the WCW, he was able to sign a contract with the then World Wrestling Federation . His gimmick at the time was designed as a New England aristocrat . As Hunter Hearst Helmsley , it roughly coincided with the WCW gimmick, even if it didn't emphasize the French touch. Over the course of time, his current ring name Triple H (German: "triple H") was derived from the initials .

At Summerslam 1995, Levesque debuted Bob "Spark Plugg" Holly (later Hardcore Holly ). In the following months feud programs and a. against the Ultimate Warrior and Marc Mero before his career took a turn. He had become part of the Kliq , a notorious group of wrestlers who u. a. Shawn Michaels , Kevin Nash and Scott Hall were a part of who had a lot of behind-the-scenes influence. The latter two switched to WCW in 1996 and Michaels and Levesque wanted to say goodbye to them in their last matches. Although according to the script, the four celebrated publicly together during a show and exposed the show secret of wrestling. Since Hall and Nash had left the promotion and Michaels had to be kept present as WWF champion, the entire impact of this " curtain call " incident on Levesque was eliminated . He lost matches for months and was rarely used as a wrestler. Things only started to pick up again towards the end of the year. He was allowed to take the Intercontinental Championship title from Marc Mero and hold it for several months.

In 1997 the WWF began to promote and build up Levesque again when Levesque won the King of the Ring tournament. In the same year he presented his new companion Chyna , who at that time also became his partner in real life. End of the year closed one Levesque with Shawn Michaels together and created so the D-Generation X . In the course of this, Levesque was also able to win the European Championship . When Michaels failed due to injury after Wrestlemania XIV, Levesque was allowed to take over the leadership of the DX and henceforth act as Face . A feud against the Nation of Domination grouping followed, during which Levesque The Rock was allowed to remove the Intercontinental title. Due to a knee injury, however, he had to give it back and did not return until December 1998.

As part of the deal with the Corporation group , he was briefly separated from Chyna. As a result, Levesque was also switched to this group and made him the villain again. With a new look, Levesque, now dubbed The Game, was included in the WWE Championship title for the rest of the year and he was feuding with Steve Austin , The Undertaker and The Rock, among others . He was finally able to win this title from Mankind . However, his first title reign was short-lived, as he had to give the title back to Vince McMahon . Another three wins of the championship and various feud programs followed. After earning the WWE Tag Team title with Steve Austin in the spring of 2001, he tore a quadriceps muscle in his left knee in a fight and was injured again.

In 2002 he returned as Face and was allowed to receive the Undisputed WWE World Heavyweight title from Chris Jericho at Wrestlemania X-8 , which he was to give to Hulk Hogan a month later . In the summer of the year, the group D-Generation X reappeared, from which a feud program between him and Shawn Michaels was written. Levesque won the World Heavyweight Championship five more times between 2002 and 2005.

In the meantime, the Evolution group , consisting of himself, Ric Flair , Randy Orton and Batista , was founded. At Wrestlemania XX, Levesque should hand over the title to Chris Benoit . Years followed in which evolution was allowed to fall apart piece by piece and Levesque denied feud programs against all members. It started with Randy Orton, who took the World Heavyweight title from Benoit at Summerslam. Levesque finally received the title from him, only to give it back to the next resigned member of the group, Batista. After a brief hiatus, he was eventually allowed to feud with Ric Flair for the rest of the year. 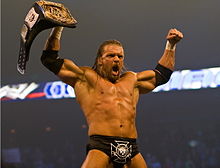 After an interlude with Big Show , he was involved in the action for the WWE title, but was not allowed to receive it. This was followed by a renewed reformation of the D-Generation X with Michaels and a feud program against league owner Vince McMahon. At the next major RAW event "Cyber ​​Sunday", the DX's next feud against Randy Orton & Edge began , which lasted until January 2007. Levesque, however, injured his right knee in real life in a match and was sidelined for six months.

He returned in a match against King Booker at the major SummerSlam 2007 event . He then feuded for a while against Umaga , who acted as McMahon's protégé. On October 7, 2007, Randy Orton was made the new WWE Champion at the No Mercy event due to an injury to John Cenas . Levesque was allowed to take the title from him, but that same evening there was a rematch for the title, in which Orton got the title again.

In the meantime there were a few isolated matches of the D-Generation X with Shawn Michaels. After that, Levesque found himself in a feud for the WWE title. In April 2008 he finally received this at the "Backlash" event.

On June 23, 2008, he was allowed to switch to the Friday show SmackDown . After a brief feuding program with The Great Khali , he continued to represent the Smackdown squad as the bearer of the highest title. For the Survivor Series on November 23, 2008, however, he had to surrender his title to the returning Edge. On February 15, 2009 Levesque was allowed to win the WWE Champion title at the major event "WWE No Way Out". With this title he switched to the Monday program RAW on April 13th of that year as part of the “Draft Lottery 2009” . On April 26th he had to hand over the title to Randy Orton. Together with his tag team partner Shawn Michaels (as D-Generation X) was allowed Levesque 13 December 2009 for the first time the Unified WWE Team Championship day win when Michaels and he the champions Chris Jericho & Big Show in a TLC Match at the big event "TLC: Tables, Ladders & Chairs" defeat could.

On February 8, 2010, they lost the Unified Tag Team Titles on The Miz and Big Show in a Triple Threat Tag Team Match. In a match against Sheamus, Levesque was injured and sidelined. 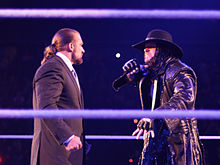 Levesque returned to Raw on February 21, 2011 for a feud against Undertaker, but took another hiatus after WrestleMania XXVII on April 3, 2011.

On July 18, 2011, he announced on Raw that he was taking over the office of WWE Chairman Vince McMahon ( storyline ). Since then, Levesque has served as WWE's chief operating officer on the shows . Nevertheless, he was still active as a wrestler and feuded against CM Punk and Kevin Nash , among others .

On April 1, 2012 at WrestleMania XXVIII there was another clash against the Undertaker in a Hell in a Cell match, in which Shawn Michaels acted as referee. The storyline ended with Levesque's defeat.

This was followed by a feud with Brock Lesnar , which culminated on April 7, 2013 at WrestleMania XXIX in a match for Levesque's possible career end , which Levesque was allowed to win.

At the major Royal Rumble event on January 24, 2016, Levesque won the eponymous Royal Rumble for the second time in his career and the WWE World Heavyweight Championship, which the previous title holder Roman Reigns had to defend for the 14th time. On April 3, 2016 at Wrestlemania 32, he lost the title again to Roman Reigns.

Various feuds and NXT invasion (since 2017)

At WrestleMania 35 , he won a no holds barred match against Batista , and his in-ring career was at stake. On June 7, 2019, HHH played a singles match against Randy Orton on WWE Super ShowDown, but he lost it.

Levesque published his first book with Robert Capriosein, entitled Making the Game: Triple H's Approach to a Better Body . Like many of his colleagues, Levesque was and is represented in the film and television landscape. In addition to a guest appearance in the series Pacific Blue - The Beach Police , he played his most famous role in 2004 in the film Blade: Trinity as the vampire henchman Jarko Grimwood . In 2011 Levesque also starred in the WWE-produced film The Chaperone , which was only shown in select cinemas in the United States for a short time and then released directly on DVD. So far, four DVDs have been released that reflect his career. Levesque was named Executive Vice President, Talent and Live events for WWE in 2011.

Triple H held the WWE Championship nine times for a total of 609 days.