He used to be asked for help with diseases such as epilepsy. With this patronage Valentin von Terni and Valentin von Rätien were called equally. With the admiration of those seeking help, the two figures became more and more mixed up over time.

Valentin von Terni, as bishop in Rome, is said to have won many people over to the Christian faith through healing the sick. This brought him an indictment in court and, around 268, he was martyred by beheading.

As a priest, Valentin of Rome is said to have married couples in Christianity despite the prohibition and was therefore executed on February 14, 269. In addition, Valentin gave the newly married couples flowers from his garden. According to tradition, the marriages concluded by him were of good fortune. 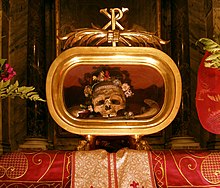 Alleged bones of Valentine in Santa Maria in Cosmedin

Several places in Europe claim to keep Valentine's bones as relics , although it is unclear whether these are actually Valentin of Terni. Some of these places are:

Saint Valentine is the patron saint of young people , travelers and beekeepers . He is called on insanity , epilepsy and plague . In addition, it should help to preserve virgin innocence and to a good engagement and marriage .

The Orthodox day of remembrance for Valentin of Terni is July 30th .

Valentin von Terni is actually represented as a bishop with a sword ( martyrdom : beheading) and a rooster (symbol for sacrificing his life).

The peasant rule corresponding to the commemoration day on February 14th reads:

In February 2017, the face of St. Valentine was reconstructed by the 3D designer Cicero Moraes using the skull from the Church of Santa Maria in Cosmedin in Rome .