This article is about the forget-me-not plant genus. For other meanings, see Forget Mine Not .

Forget-me-not ( Myosotis ) is a plant genus of the family of Borage Family (Boraginaceae). Varieties of some species are used as ornamental plants . The popular name probably comes from a German saga from the Middle Ages, according to which the little plant asked God not to forget it, and is translated into numerous other languages, such as Forget-me-not in English, as Ne m'oubliez pas in French or as 勿忘 我 ( Wùwàngwǒ ) in Chinese.

The forget-me-not species are annual or perennial herbaceous plants . The stems are usually elongated. The aboveground parts of the plant are short hairy or hairless. The alternate leaves are entire and usually hairy.

The flowers are usually in paired coils . They have little or no bracts . The peduncle is elongated after flowering. The flowers are radial symmetry and five-fold with a double perianth . The five sepals are fused together like a bell or funnel. The calyx is regularly five-lobed and in some species enlarges after the flowering period. The five-fold, mostly saucer-shaped, rarely bell-shaped to funnel-shaped crown is fused at the base. The petals are blue to violet, rarely yellow, white or pink, and in the bud position they are unidirectionally twisted to cover each other: they show sinistrors-contorte estivation - in contrast to the situation in Gedenkemein . The five gullet scales are bare, yellow or white. The five stamens, like the stylus, usually do not protrude from the corolla tube. The anthers are egg-shaped to elliptical. The scar is heady. The flowers are usually hermaphroditic and homogamous. Some species also produce purely female, gynodiacally distributed flowers, that is, there are plants with hermaphroditic and plants with purely female flowers. Pollinators are diptera , hymenoptera and butterflies . Self-pollination is possible. Many small-flowered species produce self-fertilizing ( autogamous ) flowers.

The four partial fruits of the Klausenfrucht are broadly lanceolate to ovate in outline, upright, more or less flattened and usually angular. The surface of the partial fruits is smooth and shiny, of brownish, black or rarely greenish color. Sometimes an elaiosome is also formed. The spread of the partial fruits takes place through various mechanisms: The protruding hairy calyx can stick to animals ( epizoochory ), the species with elaiosomes are spread by ants ( myrmecochory ). Endozoochory or spread by the wind ( anemochory ) are rare .

The genus Myosotis is common in Europe, Asia, Africa, Australia and North America. In South America only Myosotis albiflora occurs in the extreme south. 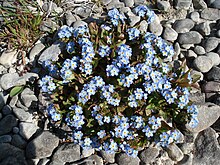 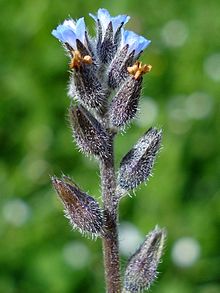 Myosotis comes from the Greek and means "mouse ear". Pliny used it to describe a species of plant that cannot be identified in detail with leaves similar to mouse ears. It is commonly assumed that Carl von Linné , who gave the genus its name, was guided by systematic points of view and was reminded of mouse ears when looking at the forget-me-not leaves. This thesis is questioned by botanists such as Helmut Genaust , because, in his opinion, the leaves are clearly spatulate to linear in shape and in no way resemble mouse ears. Linnaeus must therefore have taken the name from the vernacular from another family of plants.

The German plant name "Vergissmeinnicht" has been attested since the 15th century . According to Friedrich Kluge , the name derives from an old tradition : Because the blue flowers are reminiscent of the eyes of people who have just fallen in love, according to popular belief , forget-me-nots were often given away as a token of love and loyalty, usually from man to woman. This is why the name Fridiles auga ("eye of the beloved") is found in Old High German scripts as a plant name. However, the name "forget-me-not" was used earlier for the plant species Veronica chamaedrys ("germander speedwell"). The reason for this was the rapid perishability of the flowers and their easy breaking off, which was compared with the faithlessness that was said to be of men. Conversely, it is also narrated that the flowers should remind the woman of her lover and her promised loyalty. Forget-me-nots and honorary prizes were also called “loyal to men” in earlier times (today the plant species is called Lobelia erinus ). Other common names are "frog eyes" and "cat's eye", the latter in turn rather means the speedwell.

The valid first publication of the generic name Myosotis was in 1753 by Carl von Linné in Species Plantarum . Lectotype is Myosotis scorpioides L.

The genus Myosotis belongs to the tribe Myosotideae in the subfamily Boraginoideae within the family of Boraginaceae . There are around 50 Myosotis species worldwide , 41 of which are also found in Europe.

The species found in Central Europe are:

The other species found in Europe and the Mediterranean are:

Close up of forget-me-not flowers