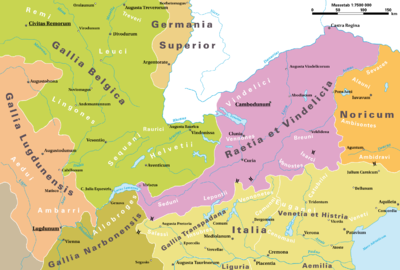 Roman provinces in the Alpine region around 14 AD

The Vindeliker (also Vindelizier ; Vindelici , also Vindolici and Vindalici ; the settlement area was called Vindelicia ) were a Celtic tribal group settling in the Alpine foothills between Lake Constance and Inn . They only appear on the occasion of the submission by the Romans in 15 BC. In the light of history.

The sources, in addition to Strabo especially the Tropaeum Alpium , the victory monument of the Alpine campaign, are neither clear nor completely identical. Above all, it is disputed whether the Cosuanaten / Cosuaneten, Runicaten / Rucinaten, Licaten and Catenaten strains mentioned in the Tropaeum are the aforementioned "Vindelicorum gentes quattuor" or whether these four are not listed by name and the others mentioned Tribes are. There is a correspondence with Strabo among the Likatiern (apparently named after the Lech (Licca), and therefore to be localized in its surroundings), but he also mentions the Estionen (near Kempten ) and the Brigantier (near Bregenz ). Damasia is called the main place of the Likatier and is described as the Acropolis; he is not identified.

Since the Raeter , with whom the Vindeliker were united by the Romans in the province of Raetia , are somewhat better known, one can conclude that the latter settled north of the Alps, probably as far as the Danube . The conquest was apparently quite easy for the Romans, so one can assume that the country was not particularly densely populated. Nevertheless, they were obviously a not inconsiderable quantity, since the tribal name, in addition to the official provincial name Raetien, has been around for a long time in all our sources, the literary texts and the inscriptions.

It remains to be seen whether the cities named by Strabo were really Celtic oppida , not just about the foundations of the occupation period. Only the oppidum of Manching near Ingolstadt , which was abandoned in pre-Roman times and therefore not mentioned in Roman reports, is really known, as it is clear on the other hand that there was no large Celtic town in Augsburg - despite some Celtic traces.

It is certain that a strip north of the Alps, in which, among other things, the Vindelik tribes settled, 15 BC. Was conquered by the Romans. Judging this military action depends on how one assesses Augustus' general political goals . In the past it was mostly assumed that a large pincer movement against the Teutons was planned, on the one hand to the east over the Rhine, and on the other hand to the north over the Danube. In contrast, today the offensive in the north is largely believed to be unlikely, which means that large-scale geostrategic planning is no longer necessary. Rather, as Mommsen had already assumed, it was a question of securing the Alpine passes and their apron. Apparently only a fairly narrow area was occupied at first, with a bulge down the Lech river into what is now Augsburg.

It is by no means the case that the campaign of 15 BC Chr. Stands there isolated; rather, both before and after, the Romans waged war in the Alps. This event became famous mainly because the Roman troops were under the command of members of the imperial family, which, however, can speak for a particularly costly action. In any case, the Romans under Tiberius and Drusus , the step-sons of Augustus, succeeded in subjugating the Vindelikers that summer. A continuity of the settlement has not been proven despite the Celtic sounding city names. As with the raiders, the Vindelikern were probably also forced to be evicted in order to break the will to resist; later there were at least four cohorts of that name. The area remained peaceful and was soon largely Romanized. Only the name of the city of Augusta Vindelicum remained from the Vindelikers .

The Vindelican tribes can be reconstructed from the Augustan imperial survey, which is based on the "geography" of Ptolemy , subject to smaller and more remote settlement areas of the Civitates . The civitates are listed as follows:

The location of the Brigantii around Bregenz and the Estiones around Kempten, thanks to Strabo's information, and the Breuni in the Inntal between Landeck and Innsbruck, thanks to archaeological evidence , are considered to be certain . The fact that those of Drusus were subjugated after them can be deduced from the fact that the Precursions in the vicinity of the Breuni can be found. Numismatics and archeology have to be used to locate the other tribes , which provide the knowledge that the northernmost Vindelics around the Oppida of Finsterlohr and Heidengraben lived outside the later province. In the later military area on the Limes between Regensburg and Passau there was no civitas, except for invaded buoy , which, as friends of Rome, had to keep their land available for military purposes. The Vindeliker were here already before 15 BC. Overlaid by these so that only around Biricianum Runicates sat, or before that also in the oppidum Finsterlohr . The Leuni would be in the Ostalb to locate the oppidum Heidengraben . These would then have been the northern neighbors of the Estiones and would later have been thought of as the rural population of the Civitas in the Günzburg-Faimingen area. As a result, the Consuanetes, who, according to the Tropaeum, fell before the Rucinates in the section of the Danube between the Lech and Altmühl estuaries around the Oppida of Manching and Kelheim , later only to be found south of the military installations.

The Benlauni would then have to be located in the area of ​​the oppidum near Fentbach (Medullum?) And the strong accumulation of the Viereckschanzen around Munich and Wolfratshausen. This also results in the four-tribe alliance of the Tropaeum between Lake Constance and the eastern Alb to the middle Isar. Since they were subjugated after the Breuni, the Precursors must have had their old settlement area between Füssen and Mittenwald and would then be conceivable as resettlers on the Auerberg. This is supported by the unproven Celtic finds on the Auerberg, contrary to the old assumption that the Liccatii were the inhabitants of the Licca (= Lech) river and the Auerberg was the Acropolis Damasia mentioned by Strabo. There are analogies to the medieval world of legends, according to which it was still told in the last century in the Allgäu that a "golden calf" was constantly walking around the church on the Auerberg, a horse without a skull galloping from the Auerberg or a headless "Ecklegeist" lives on the west side , undoubtedly all emerged from Celtic ideas. The linguistic comparison of the Greek word Damasia = Urberc (1167) = Auerberg (= mountain of the cattle) is no evidence of the gentes who built the fortifications here.

The tributary of the Poenus (Po) "Likias" could make the Liccates appear in the eastern border area to the Noricum. The placement in the SE on the border with the Transpadana (Northern Italy N Po) is also supported by the fact that the Liccates had invaded Italy. If Licca is translated from the Celtic as stone = salt, then they could have been the masters of salt mining around Reichenhall-Karlstein, in the tradition of the Illyrian Hallein-Dürrnberg. This is supported by numismatic finds, as the border area on the Salzach still falls within the area of ​​Vindelik gold coinage. Damasia could just as well represent the high-altitude salt mines. Strabo also wrote about the Likattier: "Above this, however, a few branches of the Noriker and Karner live close to the corner of the Adriatic Sea and in the area around Aquileia ..." So they are direct neighbors of the Noricum far away from Lech and Auerberg .

The following Roman auxiliary units were set up from the Vindeliker tribes: