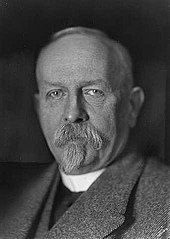 Waldemar Christofer Brøgger was born in 1851 as the son of the Norwegian print shop owner and publisher Anton Wilhelm Brøgger and his wife Oline Marie, b. Bjerring, born in Christiania, today's Oslo, and attended the local cathedral school . He first studied zoology at the Royal Friedrichs University and worked on the mollusks in the Oslofjord. Under the influence of Theodor Kjerulf , he turned to geology. With his fellow student Hans Reusch , he published works on glacier pots in the Oslo area ( Jættegryder ved Christiania, Copenhagen 1874) and the apatite deposits near Oslo, which also attracted international attention. Both became employees of Norges geologiske undersøkelse (Geological Service of Norway) and went on excursions to Corsica and Elba in 1875/76 .

In 1881 Brøgger became professor of mineralogy and geology at Stockholm University of Technology . He turned down a call to Uppsala in 1886 because of the prospect of a professorship at the University of Oslo, which he took up in 1888 as the successor to the late Kjerulf.

He was dean of natural sciences in Oslo several times and rector of the university from 1907 to 1911. In 1917 he resigned from his professorship to devote himself to research and science organization. Brøgger was also instrumental in founding the Geological Museum in Oslo (Tøyen), which was built from 1920 and opened in the same year.

The prehistorian and politician Anton Wilhelm Brøgger (1884–1951) was his son.

He worked in particular on the igneous rocks of the Oslo region and the differentiation processes in plutonites and volcanites . Brøgger also researched the Paleozoic Norway and Quaternary geology (fluctuations in sea level in the Oslo area). Many first descriptions of igneous rocks (e.g. carbonatite ) come from him , not all of them are still part of the petrographic nomenclature today. In 1923 his geological overview map for the Oslograben ( Geologisk Oversiktskart over Kristianiafeltet ) , developed with Jakob Schetelig, appeared on a scale of 1: 250,000.

The Mount Brøgger in East Antarctic Victoria Land and Brøgger Glacier on South Georgia him are named in his honor.