Coat of arms of the city of Bautzen

Full coat of arms of the city of Bautzen with spangenhelm 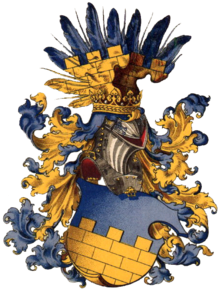 The official description of the coat of arms reads: "In blue, a golden wall with three battlements and strokes of the wall." Crest: "On a gold-crowned, inclined, silver spangenhelm with a blue-gold helmet cover, a closed blue flight , covered with a three-pinned golden wall."

The image of the three-tinned wall appears in the oldest known Bautzen city seal from 1283. The seal from the time of the rule of the Brandenburg Ascanians (1254-1319) shows a high, completely open gate with three battlements and two towers on both sides, each of which is also provided with three battlements and painted walls. The crenellated wall was first documented as the city's coat of arms in 1484, but it is believed that it was used as such over a century earlier.

Seal designed in 1363 for Wenzel IV: The king sitting on the throne, next to it seven coats of arms of his hereditary countries, which are placed around the edge of the seal in the form of circles, starting from the left: Bohemia, Luxembourg, Oberlausitz, Niederlausitz, Stadt und Sulzbach County, Brandenburg, Silesia.

The use of the coat of arms for the entire state of Budissin has been documented since 1363, when Emperor Charles IV included it in the seal of his son and designated successor, the two-year-old Bohemian King Wenceslaus IV, alongside the coats of arms of other crown lands. It is noticeable that the coat of arms of Oberlausitz on this seal contains two bare battlements without a wall. In another seal of Wenceslas from 1373, the coat of arms of Upper Lusatia is shown with a real wall without line marks, "on which two whole battlements rise in the middle and half a pinnacle on both sides, close to the edge of the shield."

In an Augsburg chronicle, according to the Augsburg delegates, it is reported from the funeral of Charles IV in 1378 that a flag with the battlements in the blue field from the Budissin region was seen among the representatives.

Bautzen had assumed a dominant position within the Upper Lusatian six-city federation , although Görlitz was the capital of the state of Görlitz and for a time also the larger city. The Görlitz Council therefore repeatedly resisted the establishment of the Bautzen coat of arms as the coat of arms for the federal government. The weakening of the six cities by the Pönfall in 1547 ensured that the Görlitz resistance disappeared and the coat of arms was able to establish itself for the entire Upper Lusatia in the following period.

Through his assistance in the election of the Bohemian king against Emperor Ferdinand II. , Elector Johann Georg von Sachsen received the margravate of Upper and Lower Lusatia as a pledge in 1623. As a result of the Peace of Prague , the two margravates were transferred from the Kingdom of Bohemia to the Electorate of Saxony . As Elector of Saxony and Margrave of Upper and Lower Lusatia, Johann Georg included the two coats of arms with the Lower Lusatian ox and the golden battlement wall on a blue field in his seal, whereby the Bautzen city coat of arms was officially recognized as the coat of arms of Upper Lusatia.

During the administrative reform of 1952 , from which the Bautzen district emerged in a new shape, the previous district coats of arms were abolished. After German reunification, the district had taken over the old city coat of arms again as the district coat of arms, but presented it in a slightly different shield shape with a curved upper boundary line to distinguish it from the city coat of arms. The approval by the Dresden Regional Council took place on January 14, 1992. The from the The district of Bautzen , which emerged from the Saxon district reform on August 1, 1994, took over the coat of arms, as did the once again enlarged district of Bautzen, which emerged from the district reform on August 1, 2008 .

Derived representation in other coats of arms

The communities of Cunewalde and Großschönau as well as the city of Niesky have coats of arms, which represent a golden battlement wall on a blue shield. In the Cunewald coat of arms, the church tower replaces the central battlement. The Niesky coat of arms is complemented by a cross and a hammer. The Großschöna coat of arms has five battlements, the stylized local mountain Lausche in the background, as well as two crossed web shooters .

Wikisource: The coat of arms of Upper Lusatia  - sources and full texts