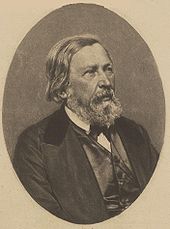 The Desor family were of Huguenot descent and had retained the French language in their German exile. Édouard Desor attended high school in Hanau and then studied in Giessen , where he of the Member Corps Hassia was, and in Heidelberg law , as it, and went in 1832 against him for his participation in the Hambach Festival police determined, according to Paris , where he met with Private lessons had an impact. His interest was now in the natural sciences and he began to translate Carl Ritter's geography into French . In Paris he also attended the lessons of the geologist Élie de Beaumont . From Paris he came to Bern to the family of the liberal-thinking doctor Philipp Friedrich Wilhelm Vogt , whom he knew from Giessen. In Bern, too, Desor lived on private lessons. In 1837 the naturalist Louis Agassiz , who was working on a large work on petrified fish, was looking for a secretary. Vogt recommended Desor, who then moved to Neuchâtel . As Agassiz's secretary, Desor familiarized himself with the natural sciences.

He then took part in Agassiz's research and in 1841 climbed the Virgin with James David Forbes . He visited Scandinavia to where boulders to investigate. In 1847 he proposed the Dan level ( Danium ), but at that time he still put it on chalk . Today the Danium is the lowest level of the Paleocene ( Palaeogene ).

In 1847 Desor went to the United States , got a job in the Coast Survey and took part in the geological survey of the mineral districts of Lake Superior and the state of Pennsylvania . In Michigan , a lake and Mount Desor are named after him. In 1848 he was elected to the American Academy of Arts and Sciences and in 1862 to the American Philosophical Society .

In 1852 he followed the call of his brother Fritz, who had settled as a doctor in Boudry near Neuchâtel, and returned to Neuchâtel. At the request of the naturalists Henri Ladame and Louis Coulon, he was immediately entrusted with scientific lectures to the auditorium , which corresponded to a continuation of the grammar school. He was involved in the re-establishment of the University of Neuchâtel (1866) and was professor of geology there until 1868 . In 1859 he was naturalized in Les Ponts-de-Martel (Canton Neuchâtel). He was elected to the cantonal parliament in the constituency of the city of Neuchâtel . He requested the restoration of the academy, at the head of which he worked continuously. He was also appointed a member of the school council of the Polytechnic and elected to the federal parliament . From 1866 to 1869 he represented the canton of Neuchâtel in the Council of States, after the parliamentary elections from 1869 to 1875 in the National Council. In 1873 he was President of the National Council .

In the winter of 1863–1864 he undertook a scientific trip to Algeria and the Sahara with Arnold Escher von der Linth and Charles Frédéric Martins . In 1866 he presided over the first anthropological congress in Neuchâtel.