It is located south of the historic old town of Quedlinburg at the address Am Schiffbleek 6 immediately north of the Bode and is entered in the Quedlinburg monument register. 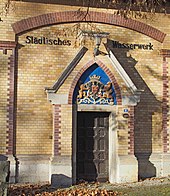 Door with Quedlinburg coat of arms on the former municipal waterworks

The waterworks was built in 1885. Other sources already mention the year 1881, which may mean the start of planning. The planning was carried out by the Dresden engineer Bernhard Salbach , the construction management of the construction work started in 1885 was carried out by Director Wolff. First of all, the suction and pressure line, the machine house, the suction tank in the yard of the plant and the water tower on the Kleiner Strohberg were built . The machine hall has a length of 15 meters. The waterworks was opened on March 12, 1886. Before the plant was commissioned, the city's water supply was ensured via private and public wells. With the establishment of the waterworks, the drinking water was conducted in clay pipes from the Brühl area to the works. From there the water was pumped into the elevated tank on the straw mountain. From there, the city was supplied with water at night when the plant's pumps were switched off. The urban pipe network initially comprised 19 kilometers.

The architectural design of the complex used elements of historicism and the Harz country house style . The administration building was built as a head building on a sandstone base . It is decorated with ornamental frameworks on the upper floor and is otherwise made of brick. The yellow clinker bricks are used to fill in the compartments and are also the building material of the massive ground floor. The corners and lintels of the building are highlighted by red bricks. The beam heads of the framework are decorated with roller profiles . Filled wood and stylized ship throats on the threshold were used as additional design elements . The timber was chamfered.

The administration building has three half-timbered gables . A slim tower that dominates the building and is erected on the north side is particularly striking. The round tower merges into a polygonal shape at the top . At the transition there are several stepped cornices . Its facade is decorated with red, diamond-shaped patterns. Inside there is a spiral staircase . There is a two-storey extension on it, which originally ended with a parapet balustrade . The pump hall is directly adjacent to the administration building. The windows of the hall form groups of three, each group being spanned by segmental arches, which in turn are supported on narrow wall pilasters . The facade of the pump hall is also structured using red clinker bricks. The niches and the cornice are highlighted accordingly. The interior of the hall was given a floor with tiles laid out in a diamond shape and a wall painting with ornaments made using stencils .

The roof construction of the building was carried out using Polonceau girders in a mixture of steel and wood construction.

In 1906 the machine hall had to be extended by an axis because another pump was to be installed for a second lifting line . The access to the hall was moved to the north. The machine hall originally had its entrance in the south-eastern part on the second axis. The portal was erected in front of the facade and decorated with a curved gable. Further modifications were made later. In 1927 there were three pumps, a diesel and a gas engine in the machine hall .

Moreover, part of the building complex, a fountain and a built in 1909 urinal .

In 1925 the Bode burst its banks and flooded the waterworks. The machines were quickly relocated to platforms and thus protected from damage. The pumps were in operation until 1972, when they were replaced by submersible motor pumps . The workshop of the drinking water master's area for the district of Quedlinburg was set up in the machine hall . In 1987 the water flow was 14,000 m³. In 1992 the building was rebuilt. The workshop moved out, instead an archive was set up on the ground floor of the old machine shop and offices on the upper floor.

Cultural monuments Am Schiffbleek in Quedlinburg