Bier Royal is a two-part television film directed by Christiane Balthasar based on the 2018 screenplay by Carolin Otto with Gisela Schneeberger and Lisa Maria Potthoff in the leading roles. The premiere took place on July 4, 2018 as part of the Munich Film Festival in the series Neues Deutsches Fernsehen , where the two parts of the two-part television series were shown in a three-hour screening. It was first broadcast on ORF on January 26 , 2019 and on ZDF on January 28 and 30, 2019.

After the death of Franz-Xaver Hofstetter, the patriarch and owner of the long -established Munich family business Arnulfbräu , there was an inheritance and succession dispute over the future direction of the company. On the one hand there is his second wife and former secretary Gisela, who feels connected to the traditional brewing trade. Opposite her is Vicky, the daughter of Franz-Xaver from his first marriage, who is returning to Munich after several years from the USA with the basketball star "Magic" Dan Dawson. She had never really gotten over the fact that Gisela was the new woman at her father's side just a few weeks after her mother's death. The investigative celebrity reporter Renate Rottmann reports regularly in her newspaper column Bier Royal on the machinations of the Munich beer dynasties.

According to the will, Gisela owns 45 percent of the shares in the company, Franz-Xaver's children Vicky and Patrick Hofstetter each own 25 percent. The remaining five percent belong to the workforce. Patrick, Gisela's son, who had not been interested in the brewery until then, is demanding a seat on the brewery's supervisory board. Vicky refuses to accept the will because her father promised her mother that he would bequeath 50 percent of the shares to Vicky. She is considering selling her stake to the American Tannhäuser Group, but offers Gisela the right of way. However, due to previously made investments in a new plant, she is financially unable to take over the shares. Vicky therefore demands from Gisela her position as managing director, Gisela subsequently changes to the supervisory board. Dr. Erich Maxlhuber, who is on Gisela's side after she covered his private withdrawals from the company.

Rosa Seidl, the Hofstetter's housekeeper for many years, tells gossip reporter Rottmann, among other things, that Patrick Hofstetter was already four years old at the time of Vicky's mother's death. With a number of unconventional ideas for innovation, such as vegan organic white sausages in the brewery, Vicky wants to make the brewery more modern, sustainable and ecological. With her concepts and the promise to create new jobs, she tries to get the employee representatives and Patrick Hofstetter to their side. Vicky intends to make the investments from the sale of the property on which the old plant stood. However, your concept is rejected with the votes of Patrick and Gisela. Gisela denies Rosa any further financial support for her recently deceased dog after Rosa claimed in a newspaper interview that she had an affair with Franz-Xaver. Thereupon Rosa offers Vicky her support in the power struggle against Gisela.

Patrick learns from Vicky that he had epileptic seizures as a child . Doctor Knoll had taken care of him and taken photos of him. Gisela had caught him talking to Dr. However, Knoll does not appear. Knoll was later a medical expert when Franz-Xaver had written his will, according to Rosa at a time when he was mentally no longer able to do so. Knoll admits to Vicky that he is a pedophile . She asks Knoll to sign a revocation for his false certificate, otherwise his inclination could become public. As a result, Vicky also demands her voting rights from Gisela; she does not want to sue the will to avoid damage to her reputation. In the press Gisela announces her retirement to the supervisory board, Renate Rottmann tries to research the real background. In doing so, she finds out that Maxlhuber wears cufflinks with the initials HG for Hermann Göring . Maxlhuber then shows her his closet with other Nazi devotional items and they spend a night together.

Mayor Ines Mangfall is demanding the land of the old plant for a housing project from Vicky after the city of Arnulfbräu had made a plot of land available for the new plant at a very affordable price. Vicky does not feel obliged to the respective personal agreement between her father and the mayor and plans to sell the property to the best bidder. After a block of shares in Arnulfbräu fell sharply in value, the bank asked Vicky for new collateral in the amount of 21 million, otherwise a loan would become due. She also wants to get rid of a stake in a bacon manufacturer in which Maxlhuber had invested, because that goes against her company philosophy. Maxlhuber informs Rottmann that Arnulfbräu is about to go bankrupt. He asks her to get the article published before Vicky can sell the shares. Maxlhuber wants revenge on Gisela and Vicky after he was kicked out of the company. Rottmann agrees, but in return demands ten percent of any profit. To promote the sale of the brewery, Maxlhuber meets with Jim Taylor from the American Tannhäuser Group. If the deal goes through, he should receive a commission. Vicky would like to use the proceeds from the sale of the property to secure the loan; she is postponing the eco relaunch until later.

Vicky begins an affair with Markus Brandt, her master brewer and employee representative. Her husband Dan confesses to having slept with his assistant, Ruth. Gisela meets with the call boy Oleg Lenkov in a wellness hotel and is then ridiculed in the press. After the suicide of Dr. Knoll has another epileptic seizure at Patrick's grave. Mayor Ines Mangfall refuses the Arnulfbräu brewery the license for the Oktoberfest , which had been believed for decades to be safe , Gisela sees this as the revenge of her friend Ines for the property deal that had previously failed. Vicky asks Gisela to change the mind of the mayor. After Rottmann had hoped for more from the affair with Maxlhuber, he annoyed her by saying that she was too old for him. Rottmann then informed Gisela of Maxlhuber's activities, and Gisela dismissed Maxlhuber. The bank does not accept the proceeds from the sale of the old property as security because the judiciary is blocking the sale. At the bank meeting, Patrick presented guarantees to over 15 million acquaintances from his BDSM club, from a weapons manufacturer and a pharmaceutical entrepreneur, who, however, contradict the new company philosophy. The sale of the company proposed by the bank is out of the question for Gisela, Vicky and Patrick.

The last resort is Dan, Vicky's husband and successful soy-growing businessman. He joins the family business with his assets. Vicky learns that she is pregnant. In addition to her husband, Markus Brandt is also a potential father. After Gisela finds out about this, she tries to get Dan to write half of his shares over to the baby. Patrick, his girlfriend and Oleg Lenkov get Dan drunk so that he can sign a donation agreement, but the plan fails. Vicky eventually gives birth to twin children, one of whom is dark-skinned.

One of the locations: the Gräflich von Moy'sche Hofbrauhaus in Freising 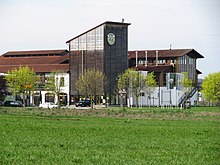 One of the locations: the Aying brewery

The shooting took place from July 3 to September 6, 2017 in Munich and the surrounding area. The film was shot in the Munich districts of Haidhausen , Schwabing and Freimann, as well as at the Chinese Tower and at the Gräflich von Moy'schen Hofbrauhaus in Freising . The filming location for the fictional Arnulfbräu brewery was the Aying brewery .

The film was produced by the German Moovie GmbH , with ZDF involved . Dorothée Kriener was responsible for the costume design, Rainer Plabst for the sound and Patrick Steve Müller for the production design.

The title was chosen in reference to the television series Kir Royal by Helmut Dietl . There are also analogies in the plot, for example in the form of the gossip reporter Renate Rottmann, who regularly reports on the family dynasty.

Rainer Tittelbach found on tittelbach.tv that the two-parter wasn't quite as bad as Dietl's Kir Royal , but similar in tone. “Irony and sarcasm, angry looks and return coaches are at the heart of communication. Everyone is closest to himself, and nobody is so specific about the truth. [...] The result is a humorous round dance in which everyone gets their fat off. "

Pierre A. Wallnöfer wrote in the Salzburger Nachrichten that anyone who loves the humor of Walking on Sunshine would be in good hands here , given their wickedness and intrigue. The basic idea of ​​a family in an inheritance dispute without income caps has a beard, the struggle for the legacy of the brewing dynasty is almost exclusively carried out by the actors.

Ernst Corinth said in the Hannoversche Allgemeine Zeitung that the film is “often more of a Bavarian farmer's theater than a social comedy”. The second part almost completely loses its momentum and even becomes unnecessarily dramatic towards the end. "But at least the final gag is nice."

Franz Kotteder wrote in the Süddeutsche Zeitung that the screenwriter was inspired by the television series Altes Geld (Old Money ), “but then did not dare to drive the plot to comparable absurdly evil heights. In Bier Royal it was only enough for a brewery heir who sleeps in a coffin and goes to sadomasochism clubs, and a dachshund named Kneißl. "