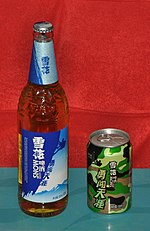 Snow beer bottle and can

A bottle of Tsingtao beer

Beer in China spread increasingly over the last century due to the popularity of local and imported beer brands. In addition, the international appreciation of Chinese beer has increased over the past decade. Although Chinese beer is primarily a lager , other types of beer can also be found here and there, such as B. the Tsingtao black beer.

With 440 million hectoliters of beer per year, the People's Republic of China is the largest beer producer in the world. That corresponds to double the amount of the USA, which came second.

China has a long history of beer production and consumption. Traces of a fermented drink made from rice , honey and fruits have been discovered on up to 9000 year old clay vessels from the northern Chinese province of Henan .

The oldest traditional beer recipe comes from the Yangshao culture and is approx. 5000 years old. Millet , barley , job's tears and tuber vegetables were used as ingredients .

The most traditional Chinese beer type is rice wine . Chinese ancestors developed various alcoholic beverages, the ingredients of which included cereals, fruits and plants. Alcohol is traditionally associated with happiness and joy. Drinking culture and brewing techniques have spread across the Asian continent with Confucian culture . Although China has a long history of alcohol production, its alcohol industry has only been established internationally for a few years. This is especially true when it comes to beer. The first Chinese breweries were established by Russians , Germans and Czechs in the 19th century.

Until a few years ago , beer was not a respected drink for the people of China , who traditionally preferred the Chinese baijiu schnapps . However, when the country increased the disposable income for Chinese residents with the economic reforms in 1990, both in the cities and in the countryside, the Chinese beer industry was increasingly able to catch up with Western competitors. Although the initial level of production was rather low, the market grew rapidly. Stakeholders in the beer industry believe that the Chinese beer market has not yet reached its full potential. Almost every brewing company in the world is now turning to the Chinese beer market.

The growing number of craft beer in the US was a direct reaction against the unification of beer. Similar patterns can be seen in the Chinese beer market. The Chinese beer market became much more homogeneous in 2001 with the entry of China into the WTO . Regular lager was the standard. Many Chinese people who lived in more rural areas were completely unaware that non-lager varieties existed. A large number of large-scale beer producers, who faced high competition in the Chinese market, ensured that marketing strategies were primarily geared towards branding and mass advertising. Improving the quality of the products was secondary. The beer industry became a very capital-intensive industry, with economies of scale being the biggest driver of growth. Tsingtao ramped up its beer production by buying up several regional medium-sized breweries in Henan . As globalization and the amalgamation of companies more and more unified what was on offer in the Chinese beer market, sophisticated beer drinkers sought other high-quality alcoholic beverages in the largest cities in China (such as Beijing , Shanghai and Guangzhou ). This trend was seen in the United States as early as the early 1990s. The increasing popularity of craft beer in China was a result of the increasing demand for other, high quality beers. After 30 years of opening, the Chinese market is firmly integrated into the world economy. This enabled Chinese people from different social classes to acquire knowledge about beer , wine , whiskey and chocolate . Craft beer in major Chinese cities supported this trend. Craft beer was characterized by smaller production volumes and local distribution (e.g. they cooperate directly with local restaurants and pubs). In many cases they are not included in national statistics for beer. Data on craft beer is rare and inaccurate. As a result, it's hard to say where and when the first craft beer brewery in China opened. Some unofficial sources say the first craft beer brewery was opened by a beer specialist from Texas in Shanghai in 2006. It was a special fruity beer that quickly became known on the local market in Shanghai, but the brewery went bankrupt just 1 year after it opened . The number of craft beer has risen sharply. This applies to cities like Beijing, Shanghai and Guangzhou. Craft beer breweries in smaller cities like Xiamen , Nanjing , Chengdu and Xi'an are slowly catching up.

Food safety is a major consumer concern. The pursuit of “safe and harmless” food has not really been met by the current market. Ongoing food scandals and the growing appreciation of food safety made most Chinese people think about the food they consume. Beer was also affected: according to various media reports, various large producers (such as Tsingtao , Yanjing and Snow ) have added formaldehyde to their beer. Craft beer breweries that value the authenticity of their products have an advantage over large producers because they meet consumers' demands for “safe and harmless” beer. Nevertheless, it remains questionable whether all craft beer breweries apply the same standards when brewing beer. In advertising campaigns by craft beer breweries, the authenticity of their ingredients is often advertised. The ingredients include basic ingredients such as barley and yeast , various fruits and other additives. As craft beer breweries become commercial , the demand for craft beer increases - the market entry barriers, however, remain unchanged, so it is to be expected that the problems with food safety will increase with the number of craft beer breweries.

In general, there are two categories of regulations that brewers must comply with:

Regulations of beer production, most of which are carried out by the General Administration of Quality Supervision, Inspection and Quarantine (AQSIQ; Chinese:中华人民共和国 国家 质量 监督 检验 检疫 总局); and general food safety laws , which are mainly implemented through regulations and laws from the Ministry of Health (Chinese: 中华人民共和国 卫生部). In order to protect consumers from health risks, the AQSIQ has imposed various standards for beer brewers and for the brewing process. The regulations affect almost every aspect of the brewing industry, from sourcing to labeling and from brewing to bottling the beer. The Standardization Administration of China (SAC ; Chinese : 国家 标准化 管理 委员会) has compiled understandable national standards for the brewing industry, along with detailed AQSIQ implementation guidelines.

Bottled and canned beer produced in China must be filtered and pasteurized ; Live yeast or other microbiological organisms must not be included.

The regulations and laws are designed for large-scale producers, filtration and pasteurization can remove flavor aromas and accordingly affect the taste of the finished beer. Strict bottling regulations do not provide craft beer breweries with distribution channels to sell their products the conventional way in order to compete with large producers

Snow beer is produced by China Ressources Snow Breweries Limited and is the best-selling beer in China with a 21.7% market share. It was only recently that it was able to overtake the Tsingtao Beer, which is the most exported Chinese brand and was the fifth largest brewery worldwide in 2017. Other brewing groups besides the Tsingtao are, for example, the China Pabst Blue Ribbon . Yanjing and the Zhujiang beer. Many large international breweries now have shares in or a joint venture with Chinese breweries. In addition, popular international brands such as B. Carlsberg already produced in China. Not only does this give manufacturers access to the Chinese market, but they can also provide local breweries with capital and know-how to improve the brewing process. Since 2010, craft beer festivals have become popular in Shanghai and Beijing . As of 2012, there are popular beer festivals in Shanghai, such as Shanghai International Beer Festival and Shanghai Beer Week.

Note: This is a list of major national breweries in China. However, the vast majority of Chinese breweries are regionally oriented.