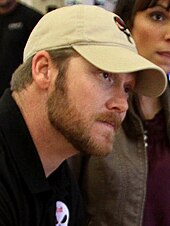 Christopher Scott "Chris" Kyle (born April 8, 1974 in Odessa , Texas , † February 2, 2013 in Erath County , Texas) was an American sniper . With over 160 confirmed kills, he is the sniper with the highest number of kills in US military history, according to the US Department of Defense . He received several military awards and medals.

His autobiography American Sniper became a bestseller. In 2014, the film adaptation of American Sniper by director Clint Eastwood with Bradley Cooper in the lead role grossed 517 million  US dollars worldwide .

Kyle grew up in several small towns in Texas due to his father's job. His father was a manager at the Southwestern Bell telephone company. The family was very religious: Kyle's father was a deacon , the mother a Sunday school teacher . He learned to shoot as a child and accompanied his parents on the hunt, and at the age of seven he got his first own rifle.

After graduating from high school in 1992, Kyle studied Ranch and Range Management at Tarleton State University in Stephenville , Erath County , Texas , but dropped out shortly before graduation.

In 1999 he joined the Navy SEALs and served there until 2009. He was a member of Seal Team 3. During his service, he participated as a sniper in four combat missions in the Iraq war and was promoted to Chief Petty Officer (CPO). Because of his high kill rate, the Iraqi insurgents offered Kyle a bounty of US $ 20,000. His farthest shooting distance to kill a person was 1920 meters.

After the end of his service, he founded the security company Craft International and the non-profit organization FITCO Cares Foundation in Dallas , with which he sold home fitness equipment for mentally and physically impaired veterans .

Activity as an author 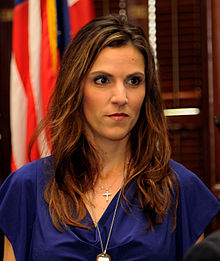 His autobiography American Sniper: The Autobiography of the Most Lethal Sniper in US Military History was published in early 2012 and became a bestseller with approximately 900,000 copies sold. The German edition Sniper: 160 fatal hits - The best sniper in the US military unpacks appeared in October 2012. In the book, he describes on the one hand his problems finding his way after the war and on the other hand his joy in killing enemy fighters, which he referred to as "barbarians". The autobiography was criticized by several journalists. Kyle has been accused of inhumanity and sadism, especially when he described how he delighted in the sight of enemies fighting for their lives. The Guardian journalist Lindy West described him as a hateful killer.

In an interview with Bill O'Reilly in January 2012, Kyle claimed he beat up former Minnesota governor and former soldier Jesse Ventura . Kyle claimed that Ventura "bad-mouthing the war, bad-mouthing Bush, bad-mouthing America" ​​was "bad-mouthing the war". Ventura then said he never met Kyle, wasn't beaten up by him, and he didn't speak badly about the army either. Jesse Ventura won a defamation lawsuit against Kyle. He was awarded $ 1.8 million in compensation. One controversy revolved around the claim by Kyle's family that the book's proceeds were donated to veterans' associations. Journalists, however, researched that a maximum of two percent of the three million US dollars had been donated.

Kyle was working on the book American Gun before he died . This is a work on weapons that played a special role in American history. Kyle's widow Taya finished and published this work. 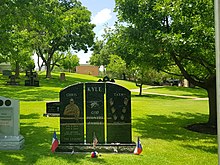 On February 2, 2013, Kyle and his friend Chad Littlefield were shot dead at the Rough Creek Lodge firing range in Erath County, Texas. The perpetrator was a veteran of the Iraq war, the 25-year-old Marine Eddie Ray Routh, who is alleged to have suffered from post-traumatic stress disorder , according to witness statements . However, the forensic psychiatrist who examined him after the crime declined the diagnosis. In his opinion, Routh suffered from schizophrenia . Routh had been treated twice in a mental hospital in the five months prior to the crime. Kyle had taken it to the facility himself, thinking that would give him better access to the locked Routh.

Kyle left behind his wife, son, and daughter.

A grand memorial service for Kyle was held on February 11, 2013 at Cowboys Stadium in Arlington, Texas , which was attended by nearly 7,000 people. A day later, he was buried in Austin at Texas State Cemetery after the hearse and a procession convoy of over 200 vehicles had driven the 300 kilometers from Arlington, lining the streets with thousands of spectators.

Routh was sentenced to life in prison in February 2015 despite pleading insanity. The court ruled that he had no prospect of early release.

In 2014 began under the direction of Clint Eastwood , the shooting of the film American Sniper in which Bradley Cooper took over the role of Chris Kyle. In the United States, the film , which was released in November 2014 as part of the AFI Festival , became the most successful feature film of 2014.