Christian Ludwig, born in Slovakia , came to Austria in 1944. He spent his youth in Aschach near Linz and on the Attersee in Upper Austria. As a successful Austrian sailing athlete, he won numerous international regattas . Between 1957 and 1962 he was Austrian national champion three times.

From 1951 he began to write short novels, write songs, draw comics and design stage sets. He quickly had to give up his desire to become an opera singer, because due to an illness he lost a large part of his hearing in childhood. From 1957 Ludwig studied stage architecture at the Academy of Applied Arts Vienna and in 1959 he studied painting with Eduard Bäumer , which he successfully completed in 1963.

Between 1963 and 1965 he created his first series of pictures, “Weather Images” and “Rainbow Anomalies”. Since the mid-1960s he has been friends with the protagonists of the Wiener Aktionismus group , with whom he also collaborates at times. Among them in particular Günter Brus , Hermann Nitsch and Gerhard Rühm , in whose actions he also participated. With his first so-called "object inventions" in the field of eroticism and everyday life, he made a name for himself in European Pop Art between 1964 and 1966. The object inventions typical for him such as "food ball", "food blue" or the "atter stick" were created.

In 1965 he moved to Berlin and showed his first exhibition there. From 1966, Ludwig took on the stage name Christian Ludwig Attersee , alluding to his time at the Attersee .

He spent 1971/72 with a DAAD scholarship in West Berlin . It was there that the cycle “Sailing Sport” was created, and Attersee has since become one of the most diverse artists in Austria.

Initially close to object and action art , he endeavored to develop a new form of total work of art by integrating music, language, photography, film etc. (examples of object inventions are "food ball" and "food blue", the "object vagina", " Prosthetic alphabet "," Attersteck "and" Saliva tint "). Later, drawings and panel paintings (mostly in acrylic painting ) on the subjects of sexuality and experience of nature become characteristic of him. One example is the provocative “Children's Room Triptych” from 1971, for which he was inspired by a picture book illustration by Fedor Flinzer . He sees himself as "the great loner of Austrian art of the 60s, [as] the antithesis to Viennese Actionism [and in] the second half of the 70s [... as ...] the founding figure of 'New Austrian Painting'."

His works are characterized by a figural-symbolic style, bright colors and dynamic brushstrokes. Frequently ambiguous associations and fantasies of an - just as individualistic as well as very Austrian - view of things with a tendency to sexual parody. Often the frame is also included in the work or text elements are embedded in the representation. 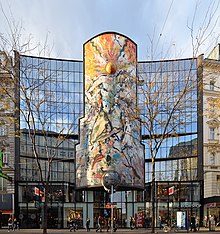 His exhibitions are mostly designed as productions with music and literature, sometimes together with artist friends. In 1984 he represented Austria at the Venice Biennale. In 1985 Attersee published his LP "Songs of Weather and Love". In 1986 the design of Vienna's first champagne ball in the concert hall followed and in 1987 a ship swing for André Heller's “Luna Luna fairground”. With the facade of the Attersee-Haus on Vienna's Mariahilfer Straße , which he designed in 1996 and a commercial building of an international textile chain, he designed the 210 square meter mosaic "Weather Merchant", the largest glass mosaic in Europe. In 2006 he wrapped the Vienna Ringturm in foil for six weeks . In November 2007, the 220 square meter indoor mosaic “Reichtum Erde” was completed in the Federal Geological Institute in Vienna. Attersee is one of the most internationally acclaimed Austrian artists.

In 1990 Attersee was appointed as an associate professor at the University of Applied Arts Vienna for the “master class for experimental design”. From 1992 he was given the "master class painting, animation film and tapestry" as a full professor. He taught at the University of Applied Sciences until 2009. He also taught at the International Summer Academy for Fine Arts in Salzburg .

Attersee is a member of the IG Bildende Kunst (Vienna) and the Künstlerhaus Vienna in the painter section.

Christian Ludwig Attersee is married to the head of the Bank Austria Kunstforum , Ingried Brugger . He lives and works in Vienna and Semmering as well as in Sankt Martin an der Raab in Burgenland. Since 1996 he has traditionally been donating the poster for the FIS women's ski races at his place of work, Semmering. The poster motif for 2018 caused a scandal because it shows the artistic representation of a naked skier and was sexist and was subsequently withdrawn by the organizer WSV Semmering.