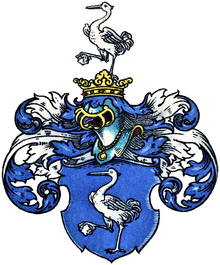 Family coat of arms of those of Danckelmann

Coat of arms of the Barons von Danckelmann from 1695 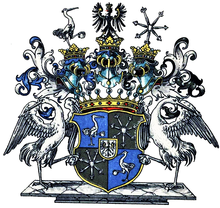 Coat of arms of the Counts of Danckelmann from 1798

Danckelmann , also Danckelman and Dankelmann , is the name of a German noble family that came from Westphalia .

The name Danckelmann is old in the monastery of Münster : in 1369 Bernhard Danckelman, cathedral cameral at the cathedral monastery of St. Paulus in Münster, documented it . In 1431 the bastard Drees van der Heghe sold a pension in the parish of Sendenhorst to Mr. Hinrik Danckelmann, priest.

The documentary detectable strain series of sex begins with Johann Dankelmann gen. Curetser as citizens of Rheine of 1530 to, Gografen appointed and 1534 under the name Johann Coritzer ( Kürassier ) as Fürstbischöflich minster shear mercenary captain against the Anabaptists is mentioned. He is said to have been born in Telgte in the Monastery of Münster in 1490, to have participated in the Sacco di Roma in 1527 and to have died in 1548. Also called "the Iron" because he the harness never took off, he is in 1534 at a loss of Jan Matthys have lost an eye (the "Prophet Matthias"). His wife was Gertrud (Gertraut) von Langen, daughter of Egbert von Langen, judge of Rheine and illegitimate son of the Münster canon Hermann von Langen († 1508). Johann Danckelmann is said to have been the illegitimate son of a priest of the same name. Johannes Danckelmann, documented from 1451–1495, was cathedral vicar at Münster. In 1483 he signed a document with his brother Severinus Danckelmann, who was the signatory of the city of Münster. The cathedral vicar Hieronymus Danckelmann called Horteleder, documented 1491–1540, in 1540 in his will Styneken consobrine mee, que mihi servit ad multos annos [(Chri) Stinechen, my cousin (on my mother's side), who served me for many years] and Albert Wernynck, the son of his illegitimate sister who was in Livonia . Egbert Danckelmann, documented 1559– † before 1585 or 1587, was also Münster Cathedral vicar and a son of the above-mentioned Gographer Johann Dankelmann called Curetser, named after his maternal grandfather, the judge Egbert von Langen.

The elevation to the imperial knighthood took place on July 23, 1689 in Vienna, the imperial baron class a little later on March 10, 1695 in Vienna. The corresponding baron diploma was issued on May 16, 1704 for the seven Danckelman brothers . It mentions that Eberhard turned down the offered count class in order to be in the same class as his brothers.

Adolf Albrecht Heinrich Leopold Freiherr von Danckelmann (1736–1807) was raised to the rank of Count of Prussia on July 6, 1798 in Berlin as the Royal Prussian State Minister.

The family coat of arms shows a silver watchful crane in blue. The shield image on the helmet with the blue and silver covers. According to the family tradition, an ancestor had saved the life of a Roman-German emperor through loyal vigilance, whereupon the emperor awarded him the accolade with the words “Thank you, man”. When the seven Danckelmann brothers were raised to the baron status, the coat of arms was improved so that a new symbol was added: seven sceptres around a ring. It stands for the unity of the seven brothers, who all held such important Brandenburg-Prussian offices that their government was called the rule of the Pleiades or the rule of the seven stars .