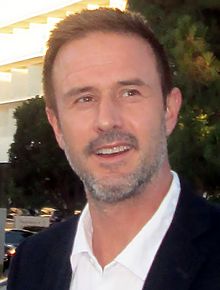 Both his grandfather Cliff and his father Lewis and his siblings Patricia , Rosanna , Alexis and Richmond were or are actors.

David Arquette trained with the Second City Theater Group and began his career in 1989 with Francis Ford Coppola's television series The Outsiders .

He was best known for his portrayal of the naive police officer Dewey in the horror film - tetralogy Scream (1996, 1997, 2000 & 2011). During the filming, he met his future wife Courteney Cox (known from the US sitcom Friends ), whom he married in 1999. Their daughter was born on June 13, 2004. In October 2010, David and Courteney announced their separation. In 2011 he appeared again on Scream 4 alongside Courteney Cox and Neve Campbell .

David Arquette is also active as a director and composer. In his spare time he tours the US with his band Ear 2000 .

To promote the film Ready to Rumble , David Arquette appeared several times in April 2000 at the WCW Wrestling Promotion. Although he had no experience in wrestling and only showed simple beginner actions, he became WCW World Heavyweight Champion in April 2000 . This decision by the leadership of the WCW is still mocked in many Internet forums and viewed as the death of the league. Arquette held the title for twelve days.