A drift current (also known as “drift current” and “drift current”) is a near-surface ocean current that is mainly caused by the influence of sustained winds with the same wind direction. It is greatest directly on the sea surface, but decreases rapidly towards the bottom. In the open ocean , the drift current causes only a slight change in the water level , while in inland and marginal seas an increase of a few centimeters to decimetres can occur due to damming effects on the coasts.

Other causes of ocean currents are the tides ( tidal current ) and density differences as a result of differences in water temperature and salinity (see also thermohaline effects).

Only with sustained global wind and thus eliminating the wind-driven circulation and without any temperature and density differences would sea exactly with the theoretical level surface of the geoid coincide.

Surface currents arise primarily from the thrust of the wind. To a greater extent, however, water masses are only set in motion by winds that blow from the same direction over a longer period of time . The main drivers on a global scale are therefore the trade winds and the westerly winds .

In addition to the wind, density differences in sea water also lead to currents. In the sense of the potential theory , the sea level can only form an equilibrium figure if all level surfaces up to the sea floor coincide with surfaces of the same density . Any disturbance of this equilibrium - especially due to temperature and salinity - results in lateral or vertical water movements, because water particles of different densities cannot stay next to each other. Quantities such as solar radiation , nocturnal cooling , cloud cover, evaporation , precipitation, etc. must therefore also be included in a calculation model .

Further noticeable movements are caused by the influx of the great rivers . They often extend far beyond the estuary . The absence of tributaries or precipitation have a similar effect. 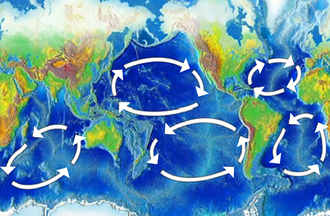 The five largest drift currents on earth. The North Pacific Vortex is shown in the top center.

Most large-scale ocean currents are driven by global wind systems such as the trade winds , monsoons and the zonal west drift , but are also influenced by regional weather patterns . Prolonged wind drift ultimately leads to a balance between the drift, the forces caused by gradients of temperature or salinity, the topography of the coast and seabed and the Coriolis force .

Drift currents mainly affect the uppermost water layers (approx. 200–300 m) and are therefore referred to as surface currents. In the vicinity of large land masses, most of these streams run roughly parallel to the coasts of the continents.

In general, the surface currents are balanced by the deep circulation, which captures the water masses of the cold water sphere down to the ocean floor . However, it is much slower than the near-surface drift current, since it covers a much larger volume. In the open sea, deep circulation is essentially meridional , but is hindered or diverted between the oceans by various thresholds (including mid-ocean thresholds ). Alexander von Humboldt already recognized during his research in South America that the cold deep water in the low latitudes on both sides of the equator must be continuously replenished from polar latitudes.

Great ocean currents can be tracked for hundreds and thousands of kilometers; the most famous are the Gulf Stream and the Benguela Current , the North Pacific Vortex is one of the five largest circular ocean drifts.

Small-scale drift currents mainly dominate the inland seas and are much more variable because they are more directly related to the wind direction. The smaller an inland sea or a bay , the more likely it is that a water stagnation occurs on the leeward side and the faster the drift current changes into the opposite compensating current .

The conditions in large sea ​​bays can also be dominated by local drift currents, but eddies with larger-scale drifts also occur. The conditions are more complicated in the Gulf of Guinea and especially in the Gulf of Mexico , where the radiation balance plays a major role.

In addition to drift currents, there is the reverse phenomenon, compensation currents : They occur when e.g. B. the water “dammed” in an inland sea by the wind pressure on leeward begins to flow back.