An energetically highly stimulated system fades into the basic state with the emission of electromagnetic impulses. The cause is mostly electrostatic charging processes, for example from thunderstorms or nuclear weapon explosions , but also in special electrical circuits . In the visible spectrum, this process can be perceived as a flash of light.

The interaction of the low-frequency electromagnetic radiation components with free charge carriers in metals and semiconductors induces strong, briefly fluctuating currents there . In electrical devices that are not shielded or are insufficiently shielded, this can lead to malfunctions or even total failure or even the destruction of individual electronic components. For technical applications, the term is mostly limited to the relevant frequency spectrum with wavelengths between 10 mm and 10 km. 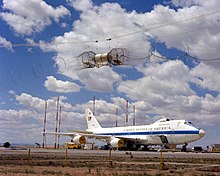 Boeing E-4 B in a NEMP simulator

The term impulse in this context should not be confused with the term mechanical impulse from the field of physics .

Mathematically, an impulse can be represented as a unique time function f (t) (see impulse function ) of a physical quantity such as field strength, voltage or pressure. If a pulse having the period T continuously repeated, one speaks of a pulse with the pulse frequency f  = 1 / T . This definition of the term follows the German-language specialist literature; In particular, reference is made to the theoretical electrical engineering by Karl Küpfmüller and standardization.

In the English-language literature, however, there is usually no distinction made between the terms pulse and pulse . The conceptual separation that is common in German has advantages for understanding. In particular, a pulse can be represented by superimposing a discrete series of harmonic oscillations. For an impulse you need a continuous superposition of harmonic oscillations. A single pulse thus has a continuous spectrum, while the periodically repeated pulse sequence has a discrete line spectrum.

Natural sources and their effects

Lightning are natural discharge processes in the atmosphere , which lead to a massive electromagnetic influence, especially in the area of ​​the lightning channel and the point of impact. This effect can be transmitted through metallic cables and thus cause extensive damage. This electromagnetic pulse is also English Lightning Electromagnetic Pulse , abbreviated LEMP called.

Magnetized plasma from a solar flare can induce low-frequency currents over a period of minutes to hours in spatially extensive energy supply networks, which can, for example, lead to saturation phenomena in power transformers . The consequence can be power outages .

Artificial sources and their effects

Strong magnetic pulses can be generated by high current pulses in coils. They are used to investigate the effect of high magnetic fields on matter or, for example, for magnet transformation . Such coils can withstand fields of up to around 100  Tesla , but they are destroyed at higher fields. For mechanical protection and magnetic shielding, appropriate laboratories are housed in massive reinforced concrete buildings. The current pulses generated by the capacitor discharge reach a few 100 kiloamps and last in the millisecond range.

Switching off inductances also leads to electromagnetic pulses. The attempt of the electric current to continue to flow through the inductance during the switching-off process creates very high voltages on the coil, which can lead to spark formation. The interference pulses propagate on lines, cause signal interference and under certain circumstances have effects similar to electrostatic discharges. Such impulses occur, for example, when electric motors , contactors and other inductive components are switched off. A frequent source of interference of this kind is the ignition system of Otto engines, in which the effect of the voltage increase is exploited like a spark inductor .

Mention should also be made of the flow compression generator , which, together with a Vircator EMP, generates in the double-digit gigawatt range in the time range 0.1 ... 1 µs.

Strong laser pulses also trigger an EMP when they interact with matter. Laboratories for research purposes with laser radiation powers up to the petawatt range therefore have radiation protection and corresponding further measures to protect the communication networks.

Weapons and their effects 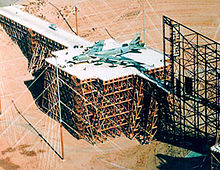 Military EMP test site ATLAS-I with a Boeing B-52 as test object at Kirtland Air Force Base , USA

The picture shows the chain of effects of a nuclear warhead deployed over 100 km and the emergence of the EMP resulting from it.

Up until the ban on above-ground nuclear weapons tests , such explosions actually took place and damaged or destroyed supply networks and ships in the affected areas, for example in the Starfish Prime nuclear weapon test over the Pacific on July 9, 1962.

High-energy gamma quanta in the energy range of a few MeV upwards, which are emitted in such a nuclear explosion , cause sudden ionization of the molecules in the uppermost layers of the earth's atmosphere, known as impact ionization. In the process, electrons are knocked out of the molecules , a large proportion of which receives the original direction of movement of the gamma quantum that has hit it and thus moves towards denser atmospheric layers. Due to their high energy, some of these free primary electrons cause further impact ionizations and in the process release further secondary electrons. The negative electrons flying towards the earth and the remaining positive air ions form a transient electrical dipole . Due to the deflection of the moving charge carriers in the earth's magnetic field as a result of the Lorentz force , a transient magnetic dipole is created.

This temporally and spatially rapidly changing charge and current distribution of the dipoles in the upper layers of the atmosphere creates a broadband, transient wave field, which only produces the actual electromagnetic impulse, which is responsible for impairment of electronic devices and electrical systems.

In contrast to the LEMP, a NEMP is characterized by its particularly steep rate of rise and thus broadband. After just 4 ns, 90% of the maximum value is reached.

Similar effects also occur with nuclear explosions near the ground. There, however, the effect of the NEMP is limited to a smaller spatial area and is superimposed by the thermal and mechanical effects of the nuclear explosion.

Electromagnetic impulses can destroy electrical and above all electronic components in the effective area and are therefore also used by the military in the form of ground-based EMP weapons (see also: electronic warfare ). As a radiation source is used for this. B. the directed microwave radiation from relativistic magnetrons , which, fed from capacitors, deliver peak powers in the terawatt range .

The Protection Commission at the Federal Minister of the Interior wrote in 2011:

"The EMP can disrupt or destroy all electronically supported machines from airplanes to pacemakers. It endangers the central systems of broadcasting, rescue services, hospitals, energy supply and rail transport - with a corresponding danger for warning systems, patient care and evacuations."

An American commission came to a comparable conclusion in 2008.

Protection against EMP is also known as EMP hardening. In particular, spatially extensive electrical conductors, such as energy supply and copper telecommunication networks, are at risk from LEMP or NEMP. NEMP also endanger metal pipelines. While energy supply networks can hardly be protected, isolating transmitters or amplifiers can be built into communication lines or they can be replaced by fiber optic networks .

Pipelines can be made of insulating materials in places or entirely for protection. Systems can be protected by a Faraday cage and protective circuits ( galvanic separation , surge arrester ) on all electrical supply lines. In the case of radio systems , however, the shielding can only be partially achieved, since their antennas must not be shielded so that they can conduct the electromagnetic fields to the detector, which is their primary task.

Due to their exposed position during flight, aircraft are exposed to stronger electromagnetic impulses in certain situations, such as in the vicinity of powerful radar systems, even in regular and civil applications. The necessary for the protection measures and limits, the term HIRF for English High Intensity Radiated Fields summarized.

EMP in the media

In various film and television productions as well as video games, EMPs appear again and again, usually in fictional form. Examples of this are the movies James Bond 007 - Goldeneye and Matrix , the TV series 24 , in whose fourth and eighth seasons an EMP causes serious damage, and Dark Angel , where an EMP in the pilot film ensures that the USA is set back in terms of development, as well as in of the German series Einstein , in whose finale of the first season two electromagnetic impulses are triggered.