The European Karate Federation (EKF) is a European karate umbrella organization whose headquarters are in Madrid . The president is the Spaniard Antonio Espinos, who also heads the world association WKF.

It was founded on December 15, 1963 as the European Karate Union (EKU) at the 1st European Karate Congress in Paris. The first president was the French Jacques Delcourt , his vice-president the German Otto Brief. In 1993 the association was renamed EKF - at the same time as the merger of the WUKO and ITKF associations to form the WKF world association .

The purpose is to promote karate. This includes creating uniform karate rules throughout Europe and organizing and holding European championships for young people (14-16 years), juniors (16-18 years) and adults. This has been happening annually since 1966. 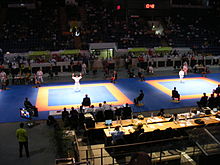